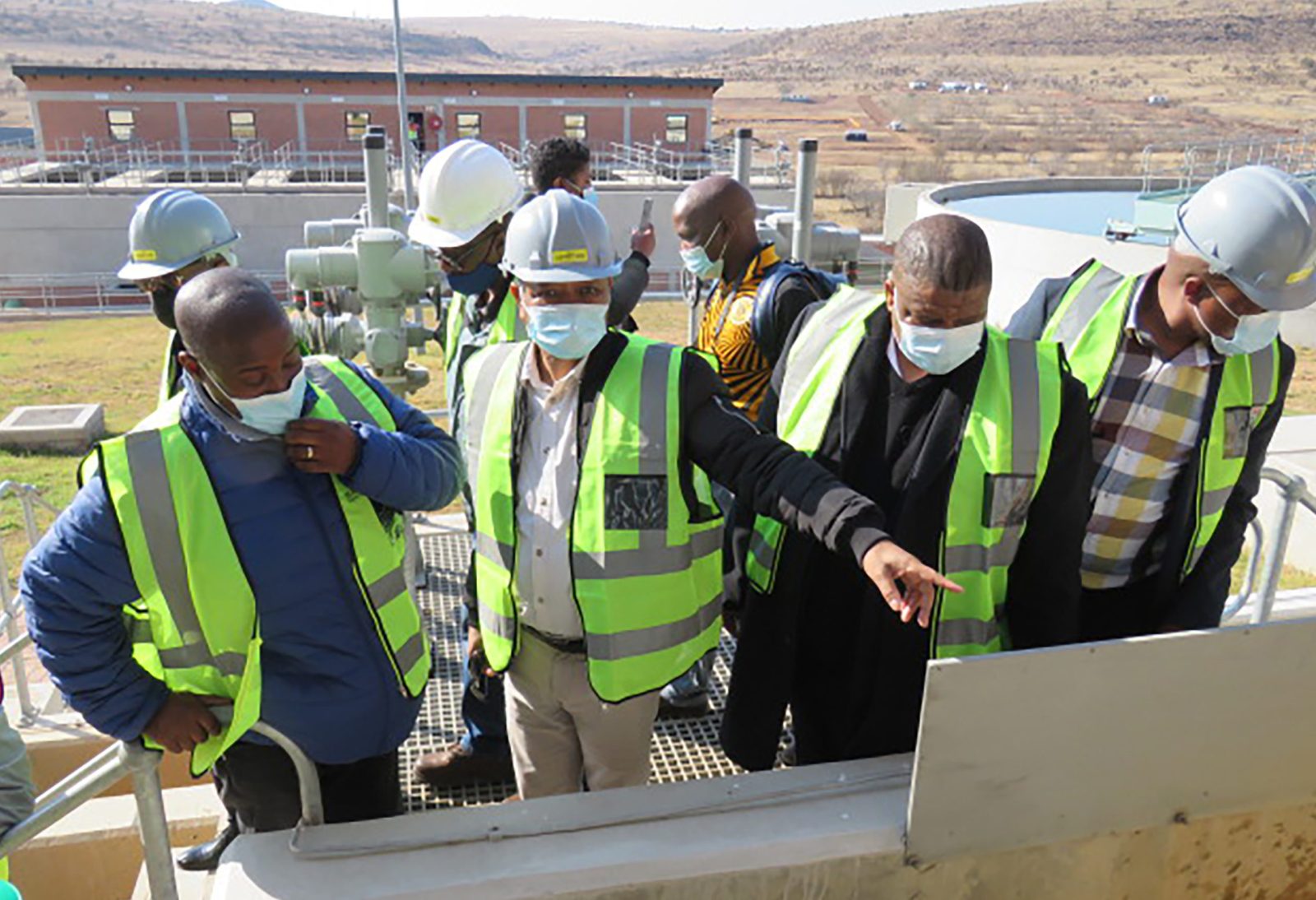 Minister of Water and Sanitation Senzo Mchunu on a visit to theTsomo River abstraction and water treatment works in Tsomo on Thursday. (Photo: Tembile Sgqolana)

Residents of Butterworth will have to wait three more years for water to come out of their taps — the long-awaited Tsomo River abstraction and water treatment works still need a R230m pipeline installed to connect it to the town.

Once completed, the R700-million Tsomo River abstraction and water treatment works in the deep rural town of Tsomo in the Chris Hani district municipality should bring water to 236,000 people from 47,000 households — 78,000 of those people live in 129 rural villages scattered throughout the Mnquma local municipality which falls under the Amathole district municipality (ADM).

But the promise of water is still a long way from being realised — a lot of work still needs to be carried out, including the construction of a 7.5ML concrete reservoir and a 23m gravity bulk line with a diameter of 450mm, as well as electrical and mechanical pump installations, among other work.

Even though the project began in 2016 and was due for completion in 2018, it was again delayed until this year.

According to the Minister of Water and Sanitation Senzo Mchunu, who visited the project on Thursday with his deputy Dikeledi Magadzi, the building of the river abstraction and water treatment works was 99.9% complete — all that remains was to build a reservoir and install a pipeline to Butterworth.

“The pipeline will cost R230-million and it will take three years to complete,” he said.

Mchunu said it was unacceptable to have a project delayed by six years. “We are going to work together with local mayors to fast-track the project,” he said, while not elaborating on what caused the delays.

“We need to have a report detailing the phases and how much each phase costs,” he said.

The minister said water from the project would not only be used for drinking purposes, but for agriculture too. “We want water for human consumption, wildlife, factories, businesses and sanitation,” Mchunu said.

Mnquma Business Development Forum member Zukile Mbelani said businesses in Butterworth had closed due to a lack of water.

“Businesses are closing and leaving Butterworth for bigger cities… However, we are in talks with two breweries who have left Butterworth, trying to bring them back and save people’s jobs,” he said.

Mchunu also visited the Ndlambe Emergency Bulk Water project. The R172-million project includes the construction of a 2ML per day desalination plant and a 3ML per day wastewater reclamation plant. Once completed, the project would provide potable water to communities in Port Alfred. DM/OBP