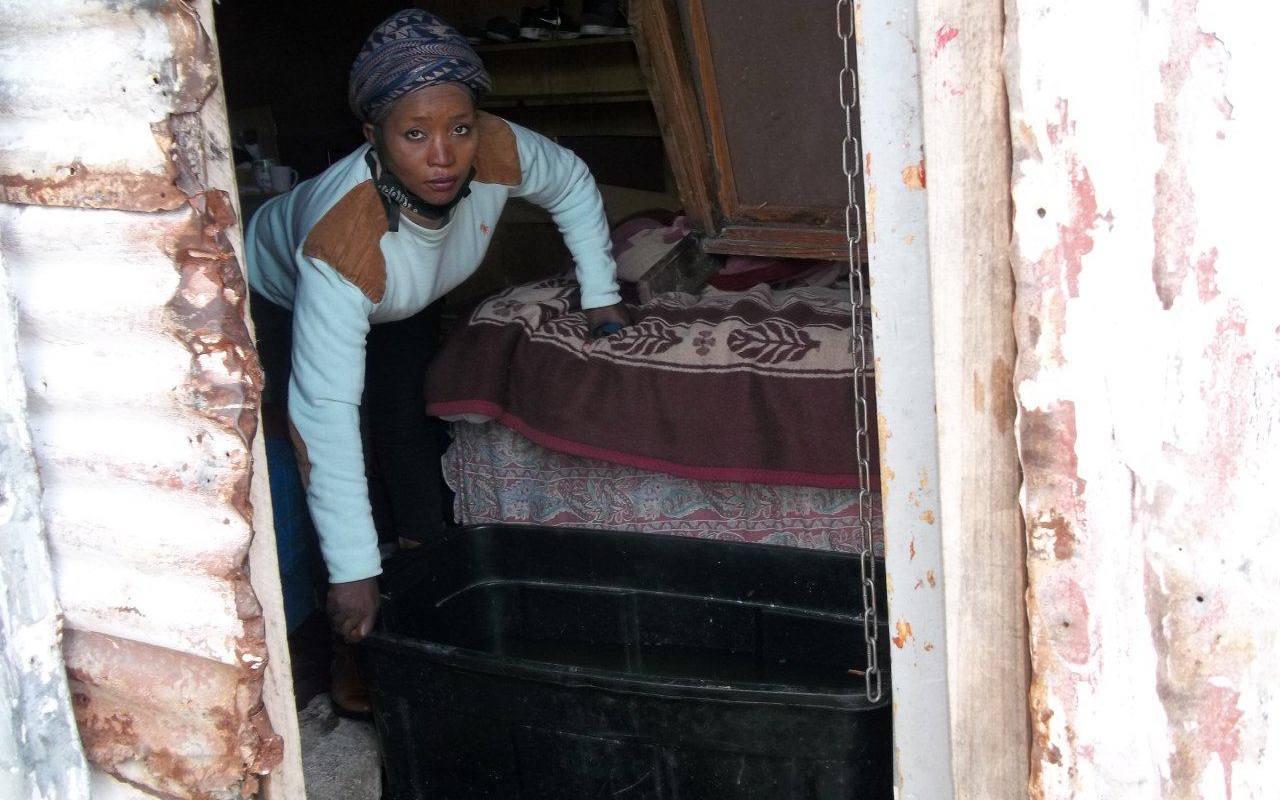 Zanele Mendel shows the bathtub next to her bed where her eight-month-old baby drowned on Saturday. The tub was filled with rainwater which had been flooding her shack at Noxolo Xawuka informal settlement in Khayelitsha. (Photo: Vincent Lali)

The community of Noxolo Xawuka informal settlement in Khayelitsha, Cape Town, is up in arms after an eight-month-old baby drowned in a plastic bathtub filled with rainwater.

When GroundUp visited baby Ayakha’s mother, Zanele Mendel, a bathtub filled with water was still next to her bed which was surrounded by water that had flooded her shack.

She pointed out the gaps in the roof of her shack where rainwater pours in when it rains. “I tried but failed to find someone who could give me plastic sheets to cover my roof and prevent the rain from coming in.”

Recounting the traumatic moments of last Saturday, Mendel explained that her son had fallen off her bed and into the bathtub after she left for work after 8am.

“I told [a relative] to watch over my sleeping baby as I was leaving for work,“ she said. “When she woke up and came to dress my Ayakha, she found him dead, lying inside the bathtub, his stomach filled with water.”

Mendel said she had started working as an assistant at a fruit and vegetable stand near Makhaza Mall three weeks ago after struggling to find a job for years.

“I struggle to fall asleep at night because I think about my baby. I have to take sleeping tablets,” said a tearful Mendel.

On Wednesday, dozens of residents protested outside the sub-council office, demanding that the budget for Ward 96 prioritise the provision of basic services in Noxolo Xawuka.

The group picketed under the banner of Intlungu Yasematyotyombeni, a social movement advocating for basic services in newly established areas. Sub-council manager Lulamile Rorwana accepted the residents’ memorandum on behalf of the City of Cape Town and promised to address the matter with senior officials.

Community leader Nomasomi Bhiyoza said baby Ayakha’s death angered many residents. She said residents are being asked to donate R10 because Ayakha’s parents are struggling to cover the costs to bury him. “They don’t even have tea to give to mourners who come to support them,” he said.

Since the shack dwellers moved to Noxolo Xawuka last year, Bhiyoza said that eight shacks have burnt down because there was no water in the settlement to extinguish the fires sooner. She said a ten-year-old boy was also electrocuted by illegal wire connections while playing with his friends about two weeks ago.

“Our kids are dying because of the environment we live in and because we don’t get basic services,” she said.

He said funds allocated for walkways should be used to install taps, toilets and clean roads covered in faeces water from damaged drains.

Mayco Member for Human Settlements, Malusi Booi said that the City was no longer able to provide flood kits to residents unless the area had been declared a disaster. “Funds have run out. The City assists where it can with soft relief or other interventions where possible,” he said.

“Numerous newly established communities are demanding services but the City is currently unable to cater for these unplanned settlements. Existing recognised informal settlements are prioritised on the basis of available resources which are not limitless,” he said.

Booi said that because the majority of new informal settlements have been established on unsuitable land, providing services is either challenging or not possible. DM