Why are you looking at me? Photographs by Jean du Plessis 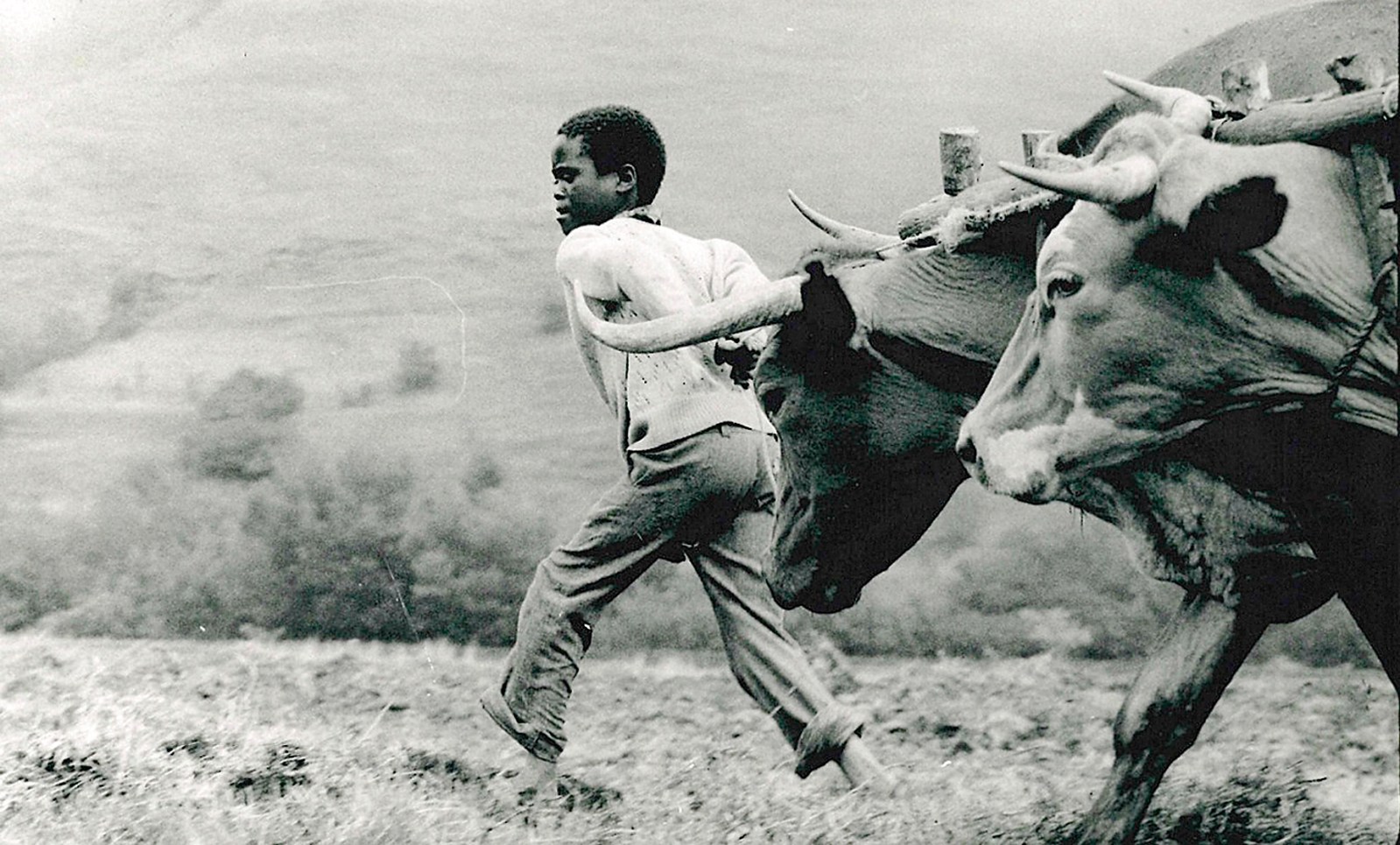 "Even after Matanzima’s tractors had gone." In a place called Mvenyane, I took a photo of a young boy leading cattle, ploughing deep, rough furrows. It was a fine image, printed in the milk room. In those days, on principle, I would take copies to people I had photographed. It took a full day’s walking, the print my only map. There I took another photo – a grandfather staring at the picture of the boy in fading light. As I did, I realized this might take my entire life. And in many ways, I have, ever since, been walking up and down that Mvenyane mountain. Image: Jean du Plessis

Jean du Plessis’s images reveal the threads of connection that hold us all together simultaneously with the strenuous efforts we as humanity make to create barriers, divisions and limit that connection.

Photographers come in all stripes: those who pride themselves on dispassionate observation, those who wish to sanctify or elevate their subjects; those who wish to reveal the hidden, to shock or amaze; those whose stated objective is simply to record; those who are scientists and wish to observe more closely. Aesthete, moralist, sociologist, scientist, voyeur, artist, historian… The list is endless.

Everyone with a cellphone is now a photographer, it seems; and everyone with a social media presence is a published photographer. So why another printed volume of photographs, presented the old-fashioned way, ink on paper, you may ask?

In the 20th century, wars and the spread of the printed media saw the rise of photojournalism. The magazine era gave the extraordinary photojournalists of the thirties through to the sixties a space in which to flourish in the era before TV dominated the visual element of newscasting and storytelling.

And now the internet age has brought about another shift: everyone armed with a cellphone or digital camera has become a potential commentator or news channel, and the internet has allowed for an explosion of visual witnessing to be published and consumed – some of it exceptionally good and perspicacious, and some tawdry and narcissistic.

I opened by saying that photographers come in all stripes. Of what stripe is Jean du Plessis?

Definitely a sociologist. Humanitarian. Humanist. Intellectual, but with deep feeling. And moral: without preaching, he is decidedly a moralist. The challenge of photographing without voyeurism or a cauterised heart, of wielding a camera empathetically yet honestly, is enormous. And it is one well met by Jean.

His slim volume of photographs, each with its own story printed beside it, is both closely related to this explosion of street photography, and also, in key ways, quite distinguishable from it.

Unlike the classic photojournalist, Jean is not dispassionate in his wielding of his camera. On the contrary, he is passionately engaged with his subject matter, and seeks through his image-making – aided by his incisive words – to discern coherence and meaning in this often bewildering world. His images reveal the threads of connection that hold us all together simultaneously with the strenuous efforts we as humanity make to create barriers, divisions and to limit that connection.

And so in each image there is this tension between connections and boundaries. See, for instance, the image We found our way in, eventually : the boundaries are so powerful, the connections so tenuous, the bravery of the boys at the door so strong. The lens confers dignity – the dignity of being seen – in these photographs that he shares with us.

Of course it is not always so – lenses can remove dignity all too easily. But look at Please, Sir, can you help me? (another image in which connections and boundaries interplay) and the dignity conferred by the photograph (and the conversation) is so evident, as it is in many of the other images in this book.

As Susan Sontag says in her classic collection of essays On Photography (Penguin, 1977):

“The ultimate wisdom of the photographic image is to say: ‘There is the surface. Now think – or rather feel, intuit – what is beyond it, what the reality must be if it looks this way.’ Photographs, which cannot themselves explain anything, are inexhaustible invitations to deduction, speculation, and fantasy.”

After a career of more than 30 years in human rights organisations ranging from humble community bases to NGOs to the UN, Jean has travelled a great deal and collected a wealth of photographic material. Inspired by the six-word story, “For sale: baby shoes, never worn” (usually attributed to Ernest Hemingway), Jean used this as a test to whittle down the candidates for inclusion in the book. No matter how attached he was to an image, if it could not immediately evoke a six-word story for him, it was cast aside.

This slim volume is the resultant work of photographs that appear together with their six-word stories and elaborations on these. It richly rewards slow and patient consumption.

To quote Sontag once more: “Photographs cannot create a moral position, but they can reinforce one – and can help build a nascent one.” I would venture that it is impossible to peruse these photographs without being morally challenged, and morally encouraged. Strongly recommended. DM/MC/ML

Available from the Book Lounge or from [email protected].

Simon Sephton is a photographer with a particular interest in water photography. He has held a number of solo exhibitions featuring his water abstracts.  He is a publisher by profession (but not the publisher of this book!) and has been passionately taking photographs from a young age. He lives in Cape Town and walks the Peninsula mountains with his dogs in pursuit of pleasing images and peace.

His water photographs hang in private collections in South Africa, England, France, Norway, Denmark, Japan, USA and Switzerland. His work can be seen at simonsephton.com and on Facebook.