The discovery of natural gas in Mozambique has produced tragedies, not economic promise 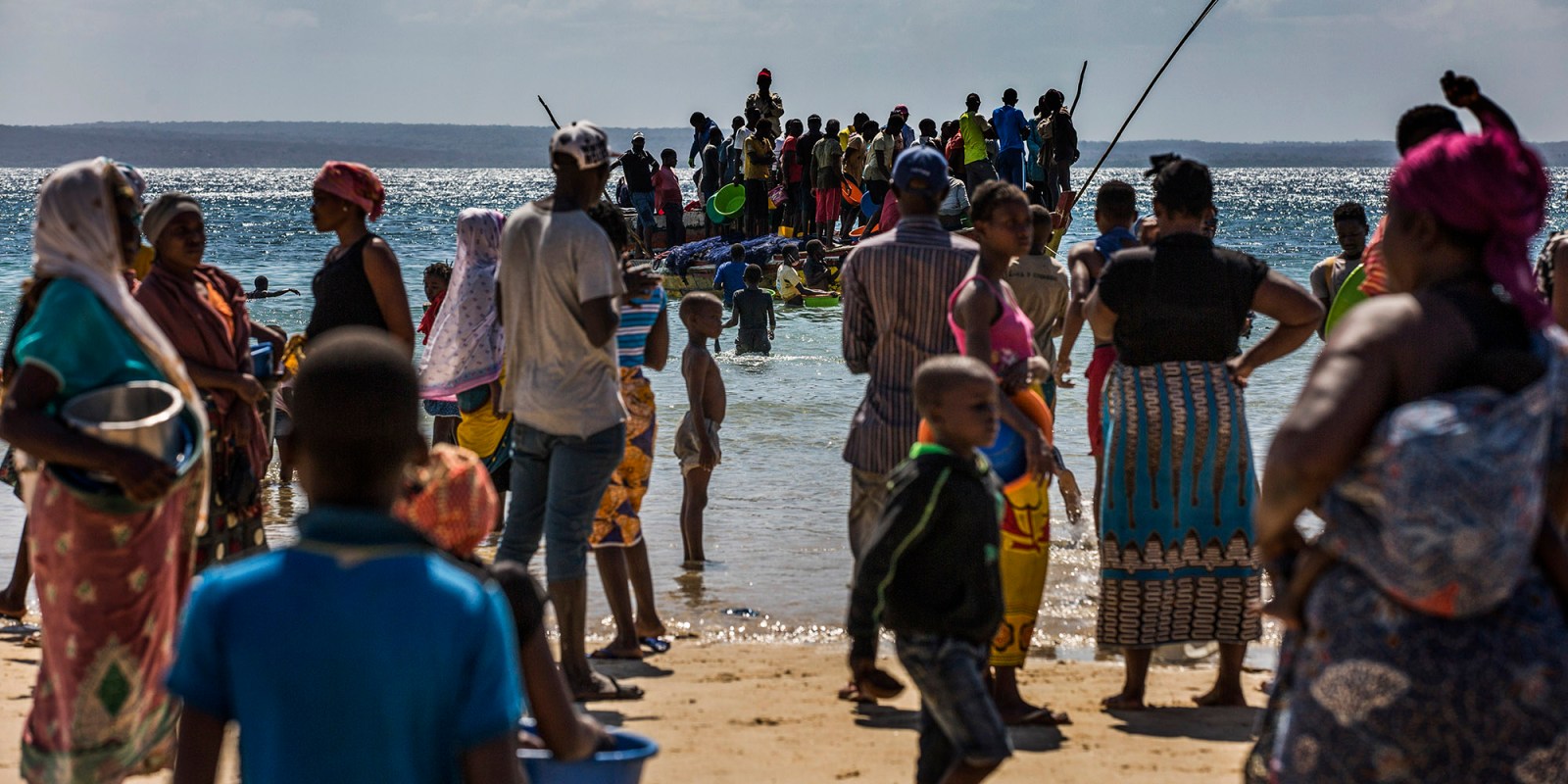 Passengers and cargo board a boat from a fishermen's beach that has become one of the main arrival points for displaced people fleeing from armed violence raging in the province of Cabo Delgado, in the Paquitequete district of Pemba, northern Mozambique, 21 July 2020. (Photo: EPA-EFE / Ricardo Franco)

While one Mozambican tragedy — an insurgency against poverty that has opportunistically taken on the mantle of Islamic State — faces the opposition of SADC troops, another tragedy — the theft of billions of dollars from a desperately poor country — is being settled in courtrooms and backrooms.

Vijay Prashad is an Indian historian, editor and journalist. He is a writing fellow and chief correspondent at Globetrotter. He is the director of Tricontinental: Institute for Social Research. He is a senior non-resident fellow at Chongyang Institute for Financial Studies, Renmin University of China. He has written more than 20 books, including The Darker Nations and The Poorer Nations. His latest book is Washington Bullets, with an introduction by Evo Morales Ayma.

On February 18, 2010, Anadarko Moçambique — a subsidiary of Anadarko Petroleum (bought by Occidental Petroleum in 2019) — discovered a massive natural gas field in the Rovuma Basin off the coast of northern Mozambique. Over the next few years, some of the world’s largest energy corporations flocked to Cabo Delgado province, where the basin is located. These included corporations like France’s TotalEnergies SE (which bought Anadarko’s project), the United States’ ExxonMobil, and Italy’s ENI, which collaborated with the China National Petroleum Corporation for “oil and gas exploration and production”.

These massive liquefied natural gas (LNG) projects by these corporations hold a potential value of $120-billion, according to Standard Bank Mozambique, with TotalEnergies SE and ExxonMobil in control of the most lucrative concessions. This valuation came at the same time as Mozambique held a rank of 145 out of 155 countries in the Gender-related Development Index, according to the Human Development Report 2009, and ranked 172 out of 182 countries, according to the Human Development Index. The immense find of the natural gas field and these LNG projects were poised to benefit an impoverished Mozambique economically and socially.

In 2014, then Mozambican finance minister Manuel Chang said that the revenue earned from this massive natural gas find would allow Mozambique’s government to “invest in energy, tourism and infrastructure. The Nacala, Beira and Maputo corridors, which will foster stronger regional communication links, are being developed to provide unique opportunities. Agriculture is at the base of our development, and fisheries are also very important, as we have a 2,700-kilometre-long coastline.”

Chang said that he was aware of the dangers posed by a massive revenue influx resulting from a discovery such as this (a problem called the Dutch disease). “We are going to use the income from mineral resources to diversify and reduce inequality,” he said. “We are investing heavily in education and health, because we understand that without a skilled and healthy population, there can be no growth.”

On the face of it, Mozambique seemed fated for a bright future. The natural gas find would help generate money for its government whose officials seemed smart enough to avoid the pitfalls of the resource curse. But everything went wrong soon afterwards. Two tragedies befell Mozambique. An insurgency swept through northern Mozambique, the very region of the natural gas bonanza, and a corruption scandal paralysed the government, with Chang being arrested in South Africa in 2018.

In 2017, armed militants took charge of large sections of Mozambique’s Cabo Delgado province. They operated under the banner of al-Shabaab (the youth). These young men, who formed part of al-Shabaab, hailed from Cabo Delgado, Nampula and Niassa; each of these provinces saw poverty rates rise in the aftermath of the natural gas find (the poverty rate doubled in Niassa between 2008 and 2014).

Meanwhile, the state has operated against the poor population from these provinces with extreme force. For example, in 2014 Mozambique’s Rapid Intervention Unit (Força de Intervenção Rápida) used violence against desperate people trying to make a living in the ruby fields of Cabo Delgado’s second-largest town, Montepuez.

Bonomade Machude Omar, who is the leader of al-Shabaab, was born in Palma, raised in the government and Islamic schools of Mocímboa da Praia, and trained in Mozambique’s military forces before he gathered several youths to support him against the extreme poverty being witnessed in Mozambique’s northern provinces. Omar first led this insurgency against poverty in the natural-gas-rich provinces of Mozambique under the flag of al-Shabaab and then later — opportunistically — under the flag of Islamic State.

For that reason, the US State Department has designated him as a terrorist, and the militaries of Rwanda and the Southern African Development Community (SADC), which includes troops from Botswana, Lesotho, South Africa, Angola and Tanzania, are now operating alongside the army of Mozambique in Cabo Delgado. They are doing the dirty work for ExxonMobil and TotalEnergies SE.

Meanwhile, a trial has begun in a courtroom in Mozambique’s capital, Maputo, where 19 men have been “accused of blackmail, forgery, embezzlement and money laundering”. They have been charged with a $2-billion “hidden debt” corruption scandal. In 2013-14, these men formed three companies to take advantage of the natural gas discovery. ProIndicus was set up in January 2013 to provide security to the multinational energy firms; Ematum, formed in August 2013, was set up under the pretext of being a tuna fishing company, which would carry out fishing off the northern coastline; and Mam, set up in May 2014, was to provide shipyard services for the multinational energy firms.

Each of these companies was co-owned by the Mozambique intelligence service known as Serviço de Informações e Segurança do Estado (SISE). None of these existed beyond the paperwork; the chief executive officer of all three firms was António Carlos do Rosário, a senior SISE official.

Most of the available evidence for the case comes from indictments in the US District Court in New York since New York banks offered their services for the bribes that anchored the deals. The three paper companies — controlled by senior officials of Mozambique’s government — took $2-billion worth of loans from Credit Suisse and VTB Capital (called Investment Bank 1 and 2 in the indictments).

The loans, 13% of Mozambique’s GDP, were zipped around by consultancies (Palomar) and holding companies (Privinvest) and involved people from a wide range of nationalities (Mozambique, United Arab Emirates, Lebanon, New Zealand, United Kingdom and Bulgaria) who were implicated in the “hidden debt” scandal.

The International Monetary Fund (IMF) suspended loans to Mozambique in April 2016, just after news broke of the hidden debt scandal. Mozambique’s economy contracted as international donors joined the IMF to cut off infusions of capital, leading to the metical, Mozambique’s currency, tanking by a third of its value.

In 2019, Mozambique struggled to renegotiate its debt, fighting to prevent the seizure of future revenues from the gas fields by the wealthy bondholders.

There are no armies rushing to deal with this scandal as Manuel Chang sits in South Africa fighting extradition to the United States, as António Carlos do Rosário, Gregorio Leao, and Cipriano Sisinio Mutota — all former SISE officials — sit in a courtroom in Maputo. With them in the dock is Ndambi Guebuza, the son of the former Mozambican president Armando Guebuza. It is unlikely that they will implicate the system.

For instance, former president Armando Guebuza is not facing any charges, and neither is his defence minister nor the current president, Filipe Nyusi. Nor is one of France’s richest men, Iskandar Safa, who is suing Mozambique for his money after his associate, Jean Boustani, was acquitted by a US court over jurisdiction qualms. And nor are the banks, Credit Suisse or VTB Capital, being prosecuted in court.

One tragedy — an insurgency against poverty that has opportunistically taken on the mantle of Islamic State — faces the full wrath of African armies. Meanwhile, another tragedy — the criminal theft of billions of dollars from a poor country — is being settled in courtrooms and backrooms. Omar is the villain of the day, while Chang, Carlos do Rosário and their associates will face harassment and short jail terms.

The real crooks, meanwhile, will take their seats at Dubai’s Cavalli Club and enjoy their $700 Wagyu grade 9+ steaks, smiling and plotting their next deals. DM

This article was produced by Globetrotter.