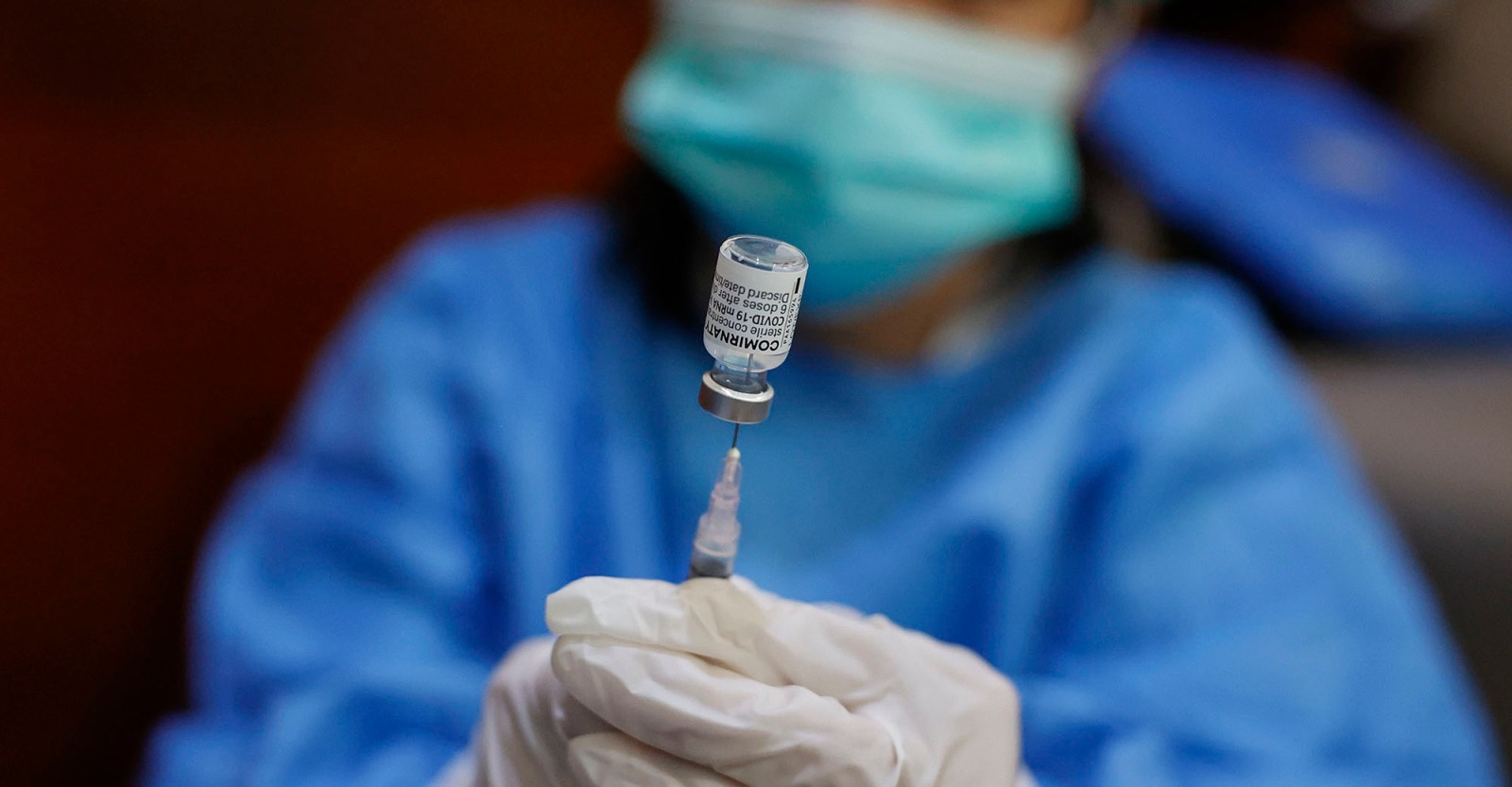 A healthcare worker prepares a dose of the Pfizer-BioNTech Covid-19 vaccine during a vaccination drive in Depok, Indonesia, on 1 September 2021. (Photo: EPA-EFE / MAST IRHAM) 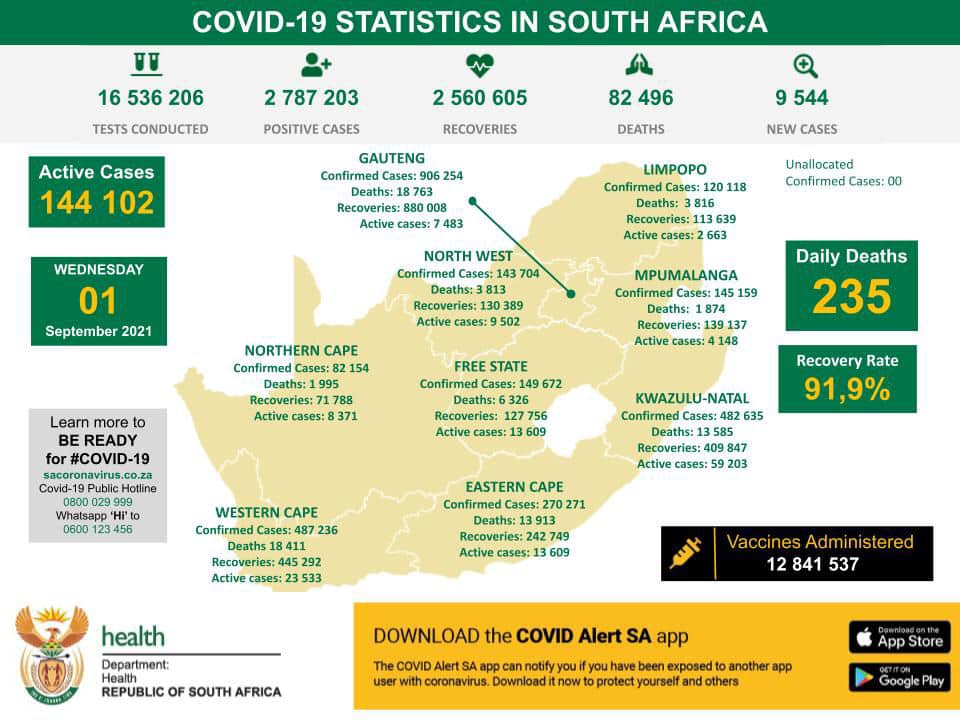 A majority of US employers are planning or considering requirements for a Covid shot by year-end. Pfizer dosed the first participant in a late-stage trial of its experimental oral antiviral treatment. Hospitalisations in the US are falling for the first time since June.

The World Health Organization opened a new hub for pandemic and epidemic intelligence in Berlin. South Africa may limit the use of public amenities to people who have been vaccinated. And Denmark will start offering the Johnson & Johnson shot to seafarers docking in the country.

Businesses around the world are signalling that innovative new communications tools are making many pre-pandemic-era trips history. A Bloomberg survey of 45 large companies in the US, Europe and Asia shows that 84% plan to spend less on travel.

Apple is asking all US employees to report their vaccination status, marking the latest move in a Covid-19 campaign that has stopped short of mandating shots.

The iPhone maker has asked the employees to report their status “voluntarily” by mid-September, regardless of whether they are working remotely or from an office. The company said it’s using the data to inform its Covid-19 response efforts and protocols. Apple previously asked employees in California, Washington and New Jersey for this information to comply with local regulations.

US hospital admission falls for first time since June

Hospital admissions of Covid-19 patients in the US are declining for the first time since late June, a sign that the latest surge may have peaked – at least for now.

The seven-day average of new daily admissions with confirmed Covid fell by 2.4% from a week earlier to 12,280, the first such drop since June 27, according to the US Department of Health and Human Services.

Scotland to use vaccine certificates

Vaccine passports will be needed for admission into nightclubs and large events in Scotland starting later this month after the country emerged again as Europe’s coronavirus hotspot.

The plans will apply to indoor and outdoor events and will need the approval of lawmakers in the Edinburgh legislature next week, First Minister Nicola Sturgeon said on Wednesday. Scotland is responsible for its own health policy and has diverged from the UK in some of its handling of Covid.

Pfizer dosed the first participant in a late-stage trial of its experimental oral antiviral in adults who are at low risk of developing severe Covid.

The study will evaluate 1,140 participants getting the experimental protease inhibitor and the HIV medicine ritonavir. Half will receive a placebo, and the remainder will get the drug combination twice a day for five days from the confines of their home or a non-hospital facility.

The New York-based drugmaker is running a parallel study in adults who are at high risk of developing severe disease. Results could be available this fall.

The World Health Organization opened a new hub for pandemic and epidemic intelligence in Berlin, saying the centre will help give countries the fast analysis they need to respond more quickly to public-health emergencies.

The German government is providing $100-million in initial funding for the project, which will seek to combine case and lab data with other information sources, including economic factors, cultural beliefs and human-animal interactions.

Moderna and its Japanese distributor Takeda said two deaths in recently-vaccinated men were not related to the biotech’s shot and are considered coincidental. A formal investigation is still needed to confirm the analysis, Takeda said in a statement.

With the infection rate stabilising, even at a high level, the government postponed a decision to require proof of vaccination, recovery from Covid or a negative test to enter restaurants and fitness centers. Hospital intensive-care units have come under pressure in recent days, and just 52% of the Swiss are fully vaccinated.

Denmark will start offering the Johnson & Johnson vaccine to seafarers docking in the country, regardless of nationality, for a fee. The industry lobbied the government for the programme, citing the challenges seafarers face getting a shot and the large numbers who haven’t been vaccinated. About 3,000 are expected to get the single-dose vaccine in the second half.

More than 70% of Italians are fully vaccinated, Health Minister Roberto Speranza said on Wednesday. Speranza thanked health personnel and volunteers who, all through the summer, tackled “one of the biggest challenges that our country ever faced”. Spain will reach that goal this week, according to Prime Minister Pedro Sanchez.

US employers mull over vaccine requirements

Vaccine mandates are set to become more common in the workplace.

A majority of US employers – 52% – are planning or considering requirements for a Covid shot by the end of the year, according to a survey released by consultant Willis Towers Watson. That’s more than double the 21% of companies polled that currently have some form of mandate.

The options vary, ranging from a strict order for all employees to limiting access to certain areas to inoculated workers.

Most in England have Covid antibodies

More than 94% of people in England had coronavirus antibodies in the week of August 9, according to the Office for National Statistics.

South Africa may limit the use of public amenities to the people who have been vaccinated, the country’s health minister said.

“Once there is sufficient coverage we should be able to arrive at the stage where we can actually make demands even at public amenities,” Joe Phaahla, the minister, said in the National Council of Provinces. “You can’t have your cake and eat it. You have the right to not have a vaccination, but you have no right to endanger the lives of other people.”

Europe’s top soccer clubs spent less during the summer transfer window as the pandemic continued to hit their finances, even as the sport’s two most prominent players switched teams.

The English Premier League, the continent’s richest competition, paid out a gross £1.1-billion in the trading period that closed on August 31, according to Deloitte’s Sports Business Group. That was the lowest since 2015. The German Bundesliga was the only league among the top five to increase spending.

“If some individuals refuse to take the vaccine, hence endangering those who have or those who could not due to medical exemptions, then we have to apply the basic rule of law, which stipulates that your human right stops where mine begins,” the paper quoted the director, Faisal Shuaib, as saying.

Two southern Nigerian state governments instructed their populations to get inoculated or be banned from religious services and public places.

The government is also evaluating making use of the “green pass” compulsory among workers in the public sector, according to Sole24Ore daily.

As of September 1, Italy requires travellers on planes, ferries, and long-distance trains and coaches to show proof of vaccination or of a recent negative Covid test. Anti-vaccine activists are organising protests to block the country’s main railway stations.

The Taiwanese government plans to tighten quarantine and testing rules for air crew from September 15 in an effort to prevent spread of the Delta variant, according to a statement from the country’s Centers for Disease Control.

Australia’s Covid-Zero policy is under renewed pressure after a second state indicated it was abandoning attempts to eliminate the highly-contagious Delta variant.

Melbourne set a 70% first-dose vaccination rate target to begin easing its restrictions – some of the toughest in the world – as Victorian Premier Daniel Andrews laid out a roadmap to reopening the state. Regional areas of Victoria could exit the lockdown as early as next week, he added. DM