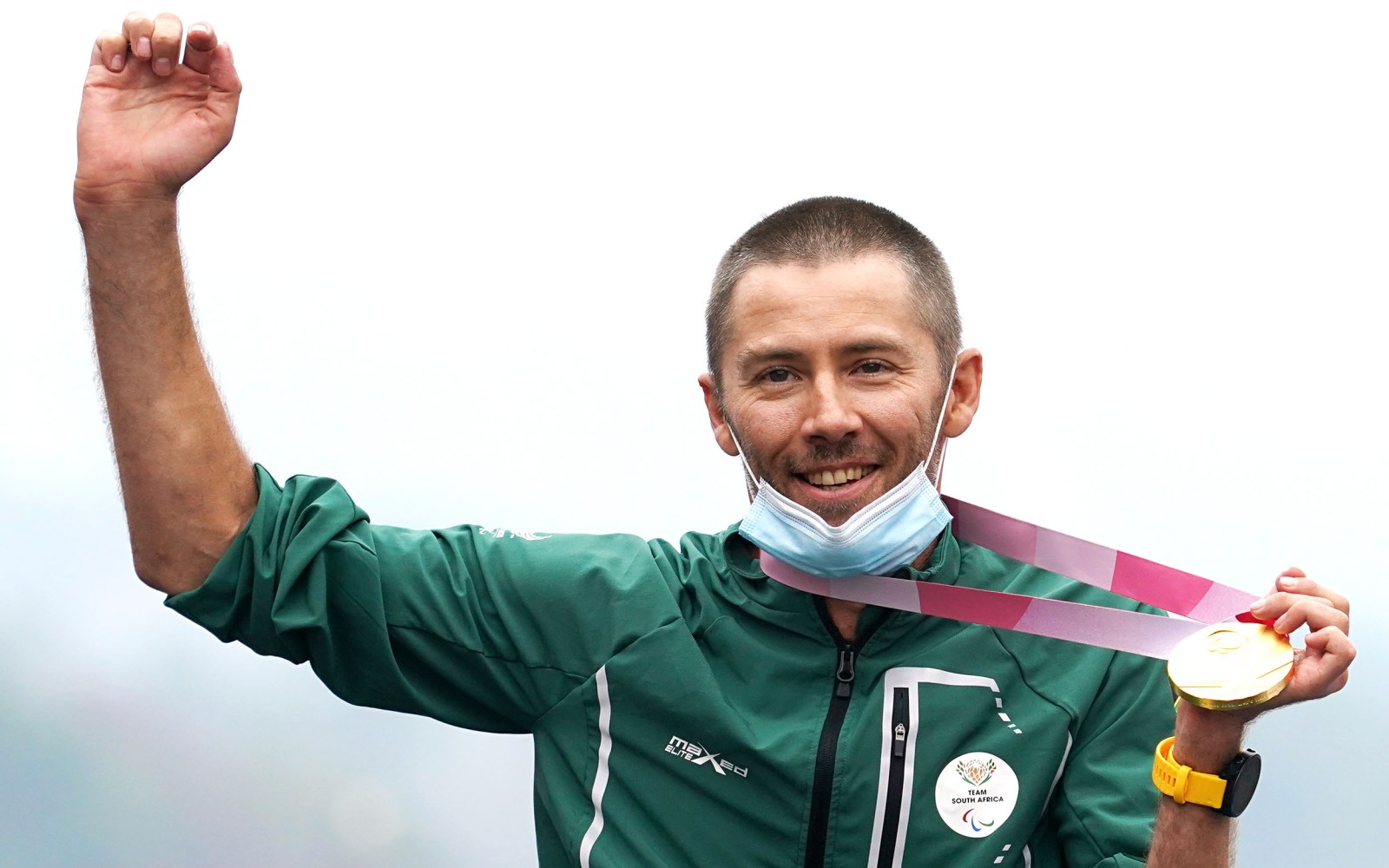 Pieter du Preez picked up Team SA’s third gold medal at the Tokyo 2020 Paralympics with victory in the paracycling H1 time trial on the famed Fuji Speedway circuit on Tuesday.

Pieter du Preez has overcome so much in his life that he wasn’t going to be thrown off track for Tokyo Paralympic gold by another competitor swerving in front of him, almost resulting in a race-ruining, or worse, accident.

As Du Preez thundered down the main straight at the Fuji Speedway circuit, and across the finish line to complete the first of two 8km loops, a paracyclist, finishing a different classification race, swerved in front of him to exit the track on the right.

“I saw him so late, I swerved and tipped onto two wheels, otherwise I would have hit him properly. My arm touched his wheel… that’s how close it was. I was flying.”

The South African was speaking in the immediate aftermath of winning gold in the men’s H1 time trial at the famous track, nearly two hours outside Tokyo.

The three paracyclists at these Games – Du Preez, Ernst van Dyk and Toni Mould – have been staying nearby for the week they’ve been in Japan. So, Du Preez knows his way around the circuit. But it was still frighteningly close.

It’s known in motorsport as a fast track, and hosted the Japanese Grand Prix until 2009. It also has one of the longest straights in motorsport (1.475km) and has had its fair share of drama over the years. Thankfully, Du Preez avoided becoming a statistic.

However, disaster averted, Du Preez continued on his dominant way to the gold medal. He had assumed control of the event from the start and by the time he raced past the pits and under the big timing board after the first of the two laps, he had opened up a 27-second lead on his closest challenger, Fabrizio Cornegliani of Italy.

The next time Du Preez went under the home-straight timing board it was 8km later, and thankfully it was less dramatic and far more joyous.

Bronze medallist Maxime Hordies was 3:11.82 behind.

Du Preez therefore made it three gold medals for Team SA at these Paralympics, while upping the country’s tally to four overall, including Louzanne Coetzee’s silver in the 1,500m on Monday.

Du Preez has had a meteoric para-career, but Paralympic gold was the one missing medal on his ever-growing, glittering CV.

“I can’t explain it… it’s very special,” he said as he was mobbed, still in his racing set-up, by well-wishers. “I was in tears after I crossed the line, but tonight I think I’m going to have an even bigger cry in my bed.

“It’s hard to explain the journey here. As a six-year-old I was dreaming about winning gold at the Olympics. Obviously, I hadn’t thought I’d be competing in the Paralympics! Then in 2003 while I was out cycling I broke my neck in an accident. There have been so many tough times and fights to get here that it’s difficult to explain.

“There really is something special about 2021, though, and I have now won both the world championship title and Paralympic gold this year. The Paralympics should have been held last year, but it [2020] wasn’t a good one for me.

“I fetched my son from his preschool and fell badly… I completely dislocated my AC joint, snapped my coracoid process off my scapula and had a plate in there for six months. I couldn’t train properly,” the 41-year-old said.

“I have got so many people to thank, but my helper and friend Walter Lutch has played such a big role. Because of Covid-19 my son and my wife couldn’t come with me to Tokyo.

“They’ve been on every trip with me since 2016, so that part was hard. My son has also been born through this five-year journey, so it’s been a very special time.”

Du Preez had oozed confidence coming into the event, and although he competes in the road race on Wednesday, the time trial is the one in which he’d stacked the cards.

“To blast my competitors the way I did today is nothing short of a miracle,” he said. “I did this for all the real H1s and hopefully we will get more events for us in the Paris 2024 Paralympics.

“This medal is for everyone out there… the support I’ve had is incredible. There’s been tough times and apart from everyone in my team – they know who they are – this gold shows that we can all make a difference to South Africa, one person at a time. As one, and as all, we can make South Africa stand up as a great country.”

An hour after he had freshened up for what was an emotional medal ceremony, he admitted: “It still hasn’t sunk in.”

But it will, and the remarkable story of Nicholas Pieter du Preez is only gaining momentum.

Earlier, para great Ernst van Dyk finished ninth in the men’s H5 time-trial final, but he was reserving his energy for Wednesday’s road race. This was no secret and as Van Dyk said: “The time trial and the road race used to have a day’s rest between. That’s no longer the case and the body doesn’t recover as fast as it used to!

“But this was a good warm-up and it settled the nerves for tomorrow. After one-and-a-half laps I knew I had no chance of a medal, so I used the race to go through the motions and settle into things.

“The road race is going to be really hard. We have more climbing to do than the Argus but over a 80km distance, so it’s going to be hell. This is a fantastic venue, but the course is challenging and hard. Tomorrow when it gets hot and the climbing gets tough, we’ll know where we are,” Van Dyk said. DM