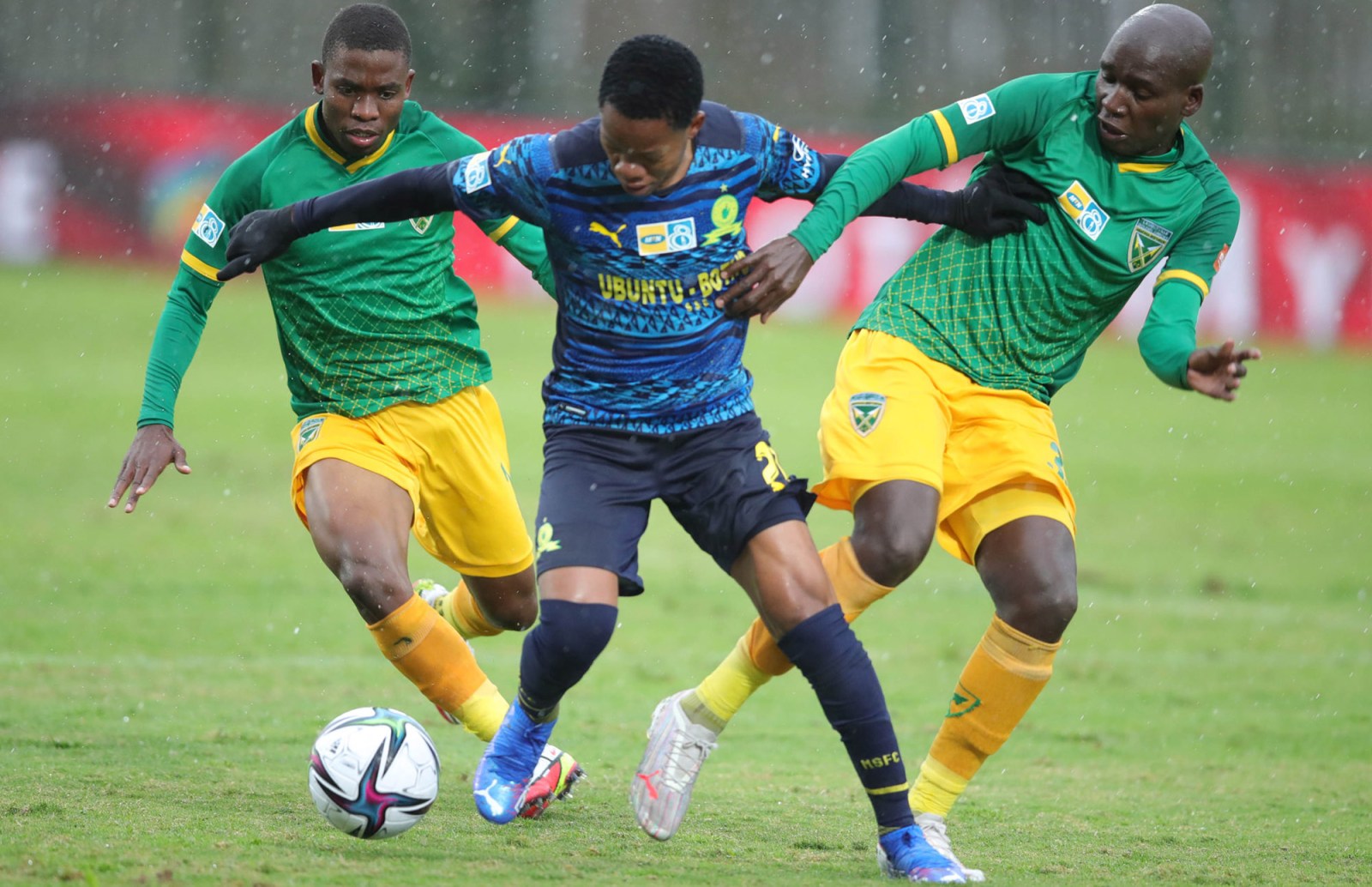 The four semifinalists of the MTN8 could not be separated, with each of the last-four clashes ending in stalemates. Mamelodi Sundowns came from behind to level matters at 1-1 versus Golden Arrows while Cape Town City and Swallows could not find a path past each other with their game ending on 0-0.

Both semifinals of the MTN8 ended in draws and there is still much to play for when the return legs come into focus in a month.

Mamelodi Sundowns will fancy their chances of getting the job done on home soil after a 1-1 draw against Golden Arrows in their semifinal first leg match at Sugar Ray Xulu Stadium in Durban.

The rain poured down, but the same could not be said for goals in the tough conditions, made even more unbearable by the wind for teams who rely on intricate passing.

A first goal for Sundowns’ new Slovak striker Pavol Safranko levelled matters in the downpour deep into the second half after midfielder Nqobeko Dlamini had given the hosts an early advantage before they decided to sit back and protect their lead.

“A spirited comeback. A spirited fight. Good demonstration of the mentality that we possess in the team,” said Sundowns co-coach Rulani Mokwena after the game.

“Of course, it was not easy to start the match and immediately be on the back foot. Particularly when we know the challenge that lies ahead of us in relation to being the team with a target on its back. Already this season, in four matches — all four matches, in certain moments had teams that reinforced their defensive block and sat in around their defensive third, looking to play on the counterattack.”

Arrows coach Lehlohonolo Seema praised his players for a resilient performance, despite conceding an away goal.

“What can I say? These guys left everything on the field of play today,” the Abafaná Bes’thende mentor told Supersport TV.

“We came up against a very good team. Well-structured team. Today they opted for something else. We tried to deny them space in the middle. They couldn’t cope. They tried to press us high. We managed to come out and resist the pressing.

“After they conceded the goal, they decided to go out wide. We were under siege for the whole of the second half. I can tell you that in the first half we had one good chance to make it 2-0. Had we gone 2-0 up it was going to be a different story.”

Despite that regret over missed opportunities, Seema’s men will head to the return leg in Tshwane brimming with confidence, having contained the attacking force that is Masandawana over the 90 minutes of the first match.

Honours even in Cape Town

Cape Town City will be slightly happier than their opponents after their semifinal first leg with Swallows ended in a nil-all draw at the Athlone Stadium.

Swallows will be keen to sharpen their shooting ability before the return leg. This was their second 0-0 in two games.

“We can’t create this number of opportunities and not convert them. Clean sheet after clean sheet. I think the only goal [we’ve conceded this season] was a penalty against Orlando Pirates,” said Swallows coach Brandon Truter after the game.

“It’s four games without conceding now. The offensive players need to come to the fore and they need to show it. There is no use keeping the opponents out and then we don’t score.”

City controlled much of the game in terms of possession, with Swallows reduced to rare counter-attacks in terms of threat. The Citizens’ coach, Eric Tinkler, also bemoaned the lack of clinical finishing upfront from his side.

“We know they are a team that tries to play from the back and we tried to press them and made it difficult for them to play their usual game from the back and we created chances. Every time we won the ball, we created chances. But you have to put the ball in the back of the net because if you do not do that, you are putting yourself under pressure on the counter,” Tinkler commented. DM