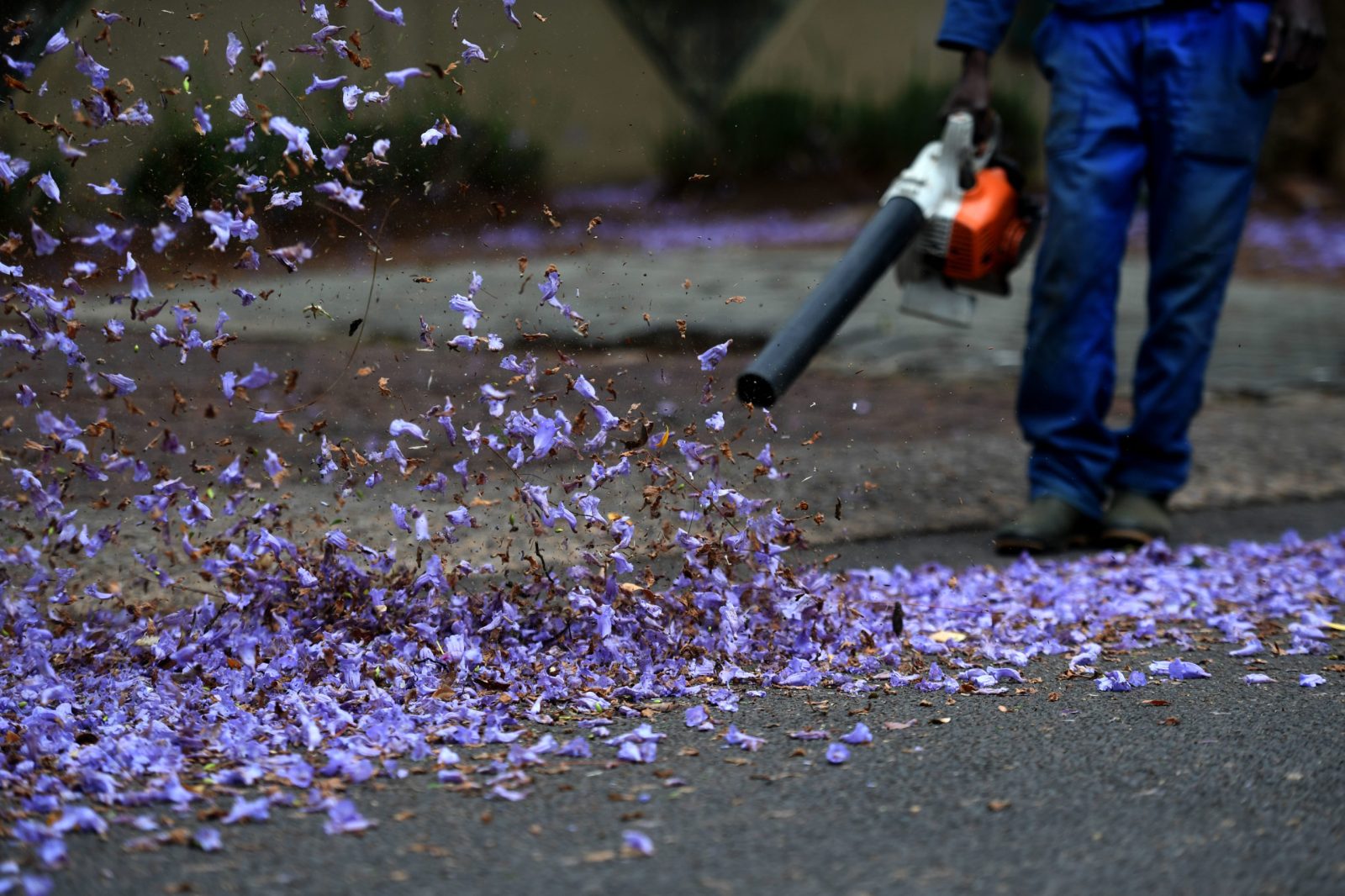 20201012 NETWERK24 A gardener blows away Jacaranda flowers that have fallen on the pavement. Image: Deaan Vivier.

The informal sector makes significant contributions to the national economies of most global South countries. In South Africa it constitutes 15% to 30% of all employment.

The informal sector refers to small or unregistered production activities. Informal employment means the hiring of workers in a casual and unregistered way without regard for labour legislation and rights.

It is estimated that there are over 1 million domestic household workers in South Africa, representing as much as 20% of employed African women. This makes domestic employment one of the largest employment sectors in the country.

Another subgroup within the informal employment sector is household gardeners, about whom very little research has been done. This neglect led us to examine the sector in 12 towns and cities of varying size in the Eastern Cape, one of South Africa’s largest and poorest provinces.

We set out to determine the numbers of informally employed gardeners, the wage levels and the overall economic value of the sector. We found that nationally there are just under 1 million informally employed gardeners, that individually most are paid at or below the minimum wage, but the sector as a whole sees annual wage transfers of between R10 billion (US$675 million) and R13.5 billion ($911.5 million).

The number of gardeners and wage levels

Our primary focus was to determine the number of informally employed gardeners in each of the towns, who they were and the wages paid to them. Then we aggregated that up to calculate the value of the sector.

Most of the gardeners were employed by one or more households for two or three days a week. About 60% of the gardeners worked for a single employer and had no other work. Most (70%) valued their current position, and appreciated that it had improved their wellbeing.

However, the majority also lamented that the wage rates were insufficient to satisfactorily meet several basic needs such as food, education and transport costs.

Nearly all (98%) of the gardeners were male, middle-aged (an average of 46 years old) and with limited formal education (an average of 5.8 years of schooling). One-third had never previously held any long-term employment. The mean length of employment as a gardener was 6.5 years, ranging between a few months to 26 years.

The most common means of finding a gardening job was through directly approaching a homeowner and offering one’s services (39%), or through the recommendations of existing or previous employers to other households (32%).

Scaling up the numbers from our research we estimated that there were about 965,000 people employed as informal gardeners in the country. This is well above both the mining (384,000) and agricultural (810,000) sectors and similar to the transport sector (943,000) nationally.

If half of the informally employed gardeners work for more than one household then the national number is closer to 724,000. These numbers translate into an annual wage transfer of R10.1 billion ($682 million) to R13.5 billion ($911 million) nationally for the lower and higher estimated number of gardeners. This makes it abundantly clear that the gardening sector follows that of other informal sectors in contributing significantly to local employment, albeit at survivalist levels.

Scholars differentiate between two survivalist informal sector occupations. In one, participants just survive and have few skills or prospects to move beyond that. The other is made up of micro-enterprises, which have family or a few employees and have the potential to grow.

With most of the gardeners having low formal education, limited work experience outside the sector and being middle-aged, prospects for employment in the formal sector are limited for most. It is unlikely that many will be able to scale up to become independent contractors.

Yet, in the context of high unemployment nationally and low formal skills, most of them valued the gardening job that they held despite the low pay, an indicator of a poverty trap situation.

This requires appropriate policy and regulatory interventions to help move the sector beyond just a survivalist mode. A start would be measures to increase awareness among employing households of the need to pay gardeners at, or preferably above, the minimum wage (since 45% currently don’t), in line with regulations for the domestic worker sector.

A second intervention could be support for training and establishment as small contractors. DM/ML