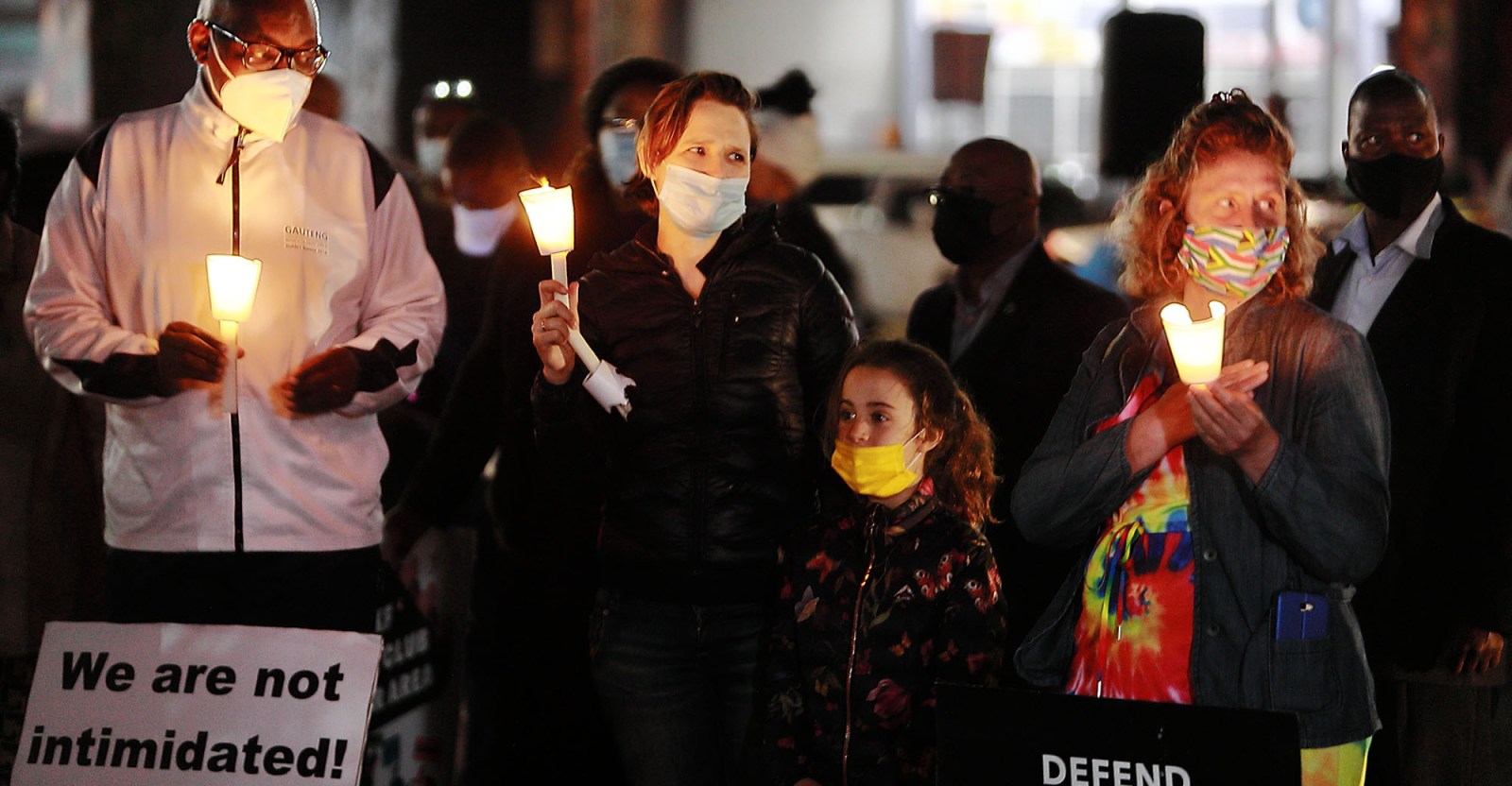 A candlelight vigil for corruption fighter Babita Deokaran at the office of the Gauteng premier on 26 August 2021 in Johannesburg, South Africa. (Photo: Gallo Images / Fani Mahuntsi)

Suspects will not be asked to enter a plea on Monday and the prosecution will ask for a seven-day remand to gather information for a bail hearing.

A day after the murder, employees from the GD0H visited Deokaran’s family and informed them that a senior official in the department had made threats to Deokaran.

Deokaran had been investigating personal protective equipment (PPE) tender corruption at the GDoH. The information she uncovered will be part of the evidence the State will use in the prosecution of the seven accused, who will not be asked to enter a plea on Monday. The prosecution will ask for a seven-day remand to gather information for a bail hearing.

The suspects, from KwaZulu-Natal, were arrested in the early hours of Friday at two properties in Rosettenville in Gauteng.

They face charges of murder and the illegal possession of unlicensed firearms and ammunition in connection with the murder of 53-year-old Deokaran on Monday, 23 August, outside her home in Winchester Hills, Johannesburg.

Deokaran had returned home at 8am after dropping her child at school when assailants in a BMW opened fire on her in her car. The single mother sustained multiple gunshot wounds and died in hospital.

The hitmen fled the scene and police traced their vehicle after a resident who took photos of the car handed these to investigators.

The car was spotted outside Deokaran’s home three days before her murder, and a person inside the car was photographing the property.

A month ago the suspects rented a house close to where Deokaran lived. Information is that the hitmen were paid an “exorbitant” amount to carry out the murder.

An intelligence officer in Gauteng, speaking on condition of anonymity, said: “Hits in Gauteng comprise a mastermind, a middleman and the hitmen. The middleman negotiates the price with the hitmen.

“The price also includes legal fees for the hitman in the event of being arrested. Part of this deal is for the hitman to take the fall and never stab the mastermind in the back.”

There has been a previous case of a murder committed by izinkabis (hitmen) from KZN.

In October 2018 advocate Pete Mihalik was gunned down outside a school in Cape Town while dropping off his children.

Three suspects, Sizwe Biyela, Nkosinathi Khumalo and Vuyile Maliti, were arrested. Evidence was that Biyela and Khumalo were from KZN and that they were hitmen for hire in the taxi industry.

Police Minister Bheki Cele, reacting to the arrests after Deokaran’s murder, said: “I’m told by the police that this is just the beginning. They are still going to go very far with the matter. Those arrested are regarded as hitmen, which means we have to find the bosses.” DM/MC