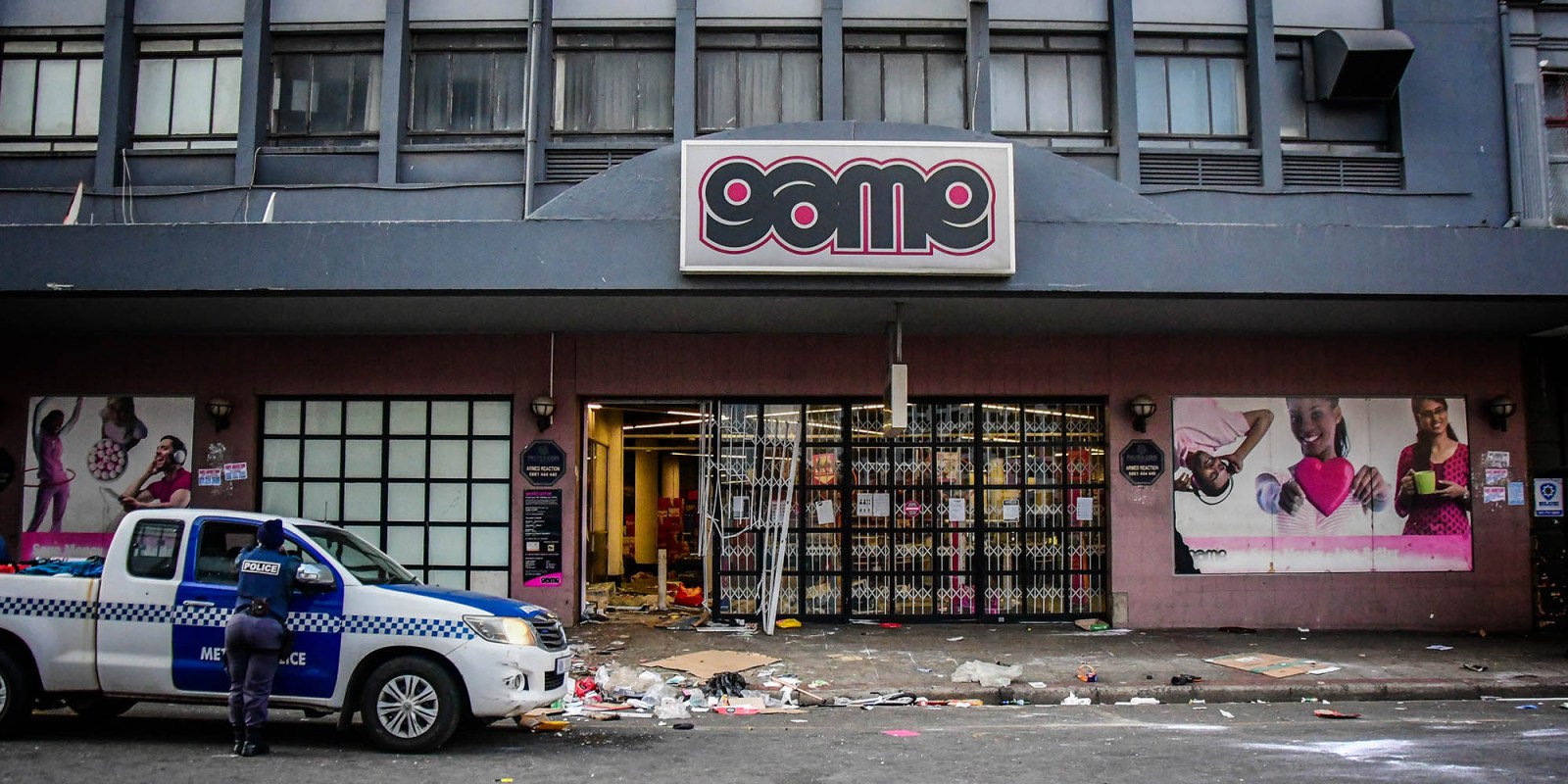 A police vehicle in front of a looted Game store in the Durban CBD on 12 July 2021. (Photo: Gallo Images / Darren Stewart)

Retail giant Massmart, after a string of cash-burning investments and the underwhelming performance of its Game outlets, compounded by the riots in July that saw more than 40 of its stores damaged and closed, has opted to pull out of west and east Africa, focus on building its online offerings, and says it won’t blink when it comes to ditching other struggling assets.

In half-year trading results published on Friday, Massmart said group sales for the 26 weeks up to end-June 2021 had risen 4.4% to R41.3-billion, compared with sales of R39.6-billion over the same period in 2020. Trading profit showed a 266.7% increase to R444.2-million. Overall, the group continued to bleed cash, with losses for the period of nearly R1.1-billion, against R1.2-billion negative cash flow in the preceding period. That led to headline losses per share of 298.8 cents.

“For too long we have been investing in the wrong types of assets in my opinion,” said Massmart chief executive Mitchell Slape in an interview with the Business Maverick.

“The divestiture of the businesses that are not core to us. The Cambridge Food, Rhino and Massfresh, things like that, frees up capital space for us so we can turn around and invest in the businesses we really believe are the future for Massmart.”

In that vein, last week Shoprite said it would buy Massmart’s lossmaking Rhino and Cambridge Food businesses for R1.36-billion. And earlier this week Massmart announced it would be shutting down 14 Game outlets in west and east Africa, in Nigeria, Ghana, Tanzania and Uganda. Massmart will use some of the proceeds to buy a controlling stake in grocery delivery app OneCart, part of its strategy to shore up its online shopping capabilities which have fallen behind rivals like Checkers and Takealot.

“We’ve created a lot of space with the portfolio actions we have taken. And we’ll continue to lean into funding from an opex, capex, and potentially M&A perspective as well,” said Slape.

Besides ditching its African operations and the fresh food portfolio, speculation that Massmart may sooner rather than later offload Game, has been swirling. Game, which sells everything from household appliances and furniture to groceries and stationery, has been a drag on the group’s profitability despite a long-running turnaround plan.

Massmart has a huge debt pile, with loan debt and money owed to creditors together at around R23-billion. Slape said the current level of debt was manageable, although the riots would see it delay payment of its R4-billion loan from its parent company, US behemoth Walmart.

Game recorded a 15.5% decrease in sales in 2020, and in the six months to June 2021 sales fell 8.7%. Massmart’s plan to reboot Game includes relaying the stores, exiting the food selling element and introducing apparel sales.

In a media call earlier, Slape said he was “optimistic” about turning Game around, but his patience was limited.

“Game is not a business that was broken overnight, and it’s going to take a little bit of time for us to get in the right spot,” Slape said. “There’s reason to be optimistic, there’s upside to the Game story. But my patience is not unlimited for Game, either. It needs to perform.” BM/DM