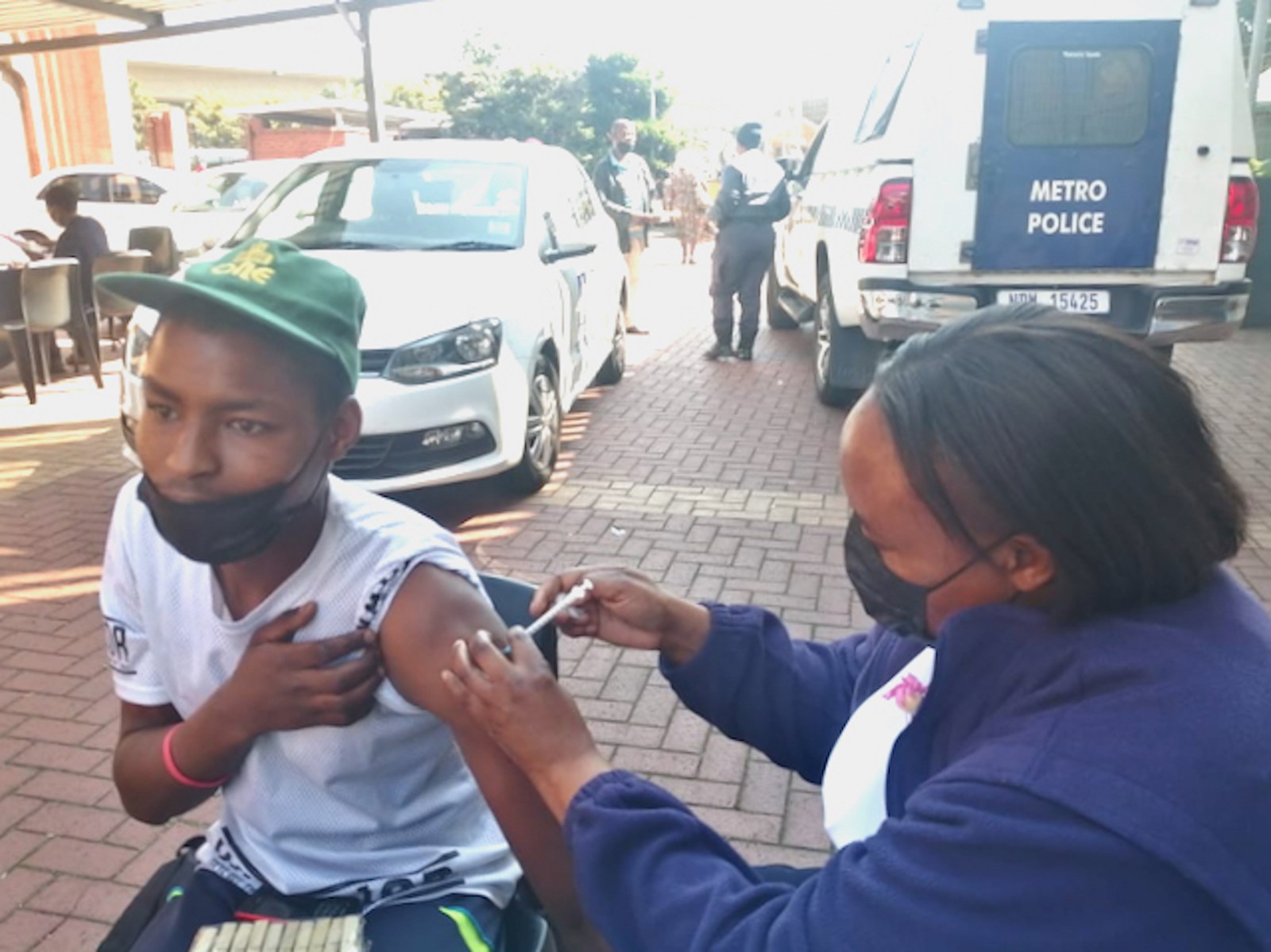 Sandile Mthembu was vaccinated against Covid-19 at the Denis Hurley Centre in Durban on Wednesday. “I decided to come to the place I am familiar with to take the vaccine because here there are people who are like me. I am glad that the City did not forget homeless people and brought the vaccine to them,” said Mthembu. (Photo: Nokulunga Majola)

More than 100 people, many of them homeless and living on the streets of Durban, were vaccinated against Covid-19 at the Denis Hurley Centre on Wednesday. The single-jab Jonhson & Johnson vaccine was used.

This formed part of the eThekwini Municipality’s interventions to reach people who otherwise might go unvaccinated.

However, identity documents are still being required, and many who came were told they cannot be vaccinated right now.

Vaccinating people who are homeless started on Monday at the Jewish Hall. Other vaccination sites were ​​the Strollers Building on Tuesday and Block AK on Stamford Hill Road on Thursday.

Several hundred people have been vaccinated, but Durban has thousands of homeless people. During Level 5 lockdown in 2020, more than 2,000 homeless people were taken in at shelters.

Shaylen Thaver (24), who lives on the streets of Umbilo, said he chose to get vaccinated because as someone with a substance habit, “I need all the help I can get for my body to fight against the virus”.

Also keen to be vaccinated was Sandile Mthembu from Ntuzuma. He is 23 and lives with his grandmother after living on the streets for years. He sells pegs, cockroach poison and other items on the street.

“I decided to come to the place I am familiar with [the Denis Hurley Centre] to take the vaccine because here there are people who are like me. I am glad that the City did not forget homeless people and brought the vaccine to them,” said Mthembu.

“Everything was quick and fast. The health workers were so friendly and they addressed all my questions and any concerns that I had,” he said.

Luckily for Mxolisi Mavimbela (24) he received his ID three months ago. “It couldn’t have come at a better time,” he said.

Like many of the people who arrived to be vaccinated, they had heard all kinds of false rumours and misinformation about the safety of vaccines.

“I heard so many rumours about the vaccine, but I trust the information that has been given to us here at the centre and that is why I decided to vaccinate,” said Mavimbela.

But many were disappointed that they could not get vaccinated because they did not have IDs. Thandazani Lukhozi, who lives on the street in North Beach, said he had tried to get the jab at the Jewish Hall on Monday “only to be told that only people with ID are vaccinated”.

“I have never had an ID before. Both my parents passed away when I was young and I was living with relatives, which is one of the reasons I left home. I want to get vaccinated but I don’t know what to do without an ID,” he said.

Nhlanhla Shozi said: “It is unfortunate that when it comes to something that can save our lives we are left behind just because we don’t have documentation. I applaud the government for providing this service free, but it must be provided to everyone who chooses to get vaccinated.”

“We are assuring people that it is safe to take the vaccine even if they are on drugs, have diabetes, TB, or on ARVs. We are giving people the right information.”

EThekwini Municipality spokesperson Msawakhe Mayisela said the response has been fairly good and with education more people are coming forward.

He said they will discuss with Home Affairs how to assist people without IDs. DM