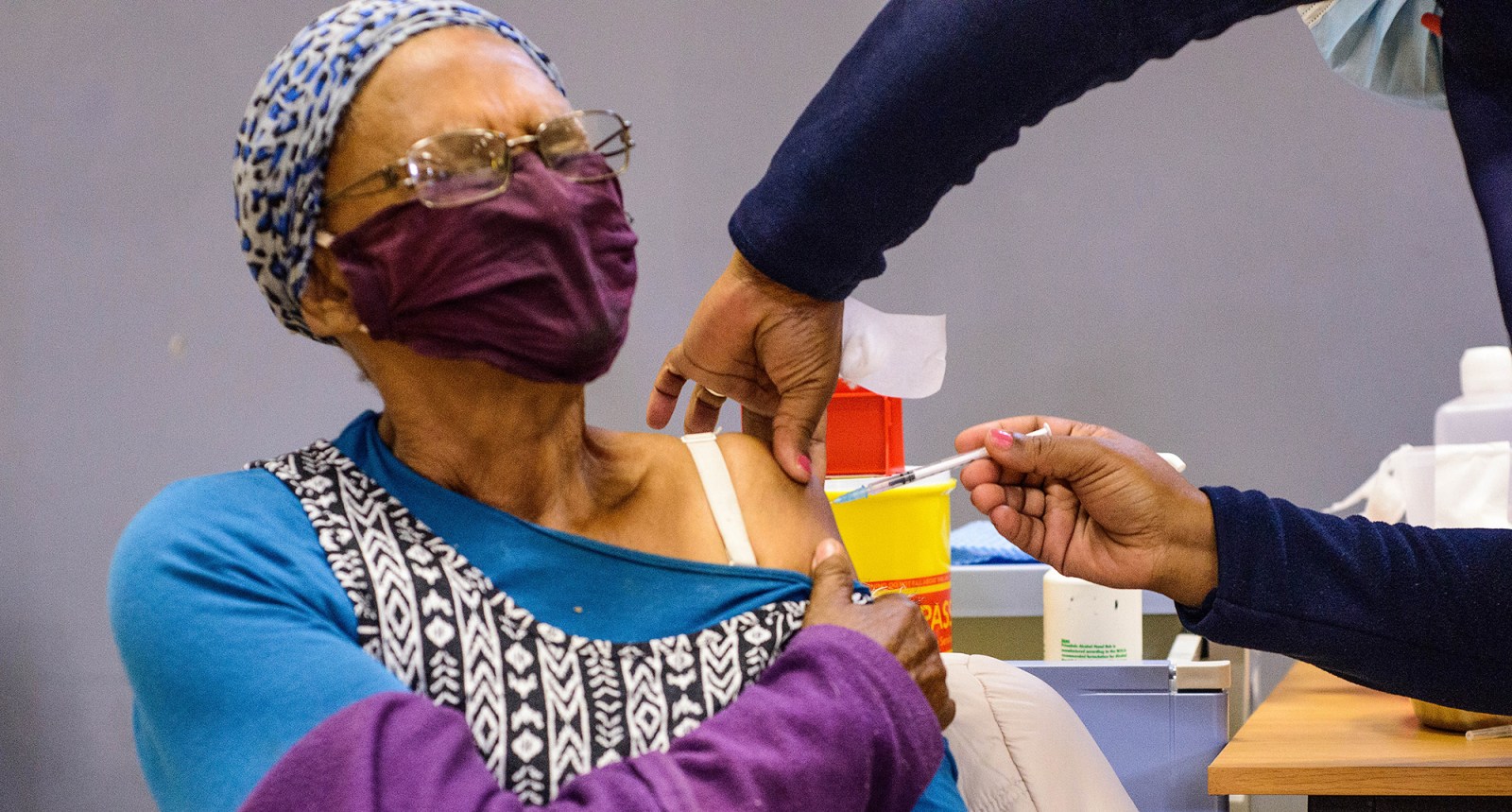 A woman is vaccinated at the Mbekweni Community Hall vaccination site in Paarl on 22 June 2021. (Photo: Gallo Images / ER Lombard)

Health Minister Joe Phaahla says that while he does not believe a general regulation forcing all adults to be vaccinated is on the cards, there are discussions that mandatory vaccinations might be needed for certain sectors.

This was announced by the Minister of Health Dr Joe Phaahla on Friday during the Department of Health’s weekly update on the Covid-19 situation in the country.

“We don’t foresee a regulation saying everybody must vaccinate, but what is possible and what I believe we will consider is that for certain service providers, areas of entertainment or workplaces, restaurants, cinemas, gyms and so on. It is a possibility.

“But not a regulation as part of disaster management to say vaccination is compulsory for every adult,” he said.

Phaahla said the third wave has become unpredictable in a “worrying way” as the initial steep downward trend of cases has been reversed, with numbers rising again from 13 August, nationally and provincially, particularly in the Western Cape, Northern Cape and the Free State.

However, it was encouraging that Gauteng, which had been the epicentre of the third wave, was showing a sustained and continuous downward trend.

Nationally there had been a drop of only 2.2% in new cases and in the past three days between 10,000 and 13,000 new infections had been confirmed,  which was “not very good progress”. The country’s positivity rate was still high at between 19% and 20%.

South Africa has now lost 80,826 people to complications of Covid-19 and on Thursday another 327 died.

Phaahla said they are worried about two provinces in particular: the Western Cape (27% positivity rate) and the Northern Cape (30%).

The Northern Cape’s numbers had remained consistently high over a long period.

Another worrying trend in the country was the number of young people testing positive for the virus.

“Some clusters are traced to schools, but social activities [also] had a role to play,” the minister said, explaining that some of the infections have been traced to parties held without the necessary Covid-19 precautions.

“What this means is that the third wave is dragging longer than the first and second wave. In the absence of new variants this means that people are not observing the necessary precautions.”

A fourth wave of infections, possibly driven by a new variant, is predicted for South Africa around November. But Phaahla said the way things are going it will hit at the end of the third wave. He worried that this meant health workers would not get any rest.

Across all age groups, about 240,000 people were vaccinated daily in South Africa and the country set a new record of 1.5 million vaccinations over seven days. Phaahla said weekend vaccinations are increasing and so far 8.841 million people have received at least one jab and 5.4 million are fully vaccinated.

He said he was also happy to announce that the ratio between men and women is narrowing, ascribing it to influences from young people.

At this stage their priority was getting as many adults vaccinated as possible before they discussed giving booster shots.

The manager of the vaccination programme, Dr Nicholas Crisp, a deputy director in the Health Department, said the AstraZeneca vaccine is registered for use in South Africa but availability is a challenge.

There was currently no stock available from the Serum Institute in India and if the country sourced the vaccine elsewhere a new certificate must be obtained from the South African Health Products Regulatory Authority.

Crisp said stock from the institute is likely to become available again from the end of October.

It was announced earlier in August that the country will start using the AstraZeneca vaccine, which was abandoned in January because of its low efficacy in preventing symptomatic disease from the Beta variant, but the shot has proven highly effective in preventing severe Covid-19 and death from the Delta variant. In January, data on severe disease and death were not available for the Beta variant in South Africa.

Crisp said they were also still engaging around the Sinovac vaccine and working to get the necessary information before negotiating price. DM/MC