Djokovic on brink of history at US Open, with big names absent 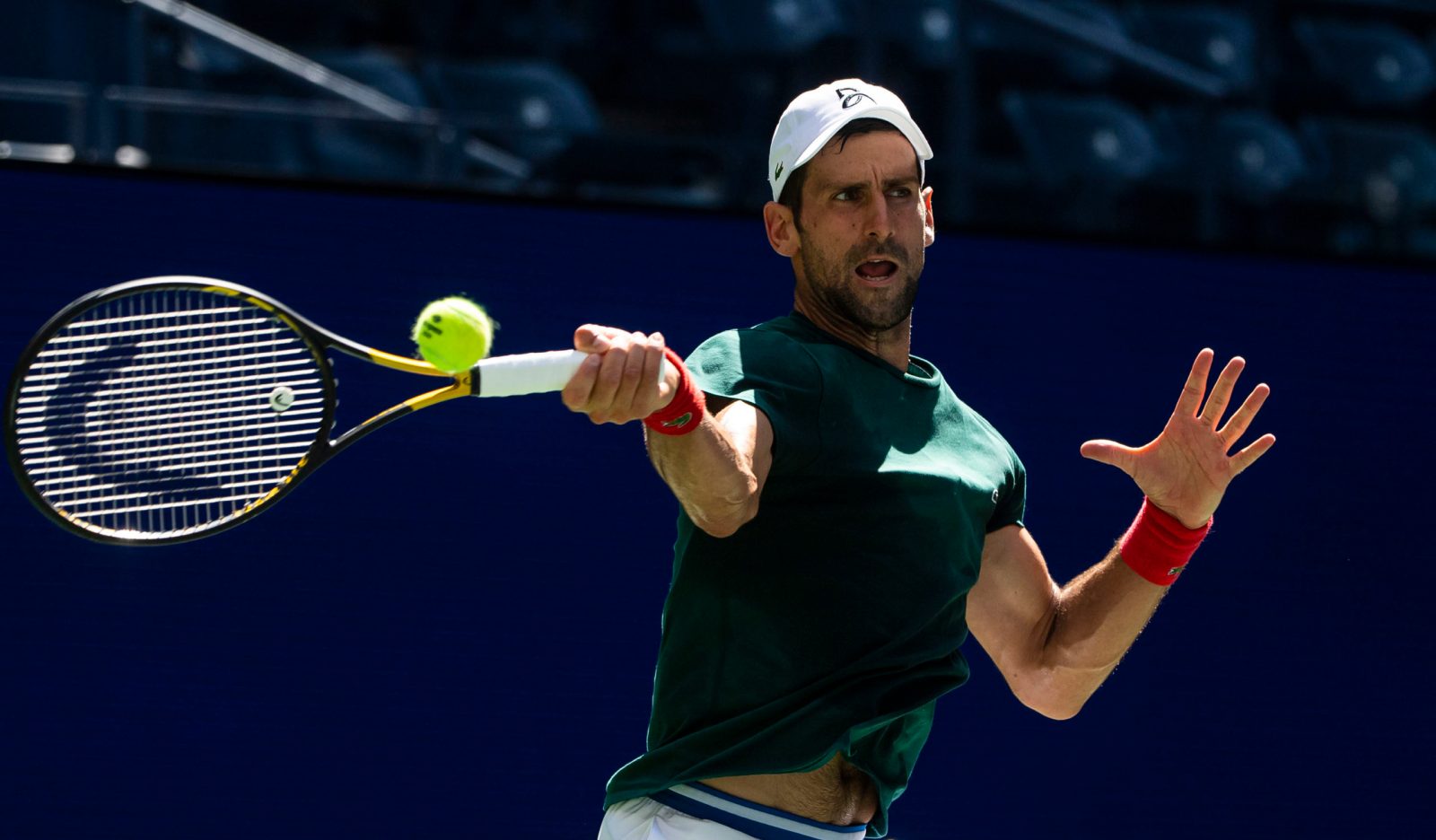 Novak Djokovic of Serbia practises with Casper Rudd of Norway before the start of the US Open at the USTA Billie Jean King National Tennis Center in New York City on 24 August 2021. (Photo by TPN/Getty Images)

World No 1 Novak Djokovic has the chance to become the first male player to complete a season Grand Slam since 1969. And his path is made slightly easier without Rafa Nadal and Roger Federer in the draw.

For the second year in succession, tennis’ fourth Grand Slam of the season, the US Open, will be played without Roger Federer and Rafa Nadal, while Serena Williams is the most high-profile absentee on the women’s side of the draw.

The absence of those three tennis legends, who have 63 Grand Slam singles titles between them, makes the path of any of their rivals that little bit easier.

Djokovic, the men’s world No 1 and winner of the first three Slams of the season at the Australian and French opens and Wimbledon, probably doesn’t see it that way.

For the past three years he has had the ageing Federer’s number and Djokovic also toppled Nadal on clay at Roland Garros earlier this year. Whether Nadal or Federer were in the field or not, Djokovic was always going to start as the overwhelming favourite.

His only blemish this year was defeat in the semifinals of the Olympic Games. That cost him the chance of achieving the “Golden Slam” – winning all four majors and the Olympic gold medal in the same season. Only German Steffi Graf managed that feat during her annus mirabilis in 1988.

Still, if Djokovic manages to win his 21st career major title at Flushing Meadows it would be a remarkable and rare achievement. Not only would he become the first man to win all four majors in the same season since Rod Laver in 1969, but he would become the solo leader of career Grand Slam titles in men’s tennis.

It’s a rare thing, achieved by some of the greatest players in history. Whether Djokovic achieves this rare feat or not, he will remain a great. But succeeding in completing the season Grand Slam might settle the subjective debate of who is the best between himself, Nadal and Federer.

But that’s not his immediate focus. His legacy is something Djokovic has admitted to thinking about, but over the next two weeks legacy will be secondary to winning seven matches to complete a large piece of history.

There will be fans back in New York after the 2020 tournament was played behind closed doors. That will add to the atmosphere but will also lend some drama because Djokovic was disqualified during the fourth round from the 2020 tournament when he hit a ball in anger and it struck a female line judge.

It was an offence that came with instant disqualification and in Djokovic’s absence, Austrian Dominic Thiem overcame German Alexander Zverev for his first Grand Slam title.

Thiem will miss the 2021 tournament due to injury but there are rivals everywhere for Djokovic, most notably recently crowned Olympic champion Zverev.

The big-serving German is on an 11-match winning streak going into Flushing Meadows following victory at the Western and Southern Open in Cincinnati last week.

That was his second Masters 1,000 title and fourth in all (the rung below the Grand Slams) and marks him out as a serious contender. Zverev is fourth seed with Russian Daniil Medvedev and Greek Stefanos Tsitsipas seeded ahead of him in the draw.

Zverev oozed confidence but also acknowledged that Djokovic starts as favourite even though he hasn’t played a competitive singles match since the Olympics.

“I do think that he’s (Djokovic) is still the favourite,” Zverev said after winning in Cincinnati. “He’s going to be fresh, and I think there is also other guys that are in very good form.

“Let’s see how it goes… I still have a lot of work ahead of me. I have to find my rhythm in New York as well.”

In the women’s draw, world No 1 Ash Barty from Australia brings good form to Flushing Meadows after winning in Cincinnati. She also won Wimbledon in July.

“Post-Wimbledon I was completely depleted,” the 25-year-old Barty said after winning the Western and Southern Open. “It was my biggest goal, my biggest dream was to win that one tournament, and it was almost after that I was just a bit numb and I didn’t really know what to feel.

“I think I still have a bit of that now, but being able to again refresh and refocus and think we’re moving to the hard-court season, it’s a fresh kind of start.

“It’s a bonus obviously that I was able to win Wimbledon, it’s a bonus now that I get to continue to do what I love. And we just keep chipping away… If that means more titles, that’s great. If it doesn’t, it doesn’t. That doesn’t matter for me.” DM