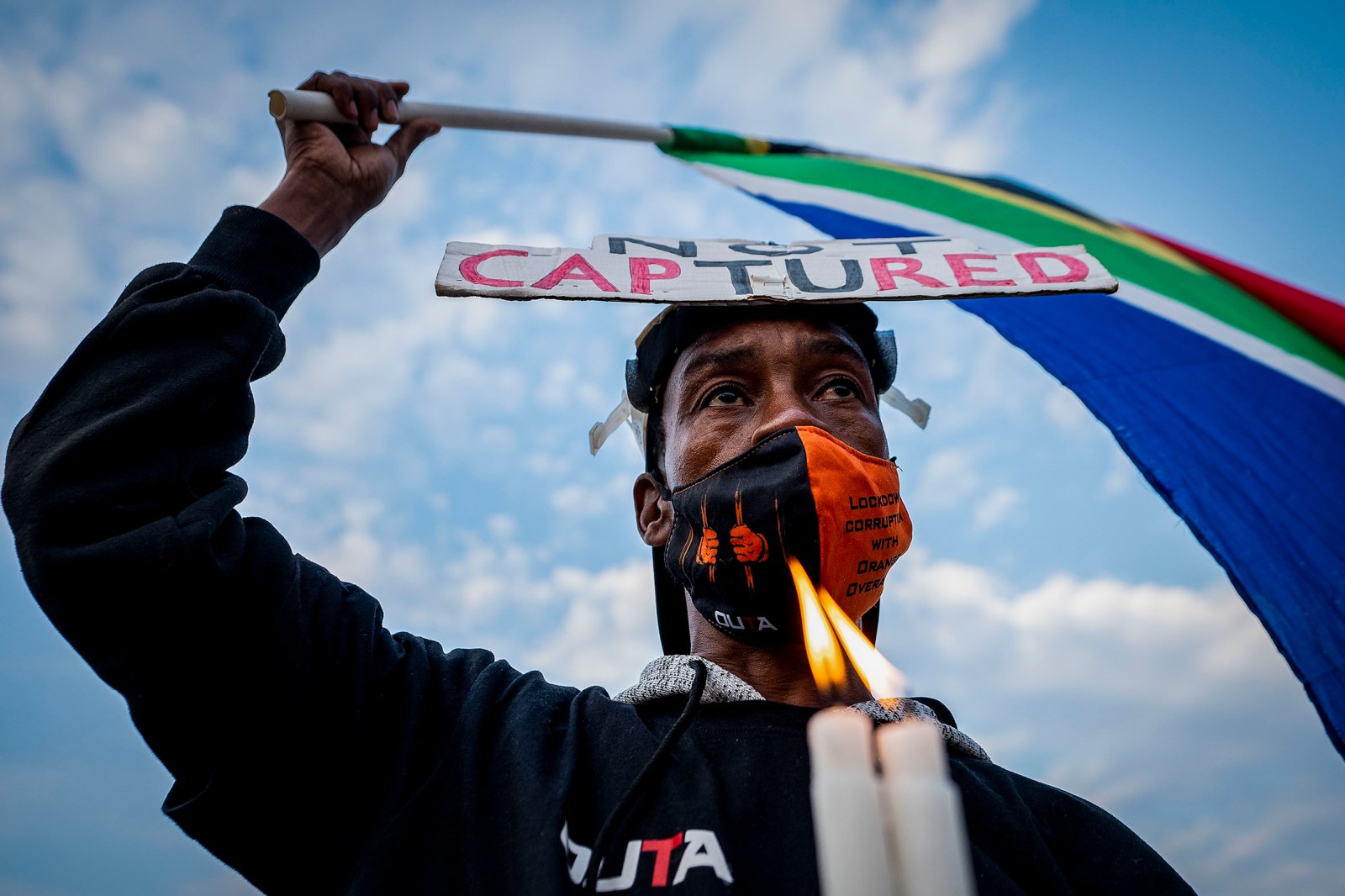 A man at the memorial vigil for Babita Deokaran at Mary Fitzgerald Square in Johannesburg on 26 August 2021. (Photo: Shiraaz Mohamed)

Acting chief financial officer at the Gauteng Department of Health paid the ultimate price in trying to root out corruption.

It was a memorial vigil on Mary Fitzgerald Square, but each candle lit for Babita Deokaran on Thursday night also burnt with palpable rage that the whistle-blower’s life ended in a hail of bullets while corrupt personal protective equipment (PPE) looters she intended testifying against still walk free.

Deokaran was acting chief financial officer at the Gauteng Department of Health. The Special Investigating Unit (SIU) confirmed that she was one of the key witnesses they were working with on their investigations into PPE corruption within the department. She was gunned down outside her Winchester Hills home, in Joburg South, on Monday morning.

A colleague of Deokaran’s, who asked not to be named, spoke to Maverick Citizen before Thursday night’s vigil. He said Deokaran had worked with the SIU way before Covid-19 and the resulting shameful PPE looting in the department, suggesting that she was exposing people and illegal acts in the Department of Health for at least the past decade.

According to the colleague, as the financial officer, Deokaran was the “smoking gun” that would have the paper trail to sink top-level officials. Deokaran’s decision to clean house would also have shown the web of corruption that requires “a syndicate” to push through paperwork for approval at various stages of processing and to install the pliable people within the department who can be pressured or cut in on deals.

The candlelight vigil was attended by representatives from civil society and activists from the Ahmed Kathrada Foundation, Defend Our Democracy and Outa. Speakers slammed Premier David Makhura, who was present, for failing to run a clean ship, allowing rot to take hold in the province, including in the Department of Health; his failure to be transparent and accountable; and for falling back on lip service, hollow promises, politicking and even crocodile tears.

“Babita’s death is a stain on your credibility and the legacy of this province,” said Kavisha Pillay of Corruption Watch.

Pillay said that in the past few years, Makhura’s premiership has been marked by a “reversal of transparency”. Makhura’s office has repeatedly been under fire for being non-communicative and non-responsive when called to just do its job by answering questions or making information available to journalists and civil society organisations.

Pillay added: “Just days ago, members of the Treatment Action Campaign slept outside your [Makhura’s] office because they are so concerned about what is going on with Gauteng Health and now there is the death of Babita. Corruption is killing our people.”

She said afterwards to Maverick Citizen that unrelenting violence, intimidation and harassment of whistle-blowers continues because there is no political will to protect them. She added that protection has to include sound legal advice, financial support and mental health support.

“These are people who expose leadership at the highest levels, so it’s not in political leaders’ interest to protect them, especially not in a captured, corrupt state.”

Maverick Citizen editor Mark Heywood, who also spoke at the vigil, called the Gauteng Health Department a “crime factory and a crime scene” that has for the last decade been headed by people [including Brian Hlongwa and Qedani Mahlangu] who “at best turned a blind eye and at worst participated in the stealing, knowing that people would die”.

Hlongwa is implicated in a R1.2-billion tender corruption deal dating back to 2007 when he was MEC for Health. He is still to be arrested but his accomplices were charged in 2020. Mahlangu oversaw and approved decisions that resulted in the Life Esidimeni tragedy in which over 140 people died.

Heywood also said that Makhura’s office has stopped publishing expenditure disclosure reports since January 2021, despite promising to do so. His staff hide behind excuses of protecting personal information, he added. Long-awaited lifestyle audits of the province’s MECs have also still not been finalised or made public, and Makhura has repeated failed to “call out MECs” who should be sanctioned for allowing dodgy tenders, procurements and deals some worth millions to be signed off without proper justification or recourse.

Makhura, in his address at the vigil, acknowledged the anger he said he felt at Mary Fitzgerald Square and called it “justifiable”. He also said Deokaran’s killing was a “setback” to the campaign to root out corruption in the Department of Health.

Makhura said his office is in the process of finalising an ethics and integrity report that covers all of the province’s departments and will detail investigations and criminal and disciplinary actions being taken against officials. It will also track how recommendations made have been followed up.

The premier confirmed that the delayed lifestyles audits of MECs and of himself are being finalised and he said that all officials who work with supply chains to approve tenders and procurement deals are being vetted in a new framework for audits being set up in Gauteng.

“Until people are arrested and serve a jail term for corrupt activities, all the things I’m saying here mean nothing. Until the killers of Babita and those who sent the killer – and I am convinced the person who pulled the trigger is not the only source of this killing – are arrested, what I say means nothing.

“Until I take concrete steps to bring the looters and the corrupted to book, you are right to say that all politicians are rotten,” he concluded. DM/MC