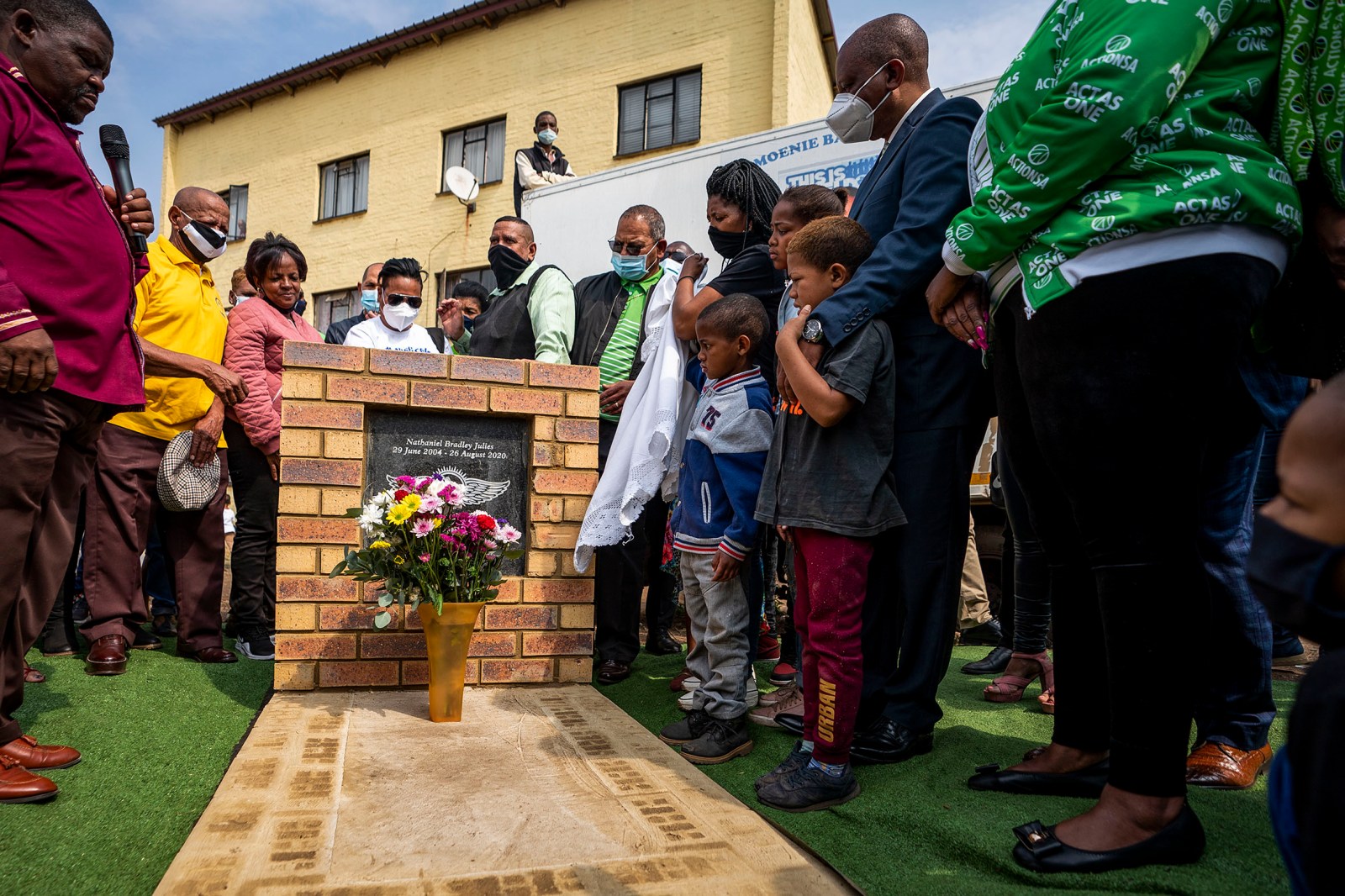 The Julies family unveils a memorial stone to honour Nathaniel who was shot and killed by police in Eldorado Park a year ago. (Photo: Shiraaz Mohamed)

Thursday marked a year since Eldorado Park teen Nathaniel Julies was fatally shot by police. At a memorial ceremony, the teenager’s mother highlighted the difficulties of raising a special needs child.

Thursday, 26 August 2021 marked a year since Eldorado Park teenager Nathaniel Julies was shot and killed by police near his home. The anniversary was marked by the unveiling of a memorial organised by Action SA.

Julies’ mother, Bridget Harris, said: “You know, people like Nathaniel, they’re like 10 children, but it’s one person, and it’s difficult for their parents. I commend them for remaining strong. It’s not easy. One minute you are yelling at the child in the house, the next moment they are out of the yard.”

Harris said despite the challenges she faced raising her son, who had Down syndrome, she remained resolute and strong. She implored other parents to follow her example.

Harris said parents cannot be everywhere all the time, but they still needed to take care of each and every child in their communities. “As mothers, we should never give up. We know most mothers are sitting with drug addict children who come back home at night. And the mothers have to sit and worry about their whereabouts and what might happen to them.

“You know what, I salute you a thousand percent,” said Harris. She said she had enjoyed the 16 years she spent with her son despite the difficulties.

Julies was shot by police while on his way home from buying his favourite biscuits at a nearby shop on 26 August last year. The killing sparked violent protests in Eldorado Park, with community members threatening to burn down the local police station and calling for the dismissal of the station commander.

Three police officers were arrested for the murder and are out on bail. The case will be back in court on 4 October.

The unveiling of the memorial took place near Julies’ home and a few metres from the shop where he usually bought his biscuits. A small crowd of residents and Action SA members and leaders were in attendance.

“He was a beautiful man who was snatched from us unfairly and way too early in his life. Going out and getting his biscuits was his ritual,” community leader and activist Charise Pretorius said.

“He was a beautiful, sweet child. He touched people who didn’t know him… you can imagine how we feel,” said a neighbour who gave her name as Blanche.

“He would be dancing and singing and someone would have given him two slices of bread. He would nag you until he got the attention he was looking for. He greeted everyone,” Harris said.

The killing of Julies united the Eldorado Park community, who rallied behind the family. People from the area packed the Protea Magistrates’ Court on numerous occasions when the three officers appeared.

While Harris expressed her unhappiness at the slow pace of justice, she told the gathering that it was a privilege to have a child with Down syndrome. “They teach us in a different way,” she said.

Action SA leader Herman Mashaba told the family he was sorry that the criminal justice system had let them down and made them feel like they were being denied justice. Mashaba said that Action SA was committed to providing legal assistance to the family and others in the same situation.

Mashaba said their detractors might accuse them of politicking, but that politics was at the centre of all people’s lives. “Let me be honest with all of you. Everything in our lives is politics… from the clothes on our backs to the food in our stomachs — if you are blessed to have access to food at all. Politics affects all of us.”

Socioeconomic problems and general neglect of the area has caught the attention of politicians who see the area as a fertile political hunting ground.

Charise Pretorius said: “I wear many hats in this community. But the one thing that has stuck with me is that we stood together, united.” She challenged community members to step out of their comfort zone. “It’s not about politics, it is about the fact that we need fighters in our streets.”

She encouraged residents to stand up against being silenced and not allow people to prevent them from being who they were. She also thanked Mashaba for being there for the community when they needed someone to stand up for them.

Mashaba accused ANC leaders of trying to divide the Eldorado Park community along racial lines. “They need to answer for their failure to make sure everyone in this community feels safe in their homes.”

Finally, Harris thanked all those who had befriended Nathaniel. “I just want to say thank you for spending time with him.” DM