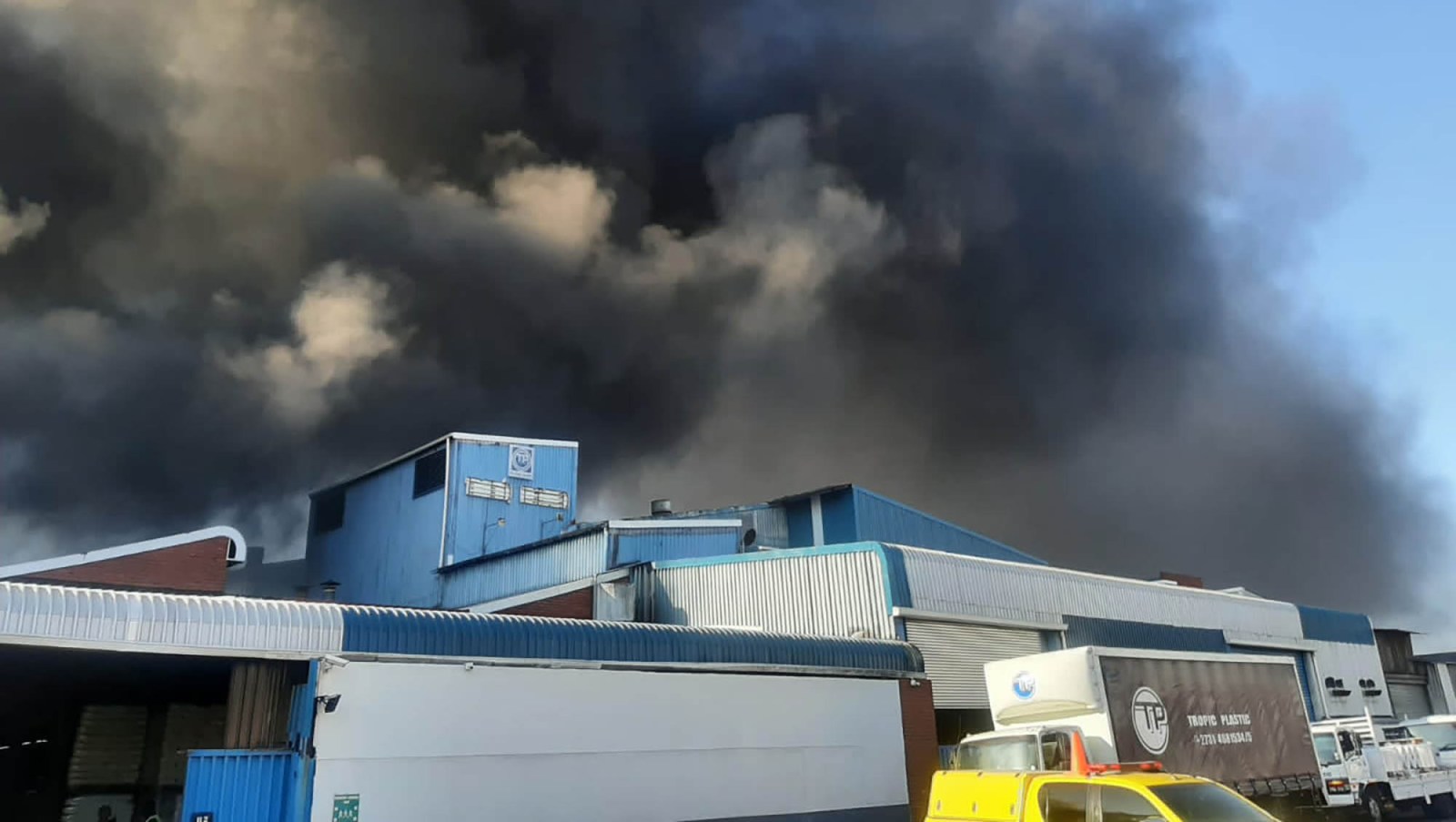 Smoke billows from the KZN Resins factory in Balfour Road, Jacobs, south Durban on 25 August. The main plastics factory in the foreground did not catch fire (Photo: Supplied)

Barely a month after the massive UPL pesticides warehouse explosion in Durban, another chemical factory fire broke out south of the city on 25 August, releasing a cloud of poisonous fumes that sparked an official public health warning by the Ethekwini Municipality. The temperature of the fire under the feet of government regulators has just risen another notch as they scramble to douse growing public anxiety around chemical safety management in the city.

Correction: In an earlier version of this story it was incorrectly reported that the fire at KZN Resins had spread to a plastics company next door. Although a boundary wall between the adjoining companies was damaged during the blaze, the fire department said the fire was contained before it could spread into the plastics company.

For the second time in as many months, thousands of Durban residents were warned to take shelter indoors and shut their windows because of dense clouds of toxic chemical fumes — this time from a fire and explosion that broke out in a chemical resins factory.

The fire started at the KZN Resins factory in Balfour Road, Jacobs, in the early hours of 25 August.

According to Durban environmental justice activist Desmond D’Sa, who lives nearby and who drove to the plant just after the fire began, staff at the KZN Resins facility said that they were on night shift when the fire began.

D’Sa, coordinator of the South Durban Community Environmental Alliance, said residents were woken by loud rumblings just before a ball of fire and dense smoke clouds were seen above the plant, which manufactures a variety of synthetic resins such as hydroxy, acrylamide and thermoplastic resins.

D’Sa said the fire burnt for at least five hours before eight fire engines brought the visible flames under control. Just before 3pm, the Ethekwini Municipality broadcast a public health warning urging nearby residents to stay indoors as the plant was still smouldering and releasing toxic smoke.

“Areas affected include Wentworth and Merebank, but due to a change in wind directions, areas such as Clairwood, Montclair, Bluff and Mobeni may also be affected.

“As a precautionary measure, residents are advised to close their windows and doors and to put wet cloths over ventilators until the smoke clears. Residents are further advised to refrain from outdoor activities from impacted areas. Officials will be on site until the situation is resolved. The public will be informed in the event of new developments.”

However, said D’sa, he saw no visible signs of city emergency officials physically warning residents of surrounding areas to stay indoors or to close windows.

Nor did city officials appear to have the capacity to collect samples of toxic fume levels, prompting his alliance to take their own “bucket samples”, a rudimentary method developed in the United States by community activists exposed to frequent chemical releases from nearby petrochemical operations.

He said the fire brigade had also used large volumes of high-pressure water to douse the fire and it remained to be seen whether any waterborne overflow of chemical poisons would soon enter Durban harbour to kill fish and marine organisms in one of the country’s largest estuarine fish nurseries via the Amanzimnyama Canal and stormwater drains.

The latest chemical fire explosion comes as government regulators battle to allay widespread public anxiety around the aftermath of the arson attack on the 14,000m2 United Phosphorus Limited (UPL) pesticides and agrochemicals warehouse in Cornubia, north of Durban.

Earlier this week, following an oversight inspection at the UPL warehouse by the National Assembly’s committee on environmental affairs, the committee compiled a scathing report urging government departments to establish a multi-stakeholder forum to ensure that the public was kept properly informed about the public health and environmental implications of the UPL chemical inferno that lasted for 11 days.

In a report adopted on 24 August, the committee said it had received complaints from community groups that there had been a lack of communication from both the government and UPL.

Concerns were also raised over the exclusion of the representatives of communities and NGOs from the government Joint Operations Committee “even though they represent the very people who bore the brunt of the events”.

“UPL had not made any visible efforts to show empathy for its employees and surrounding communities, with the human health impact of the events not assessed nor communicated. The representatives believed that the latter would have a devastating effect on the lives of communities in the long term. A medical team should have been put together from the beginning to attend to the impact of the incident on human life and mitigate other risks”, the committee reported.

The report included that:

“Following the interactions with the stakeholders, the committee makes the following findings and observations:

The committee further recommended that: