The Angel of Hoedspruit: One woman’s healthcare project tackles HIV and Covid in Limpopo 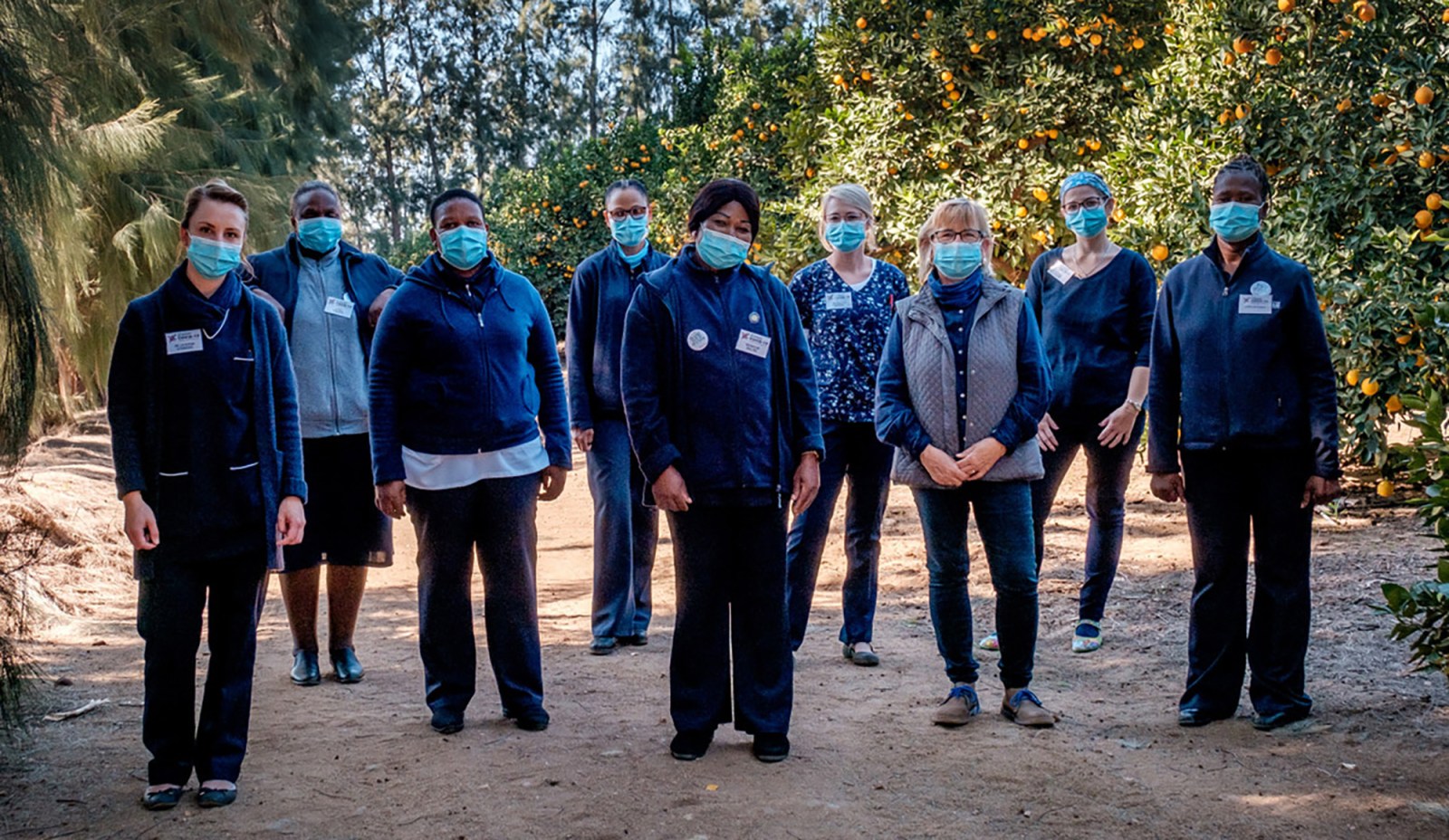 Christine du Preez (third, from right) and her Hlokomela team led the charge in the Greater Hoedspruit area, supporting the local agricultural sector in the roll-out of measures and protocols to curb the spread of the coronavirus. (Photo: Alex Shapiro)

The Hlokomela healthcare NGO is fighting the scourges of Aids and Covid-19 among farm workers in Limpopo. It is led by its passionate and dedicated founder, Christine du Preez, known as the Angel of Hoedspruit.

A veteran former government health worker started her own healthcare non-governmental organisation (NGO) to fight the HIV/Aids epidemic in Hoedspruit some 16 years ago.

Today, working with her son and former Limpopo health department colleagues, she is putting the passion and lessons learnt to good use in the fight against Covid-19.

MJ du Preez says his mother’s Hoedspruit NGO is planning to vaccinate “1,000 at a time” against Covid-19 by the end of August.

MJ is speaking fast, the words leaving his mouth as fast as a Sputnik vaccine greasing palms over a shot of vodka.

His mom is Hlokomela healthcare founder Christine du Preez, and MJ is describing the rural challenges the NGO is facing in the Covid-19 vaccination programmes they have started running.

He says they vaccinated 500 patients in five hours, stopping only because they ran out of vaccines. He speaks of “a thousand people pitching up” instead of the expected 500 at their second vaccination session.

This past week they aimed for 1,000 jabs, because, says the young Du Preez, there is a need. “We have applied to become a vaccination centre, because the clinics are overrun,” he says.

It was a similar need that drove his mother, a nursing sister who began life as a Free State mine doctor’s daughter, to start Hlokomela in 2005. “I started the programme because I saw farm workers start dying [from HIV/Aids],” she says.

Married to a local mango farmer, Du Preez says she had been heading up Limpopo’s primary healthcare services in the Hoedspruit district at the time, “sourcing and administering antiretrovirals [ARVs] privately when it was politically dangerous to do so”.

This was roughly when the Free State-born career health professional says she had first come into direct contact with the overwhelming effects of the HIV/Aids pandemic. “All these people kept dying”, she said, remarking that she had noted “a shockingly high HIV-TB prevalence plus a variety of chronic illnesses” among the seasonal mango and citrus pickers in the Hoedspruit area.

Without a major focus on HIV then, South Africa was still firmly rooted in the Thabo Mbeki era of denial, and Christine says she “got kits to test them and then the penny dropped” that people were HIV positive.

When Du Preez “went solo”, leaving Limpopo’s health department to start Hlokomela, she says virtually no labourers knew their HIV status. By 2012, some 16,200 fruit pickers had been tested, with those who tested positive referred for treatment, she says.

Today she confirms that 90% of farm workers living with HIV know their status, and that 90% of all patients receiving ARV therapy are virally suppressed.

Antoinette Ngwenya, who has been working with Du Preez since she started Hlokomela, says she is widely known to the people of Maruleng Local Municipality as “the Angel of Hoedspruit”.

“She has a passion, a calling to be a healthcare worker. Her purpose in life is healing.”

Hlokomela’s HIV programmes have been so successful that it is apparently “a challenge to get HIV funding” these days because of the low prevalence of HIV in the Hoedspruit farming community.

While this medical matriarch was working with clinics in 2004, she was approached by the International Organization for Migration – linked to the United Nations – who asked her to assist with programmes involving migrant workers, “beyond HIV, in all aspects of healthcare”.

The upshot of this connection was that Christine formed the Hoedspruit Training Trust, a non-profit organisation. Through the trust, Du Preez has trained nompilos (“mothers of life” in isiZulu) to treat and educate farm workers about primary healthcare, immunisation and HIV/Aids.

In 2007, Du Preez started her first farm-based wellness clinic for farm workers, closer to their place of work. Now there are two, plus mobile clinics that visit game lodges, treating staff in nearby game reserves like greater Timbavati and Klaserie.

Ngwenya says: “If there is an accident on the road or someone is sick in their house, they call Christine.”

Du Preez says Hlokomela is planning to vaccinate “a thousand people per session” against Covid-19 by the end of August. And when she isn’t there, as with her recent, short southern Cape holiday with her husband, she says MJ holds the fort.

“I am very proud of him. He took the lead in organising the vaccination process … handles the communication; he has the ability to communicate with people in a gentle way”.

MJ confirms that when Hoedspruit’s Sekororo Hospital has a vaccination-drive scheduled, it is often facilitated by Hlokomela at a site in the town.

He says providing assistance is never simple, usually involving a battle around local politics and the supply of vaccines.

“Although most clinics in Limpopo have both Johnson & Johnson [J&J] and Pfizer [vaccines], … for farm workers and migrant workers especially, the J&J makes sense, as it’s just one shot, and they may not be around for the second jab.” MJ says they have adapted some of their existing projects to Covid-related needs, such as the Hlokomela sewing project now being used to make masks, and their herb garden having been transformed into a food distribution centre. He says his mother’s historical bond with the Limpopo health department officials in the Maruleng Municipality has provided for positive cooperation and support for the NGO’s initiatives.

“Christine’s relationship with former nurses from the HIV days, some of them maybe now hospital departmental heads, helps a lot. There is loyalty towards her.”

MJ says they need R10-million a year to operate, with the donated funds consumed by their existing programmes, besides the requirements presented by Covid-19.

“Christine took it upon herself that we would vaccinate, even without premises,” says

Ngwenya. She further confirms that Hlokomela has received no funds to run the vaccination programme, but that they are pressing ahead regardless. MJ says his mother thrives on managing crises.

“The government doesn’t pay nurses,” says MJ, “but we have to make it [the vaccinations] happen.

Hope has been restored

Christine and Ngwenya speak of the positive “public-private” relationship Hlokomela has with the Limpopo health department, like government ambulances collecting patients from Hlokomela clinics and the clinics sharing medical supplies when the local government hospital is in need. Du Preez says HIV is no longer shameful in Hoedspruit’s farming surrounds, and that hope has been restored in those affected by HIV.

“When we started our work, people would not admit to being HIV positive; now they are saying, ‘I am HIV positive, but I can also do this [farm] work.’

“Now Covid is here and we will have a story to tell again,” she says. DM168