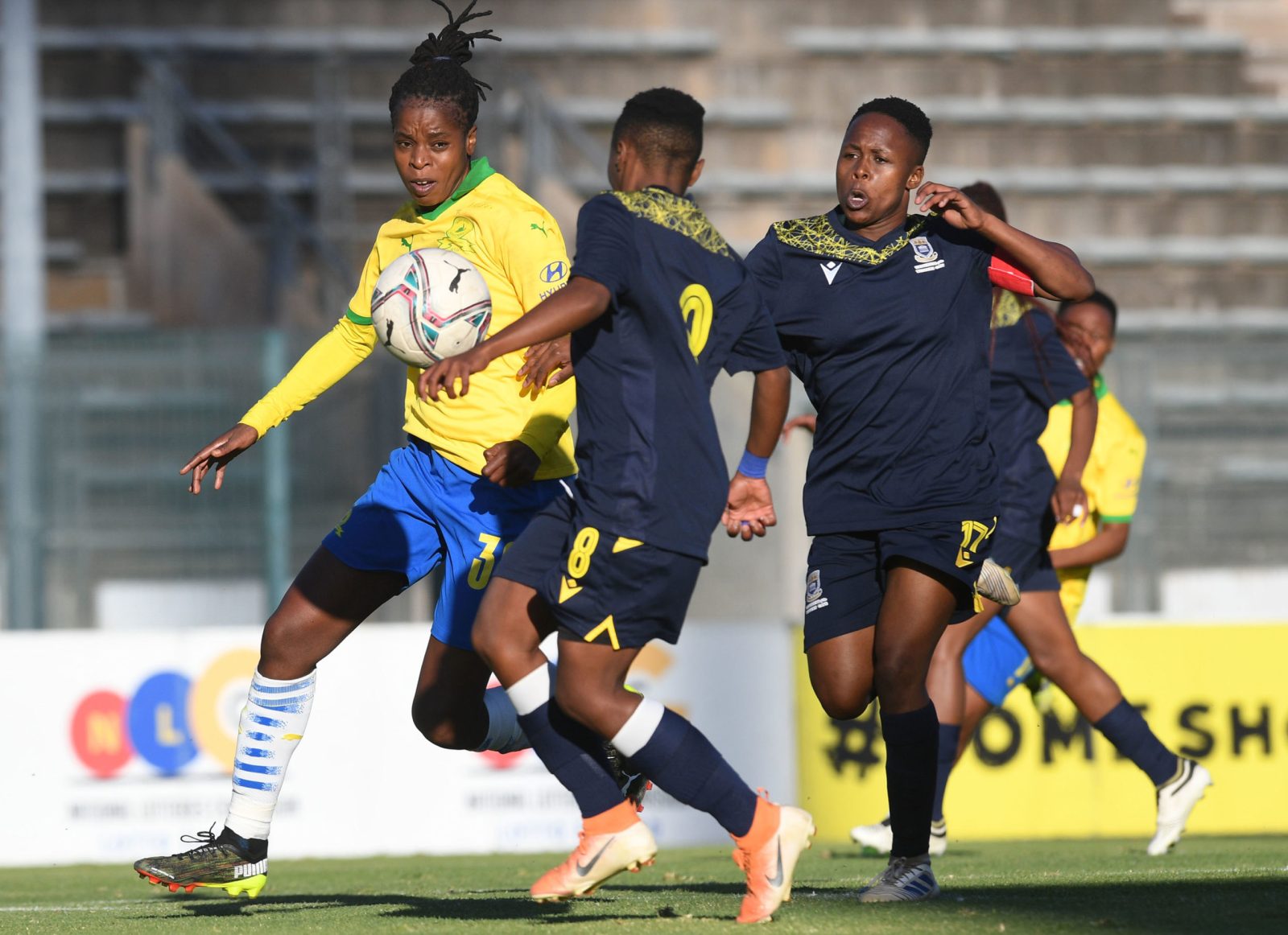 Bongeka Gamede of UWC challenges Andisiwe Mgcoyi of Mamelodi Sundowns (left) during the 2021 SAFA National Women's League match Between Mamelodi Sundowns and UWC on the 09 May 2021 at Lucas Moripe Stadium. The Sundowns Ladies are in Group B the CAF Women’s Champions League, which begins this weekend. (Photo: Sydney Mahlangu/ BackpagePix)

Years after it was first mooted, a Champions League competition for female football teams on the African continent will take place in 2021. Before that though, teams have to play regional qualifiers.

The inaugural Caf Women’s Champions League is scheduled for the end of the year. In recent weeks though, a giant step towards the long-planted seed of such a competition for female footballers finally sprouting was taken.

To decide the teams that will participate at the final competition in Egypt later this year, zonal qualifiers are being played as elimination rounds.

The top six teams – one from each Confederation of African Football (Caf) zone – and the host of the final tournament (Egypt), as well as one extra team from the zone holding the title of the previous Women’s Africa Cup of Nations (2018) will qualify for the tournament.

The latter spots have already been booked with Nigeria’s Rivers Angels and Ghanaian side Hasaacas Ladies, who both reached the final in the B zone of Western region, securing their tickets to Cairo.

“We have seven teams taking part in 2021, but by next year we hope to have all 14 of our member associations participating. This is just the start, but we are putting a peg in the ground,” Cosafa secretary general Sue Destombes said.

The draw saw Sundowns being seeded in Group A along with Lesotho Defence Force, Double Action Ladies from Botswana and Eswatini’s Manzini Wanderers.

The top two teams in each pool will advance to the semifinals.

A step in the right direction

Admittedly, the continental competition’s rollout coinciding with a global pandemic has somewhat deprived it of the sort of fanfare such a step for the progression of women’s football warrants.

“With the Cosafa and Caf Women’s Champions Leagues coming on board, I believe we will have the chance to compete with the European countries in the future,” said Jerry Tshabalala, coach of Mamelodi Sundowns Ladies.

“How will the Caf tournament help us? Because of the increased level of competition among the players, one would know that after winning my local league, the chances are there for me to go and compete against the other African countries. It would mean a lot for us to qualify.”

“It’s a big opportunity, we don’t have that many players in our country that are playing abroad, so it will be a big opportunity for them to give themselves exposure to play for teams outside Lesotho,” he said. “That experience will give our national team the opportunity to improve also. It can make all our young players better. It is huge for women’s football.”

It will be a while before the competition reaches the heights that those invested in women’s football would like. However, the launching of the tournament after years of it being in the pipeline is a big stride forward for women’s football on the continent.

The Uefa Women’s Champions League in Europe is in its 20th year and has grown exponentially as a brand over that time. In another major step forward, Uefa announced earlier this year that from the 2021/2022 season, there would be an increase in prize money.

Every club that qualifies for the competition will benefit from the increased rewards available, whatever stage they reach. According to initial estimates, each club taking part in the group stage will receive a minimum reward of €400,000 (over R7-million) – about five times more than before in the round of 16. The winner stands to earn up to €1,4-million.

The African edition is still new, but with the vision of the current Caf president, Patrice Motsepe, its growth promises to be rapid. The former Sundowns president has expressed his desire to see the sport rise for the duration of his tenure.

“We want women’s football, in the period of my presidency, to be significantly growing, progressing and prospering,” said Motsepe.

The tournament is being hosted in Durban and all matches will be played at the King Zwelithini and Chatsworth stadiums from 26 August until 4 September. DM