SANDF IN KWAZULU-NATAL AND GAUTENG

Soldiers claim Operation Prosper a shambles, with lack of food, vehicles and uncertainty around who is in charge 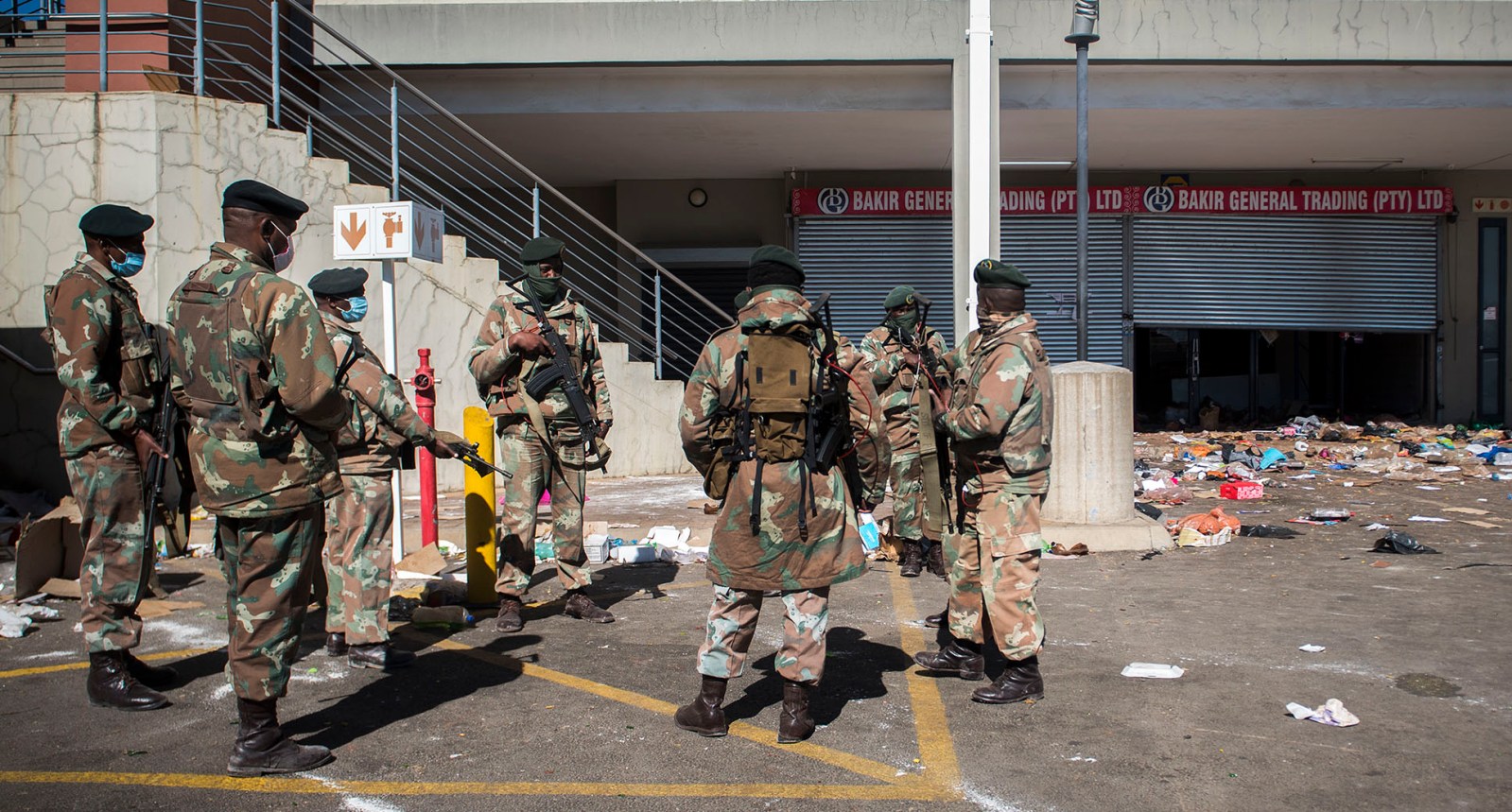 For close to a month, troops deployed in response to the July unrest in KwaZulu-Natal and Gauteng have been complaining of unreliable food supplies. This week their dissatisfaction hit social media, along with the suggestion that some soldiers would withdraw if the situation was not addressed. But SANDF authorities claim that all is well.

“We haven’t had food for five days,” Lwazi*, a soldier who wished to remain anonymous, told Daily Maverick on 17 August.

“There’s food in the messes, but we are not allowed to eat it because we are told we will get a food allowance. Soldiers from certain deployments have had to be removed because they are hungry. Either they should feed us, or pay us.”

What Lwazi was describing was, at that stage, not news to military authorities. The army’s top brass was well aware that the troops deployed in Gauteng and KwaZulu-Natal as part of Operation Prosper — with a peacekeeping mandate following July’s unrest — were complaining about their food supply.

As far back as 29 July, the South African National Defence Union (Sandu) posted on Facebook that it had been “inundated with complaints over the past couple of days from deployed members, especially in KZN region… that their daily rations are inadequate, infrequent and not up to standard”.

When Daily Maverick contacted the Department of Defence for comment on the issue last week, we were told over the course of several days that an official response would be forthcoming. None arrived.

Forcing authorities’ hand, however, was the appearance of these allegations on Twitter this week — where they were circulated by leaders of the Economic Freedom Fighters (EFF), alongside the claim that hungry and frustrated soldiers were on the verge of abandoning their posts.

A 23 August statement from the South African National Defence Force (SANDF) read: “The SANDF dismisses with contempt and scoffs at the baseless insinuations aimed at causing panic in the country… The SANDF acknowledges that there were challenges regarding ration packs and payment of meal allowances. These challenges received the necessary attention. As a measure to address developing challenges, there are processes in place to prioritise and address challenges as and when they prevail.”

The official word, then, was an acknowledgement that troop hunger had been a problem in the past — but was now resolved.

This is not true, say soldiers on the ground.

Speaking to Daily Maverick again on Tuesday, Lwazi said that a meal allowance had materialised since he last commented — but it covered only a few days.

“At this stage, we haven’t eaten since Sunday,” Lwazi said.

He explained that as an act of desperation, a soldier based in KwaZulu-Natal had sent EFF leader Julius Malema an SMS detailing the troops’ plight, which was how the situation spread on social media.

“We haven’t been given any timeline for when things will be resolved,” Lwazi said.

The soldiers’ union, meanwhile, indicated on Tuesday that its attempts to “engage higher level command structures” on the problem had been ongoing for the past four days.

“However, no DoD official could provide Sandu with any proposed solution or plan of action,” read a letter sent by Sandu’s lawyers to newly appointed Defence Minister Thandi Modise.

“The longer this issue remains unresolved, the more demoralized the troops become, which in itself poses a risk as high morale is a prerequisite for efficient military operations. The situation in its current form casts serious questions in the public eye on the professional functioning of the SANDF, which is the last thing South Africa needs under current circumstances.”

The letter warned that if Minister Modise did not “immediately intervene”, the union would take legal action.

The number of South African soldiers now on active Operation Prosper duty has been reduced to 10,000, but other soldiers are also deployed on other tasks — such as Covid-19 lockdown border policing, known as Operation Corona. At its height, Operation Prosper required 25,000 soldiers, the greatest number of SANDF personnel deployed simultaneously since 1994.

African Defence Review director Darren Olivier told Daily Maverick: “To some extent [the inadequate food supply] can be understood and forgiven because the sheer scope of the deployment was unprecedented and far in excess of what the logistics system would normally be equipped or expected to handle, so incidents here and there were inevitable.”

Olivier said the fact that there were still soldiers who had not received ration packs or meal allowances was, however, “unacceptable… and can only mean a serious lack of care or urgency from the military’s senior leadership”.

The food issue is just one of a set of operational problems which has allegedly beset Operation Prosper. Lwazi told Daily Maverick that the deployment was “problematic from the get-go”, with other issues including a lack of vehicles and fuel.

“But the thing that raised eyebrows the most has been the confusion around who is in charge,” the soldier said.

Lwazi explained that normally a deployment of this nature would be administered by the Joint Operations Division, but instead, it appeared that the army was running this operation.

“For the first few weeks there was conflict between the army and Joint Ops and people were getting conflicting orders about what we should do and where we should go. They seemed to sort it out at the end of July, with the army stepping back. But as of mid-August we have this problem again: who is really running the show?”

African Defence Review’s Olivier confirmed that in normal circumstances, all deployments are handled by the Joint Operations Division, which is a separate branch of the military from the army.

“What happened instead in this case was that forces were deployed under ad hoc command headquarters that were created and staffed by senior South African Army officers, bypassing Joint Operations,” said Olivier.

He said this was not a problem in terms of the experience of the commanders in charge, all of whom appeared to have previous Joint Operations command experience. Olivier described it as “irregular and risky” in terms of the rest of the staffing and structure, however, as the organisational skills and expertise for sustained deployments lie within Joint Operations rather than the army.

“That just increases the odds of something going wrong,” Olivier said. DM