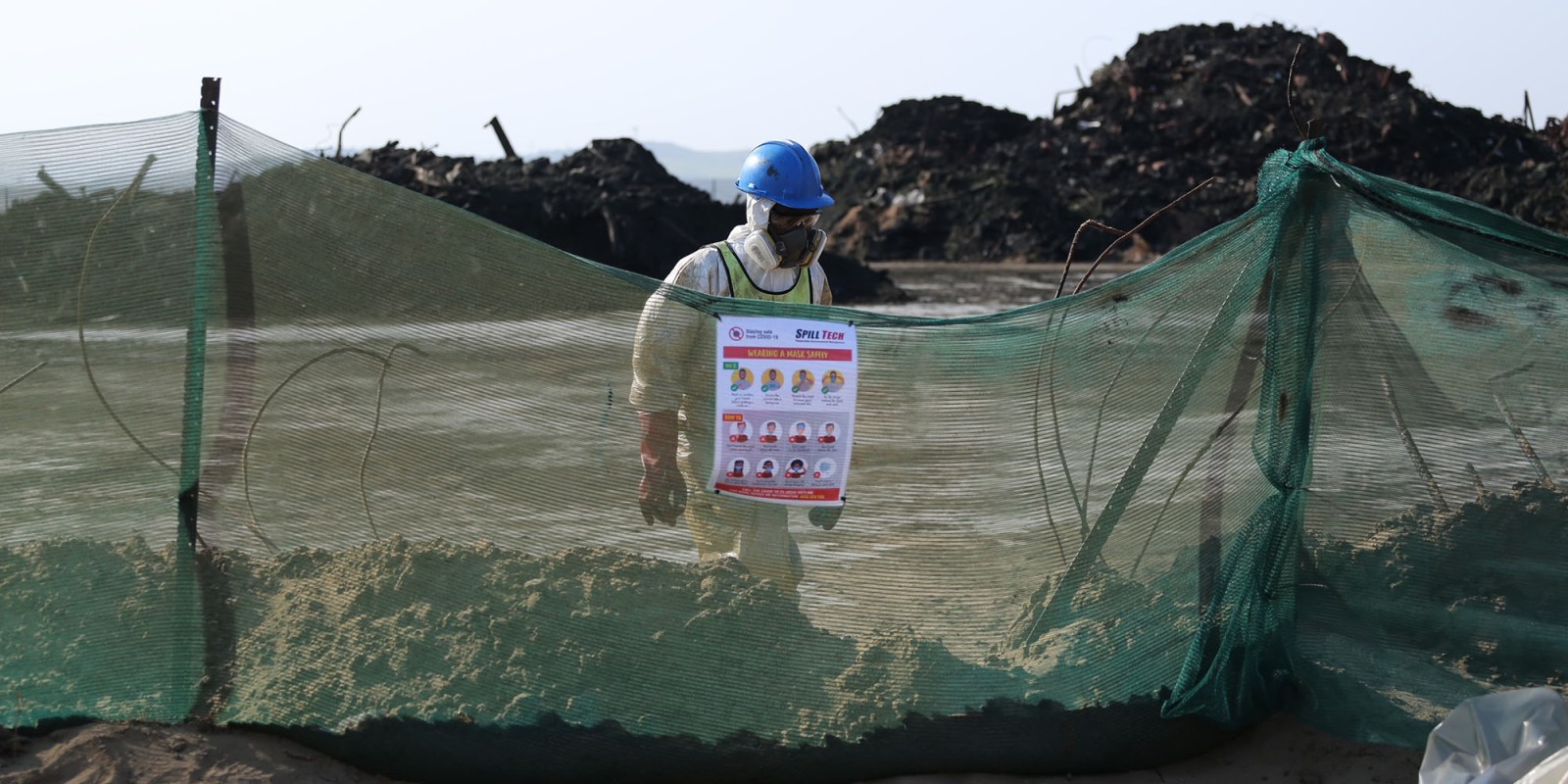 Clean-up teams with respirators and chemical-resistant PPE wade through the toxic soup of chemicals left behind from the fire and fire-fighting efforts at the UPL plant in Cornubia, north of Durban. (Photo: Mlungisi Mbele)

President Cyril Ramaphosa has been asked to declare a state of disaster to ensure that independent experts are brought in urgently to assess the full impacts of the UPL chemical inferno on human health and the environment. That’s the plea sent to his office on Monday by civil society groups increasingly exasperated by their exclusion from an inter-governmental investigation that has failed to publish a single chemical pollution test result — seven weeks after the UPL warehouse went up in flames on 12 July.

Civil activists sent an open letter to President Cyril Ramaphosa on Monday, imploring him to declare the Cornubia chemical warehouse catastrophe a disaster in terms of the National Disaster Management Act, to ensure a rapid flow of funding to hire independent toxicologists and other experts, and also initiate a state-led health monitoring scheme for people exposed to the potentially deadly cocktail of chemical fumes in several parts of Durban for 11 days.

Their call to Ramaphosa follows concern from sources close to the investigation that evidence is either disappearing at a rapid rate — both from the site and surrounding areas — or that chemical toxicity sampling and analysis may be inadequate for deadly compounds such as dioxins and furans which can be produced when a mixture of certain chemicals are heated at high temperatures.

“Dear Mr President: By now you should be aware of the harm caused by a section of the Cornubia Presidential Project, north of Durban, following the burning of a warehouse rented by United Phosphorus Limited (UPL) to store tons of hazardous chemicals… We believe this incident is not being managed effectively and request your urgent intervention,” the newly established Cornubia UPL Fire Civil Society Action Group said in its open letter.

So far, there has been just one inter-governmental media briefing on the impacts of the inferno and a limited number of press statements from the Ethekwini municipality, mostly centred on the pollution of the Umhlanga Lagoon and continued closure of beaches between the Umgeni and uMdloti rivers.

The warehouse is believed to have stored at least 6,500 tonnes of pesticides and other agrochemicals — many of which are toxic and have been linked to cancer, fertility problems and other serious health impacts — but the government committee investigating the incident has yet to release a single laboratory test result of chemical pollution of the air, water or soil in the vicinity of the explosion.

While civil society experts and residents directly affected by the pollution are not represented on the Joint Operational Committee (JOC), the Mumbai-based chemical giant UPL is part of the committee and also appears to have appointed its own consultants to shape the scope of the investigation and the types of chemicals to be analysed in soil, air and water samples.

In an internal letter sent to a local civic activist at the weekend, provincial MEC for Economic Development, Tourism and Environmental Affairs, Ravi Pillay, rejected requests for civil society to be represented on the JOC team investigating the Cornubia explosion.

Writing on behalf of MEC Pillay, his department’s legal director Karl-Heinz Kuhn said: “It is acknowledged that the incident has had a disastrous effect on the environment surrounding the immediate vicinity of the premises where the event occurred, as well as the surrounding ecology, including the coast and marine resources. In addition, the possibility exists that the incident may lead to adverse health impacts on communities surrounding the area and adjacent to the coastal waters.”

However, asserted Kuhn, civil society groups concerned about these impacts were not “automatically entitled” to access information from the government team unless their requests complied with the provisions of the Promotion of Access to Information Act (PAIA).

But the UPL Fire Civil Society Action Group is outraged by this attempt to brush them off.

“We have a right to know what we inhaled, could have ingested and were (and are still being) exposed to from the pollution of the air, the soil and water. Civil society has been barred from the JOC and government has reneged on promises to include us in the process and provide us with access to data and reports,” Action Group representative Judy Bell said in the letter to Ramaphosa.

“Please would you ensure (that) this incident is declared a disaster in terms of the National Disaster Management Act for:

The president should also ensure that money was set aside by UPL (and any other implicated entity) in trust for future health claims and to address ongoing health surveillance and work required to remediate the environmental harm; to obtain the advice, scientific input and oversight of independent experts with experience of these kinds of disasters.

This fund should also make provision to support those who had lost their livelihoods, (such as fishers, food gardeners, tourism entities) and also ensure effective public communication with routine updates.

The president should also ensure that civil society was represented on the JOC and have access to all documentation submitted to the JOC by all stakeholders (including reports prepared for UPL by their appointed consultants).

Information should also be provided to all affected communities, in appropriate languages, about the incident and the issues affecting their lives and livelihoods.

Further, the government should take note of the lessons learnt from the Cornubia toxic fire to avoid a similar incident elsewhere, including the need for sufficient fire-fighting personnel, expertise and equipment for all municipalities, the need for regular warehousing inspections to assess legal compliance and risk of harm, and a proper system for the notification of all hazardous chemical imports to environmental health officials via ports.

The action group’s request to Ramaphosa has also been sent to the ministers of forestry, fisheries and environment, health, trade and industry, employment and labour, and co-operative governance and traditional affairs.

The Presidency has not responded to requests for comment. DM/OBP