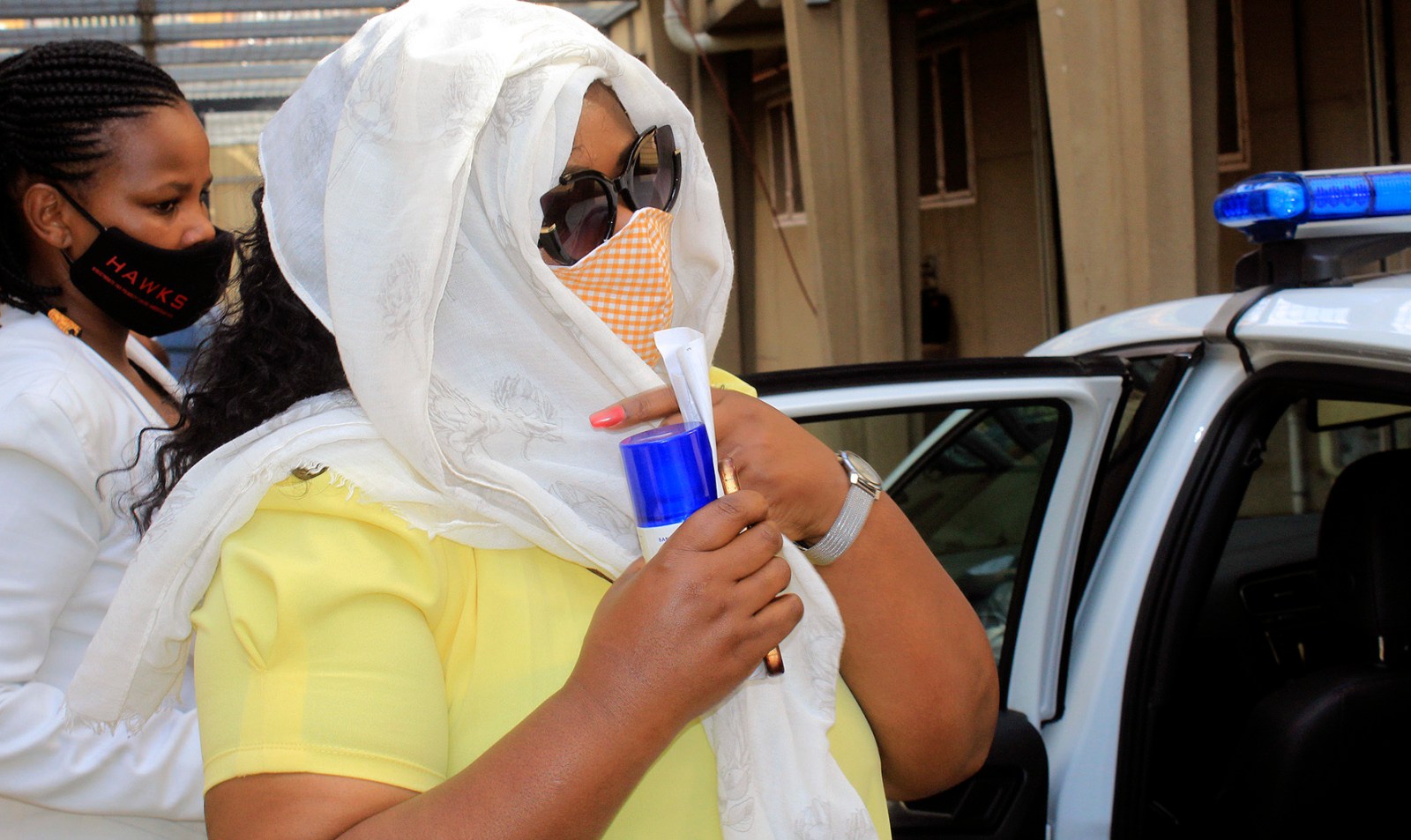 Phathilizwi Training Institute’s Phumza Gambula shortly after her arrest and being taken to the Mthatha Regional Court linked to charges of R4.8 million Covid-19 fraud and corruption. (Photo: Hoseya Jubase)

A special tribunal will rule on Wednesday if an order that stopped payment for a controversial door-to-door Covid-19 awareness campaign in the OR Tambo District Municipality in the Eastern Cape will be rescinded after the owner of the company mounted a legal fightback.

Phathilizwi Training Institute, a company that conducted a controversial R4.8-million door-to-door Covid-19 awareness campaign in the OR Tambo district in the Eastern Cape, has asked a special tribunal to overturn a provisional order that payment to the company be stopped.

Earlier this year the Special Investigating Unit (SIU) obtained an order that the contract for the door-to-door campaign was done in contravention of supply chain management rules and payment for the contract was stopped.

In October 2020 a director of the company, Pumza Gambula, was arrested for fraud by the Hawks. She has been released on bail. In its report following an investigation, the SIU also advised that steps be taken against a number of municipal officials.

At the time of Gambula’s arrest, Hawks spokesperson Colonel Katlego Mogale said it was alleged that the company and its sole director intentionally submitted fraudulent documents purporting that she conducted door-to-door awareness campaigns for the prevention and containment of Covid-19 in the rural communities of Port St Johns, King Sabata Dalindyebo and Mhlontlo.

“The director then invoiced the three municipalities to the tune of over R4.8-million for services that were partially rendered with fraudulent supporting documents,” Mogale said.

This year the legal team for the SIU, which brought the application for the setting aside of the contract, argued that the Phathilizwi Training Institute had been awarded the contract without following procurement procedures.

Several tender irregularities were also highlighted during the hearing, including that a tender had been awarded to Phathilizwi for an education campaign in January 2019. This contract expired at the end of January 2020. Phathilizwi had asked the municipality to extend the contract by six months, but instead the contract was extended by another two years.

The SIU argued that the door-to-door campaign was then conducted ostensibly as part of this contract but it fell outside of the scope of the agreement.

Phathilizwi subsequently rendered two invoices to the OR Tambo Municipality, one dated 21 May 2020 for an amount of R3,036,000 and the second, dated 25 May 2020, for R1,821,600 as payment for services rendered in relation to the door-to-door campaign.

According to papers before the tribunal, the SIU was unable to verify that the campaign had indeed been conducted. Advocate Tshilivhali Kwinda for the SIU argued that it was not in the best interest of justice and the public that Phathilizwi Training Institute be paid the amount claimed under these circumstances.

An investigator with the SIU, Heinrich Hechter, stated in papers before court that due to Alert Level 5 regulations that were in operation at the time it would not have been possible for the campaign to be carried out.

On Monday advocate Lusindiso Matotie for Phathilizwi said that it was their case that the order must be rescinded as they had a bona fide defence. He said the extension of Phathilizwi’s contract was done lawfully and as a result the contract is not invalid. He added that they had provided proof that the services that were agreed upon were indeed rendered.

Judge Lebogang Modiba is expected to make a ruling on Wednesday.

Meanwhile, the council for the OR Tambo District Municipality has been disbanded and placed under administration by the provincial government.

Last year a forensic investigator for the municipality, Msekeli Nqabeni, stated in a report that Phathilizwi was initially not registered for VAT and had tendered a price of R660 per person for the awareness campaign. It subsequently registered and then added VAT to this quotation.

Investigators found that while some municipal officials were still waiting for the amended quote, as they said the price was too high, the contract with the company was signed without involving supply chain management.

Purchase orders were then generated retrospectively.

The report further stated that a senior municipal official said that the contract was extended on or about February 2020 until the end of June 2020.

Investigators appointed by the municipality found that a senior municipal official only checked the invoices “randomly” as “she was cautious of being infected with the virus”.

“According to her, she noted that some of the attendance registers had the same handwriting and the same signatures. She indicated that she was informed that people avoided using the same pen and exchanging papers as they were scared of being infected by the virus,” the report stated. DM/MC