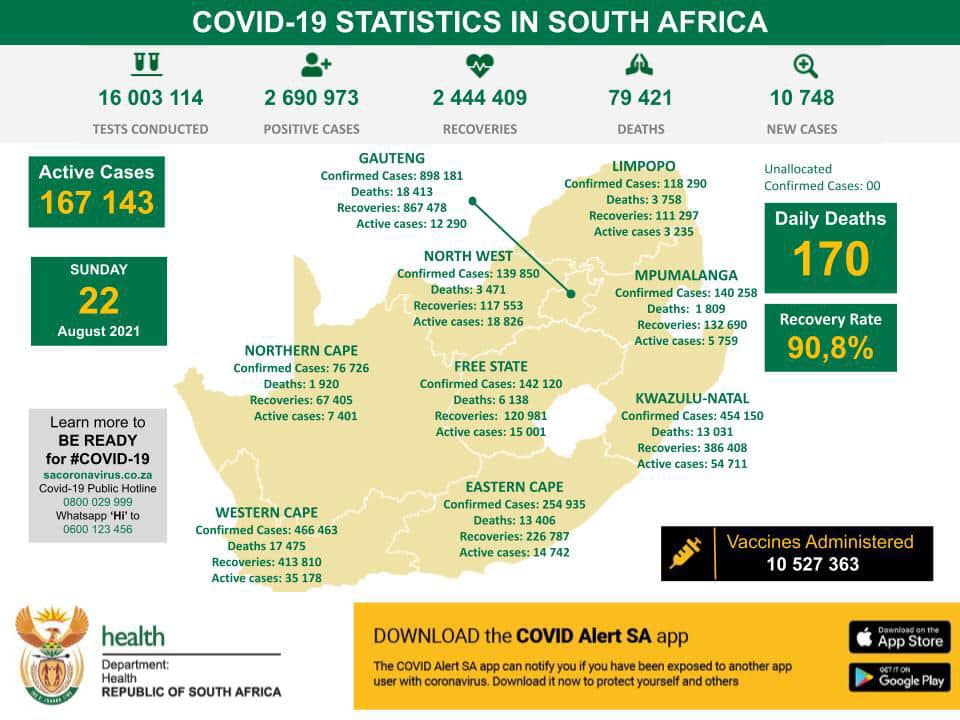 US average daily fatalities ticked over 1,000 on Saturday, apparently for the first time since March, at the tail of last winter’s surge. Average weekly cases now surpass one million as the Delta variant continues to spread, according to data compiled by Johns Hopkins University and Bloomberg.

The expected full approval by the US Food and Drug Administration of Covid-19 vaccines could allow more businesses and institutions to impose vaccine requirements, Surgeon General Vivek Murthy said.

Texas Governor Greg Abbott said on Sunday he is now testing negative for Covid-19, after announcing last week he contracted a breakthrough infection.

“I am told that my infection was brief and mild because of the vaccination that I received,” the Republican governor said in a video posted on Twitter. “So I encourage others who have not yet received the vaccination to consider getting one.”

Abbott, along with fellow Republican governor Ron DeSantis of Florida, is embroiled in a legal battle over preventing localities from imposing mask mandates in schools.

“For businesses and universities that have been thinking about putting vaccine requirements in place,” Murthy said on CNN’s State of the Union, full approval “will actually help them to move forward”. The FDA is expected to give full approval to the Pfizer-BioNTech vaccine as early as Monday.

Murthy also said that people who’ve been vaccinated with Johnson & Johnson’s one-dose shot will “likely” need a booster. But, he said, “We are waiting on some data from the company about a second dose of J&J, so the FDA can fully evaluate the safety and efficacy of that dose.”

An advisory committee to the US Centers for Disease Control and Prevention will meet at the end of this month to discuss the need for booster shots – which President Joe Biden said will be offered starting on September 20.

US average daily fatalities ticked over 1,000 on Saturday, apparently for the first time since March, at the tail of last winter’s surge, according to data compiled by Johns Hopkins University and Bloomberg.

Deaths are a lagging indicator, growing weeks after a surge in Covid-19 cases. While fatalities are accelerating as the US is battered by the Delta variant, they remain a fraction of the peak last winter. Average daily fatalities rose to more than 3,400 in January, the data show. Now 60% of those eligible in the US are fully vaccinated.

Indonesia reported 12,408 new cases on Sunday, the fewest in more than two months, as extended lockdown measures help ease the nation’s worst virus surge. It also recorded 1,030 new deaths, the lowest since July 15, though still the highest daily death toll in the world.

The nation has intensified tracing and capped testing prices to help improve surveillance of the Delta variant, which has spread beyond the capital to outlying islands. Indonesia’s positivity rate stood at 14.8% on Sunday, down from as high as 30% in July.

Daily deaths in Iran hit a new record on Sunday of 684, surpassing 655 fatalities reported on Monday.

France will begin a campaign to increase vaccination rates of students 12 years old and above from the start of the new school year in September, French Education Minister Jean-Michel Blanquer told Le Journal du Dimanche newspaper.

Health officials will either go to schools to vaccinate the students or provide transportation to take them to medical centers, the paper reported. Vaccinating younger students is not on the agenda, Blanquer said.

The decision follows a surge of infections across the country.

Saudi Arabia to use Moderna shot for young

Saudi Arabia will start giving 12- to 17-year-olds the Moderna shot, the second vaccine to be authorised for young people in the kingdom, state-run Saudi Press Agency said on Sunday.

In June, Saudi Arabia approved the use of the Pfizer-BioNtech vaccine for young people. Covid-19 shots from Pfizer, AstraZeneca, Moderna and Johnson & Johnson are the only inoculations considered valid in Saudi Arabia.

Economy Minister Peter Altmaier said he is convinced that there won’t be another lockdown in Germany despite the rapidly increasing number of infections.

“With everything we know today, we can avoid a new lockdown for those who have been vaccinated and those who have recovered,” the CDU politician told Funke. “That also means that restaurants and shops can stay open during winter.”

The workers will have to present Covid vaccination certificates issued by the Philippines and undergo a hotel quarantine, Bello said.

Moderna will supply seven million doses of its vaccine to South Korea in the next two weeks, the country’s premier said on Sunday. The shipment plan, announced by Prime Minister Kim Boo-kyum in a televised meeting with health officials, bolsters South Korea’s bid to have at least 70% of its population inoculated with the first shot by the end of September.

South Korea this month extended the interval between first and second vaccines to six weeks after Moderna unexpectedly said it could supply less than half of the planned 8.5 million doses in August because of laboratory problems.

Phil Valentine, a conservative talk radio host from Tennessee who had been a vaccine sceptic until he was hospitalised with Covid-19, has died at the age of 61, the Associated Press reported. Nashville’s SuperTalk 99.7 WTN station confirmed his death on Saturday, AP said.

A sceptic initially, Valentine advised his listeners to get vaccinated after he contracted the virus, AP said.

Australia should focus on hospitalisations: PM

Australian Prime Minister Scott Morrison said the focus needs to move from Covid-19 case numbers to hospitalisation rates. Fewer people in the country are getting seriously ill or dying even as cases have risen, he said.

“Rising cases need not impact our plan to reopen, and reopen as soon as we can,” Morrison wrote in the Daily Telegraph newspaper. “I know it seems pretty dark now, but it’s always darkest before the dawn, and dawn’s coming. So please hang in there.”

Thailand’s Parliament approved the nation’s $93-billion annual Budget that seeks to ramp up spending on tackling the Covid-19 outbreak while slashing outlays for defense and education. The nation reported 19,014 new Covid-19 cases on Sunday, the lowest daily infection in more than two weeks, and 233 fatalities. Total cumulative infection numbers rose to 1.05 million.

The Delta variant of coronavirus is a big challenge for New Zealand’s elimination strategy and could force the government to rethink the way it responds to an outbreak, Covid-19 Response Minister Chris Hipkins said.

“With a virus that can be infectious within 24 hours of someone getting it, that does change the game a bit,” Hipkins said in an interview on TVNZ’s Q+A programme. “With our Level 4 lockdown, we are very well placed to be able to run it to ground, but we have to be prepared for the fact that we can’t do that every time there is one of these.”

New Zealand has been at the highest level of lockdown since Tuesday after a community case of coronavirus was discovered in Auckland. On Sunday, the country reported a further 21 local cases, bringing the total to 72.

Tokyo may use Olympic venues as hospitals

Olympic venues are spread out throughout the city, which makes them convenient for emergency response, according to the report. Any changes would take place after the closing of the Paralympic Games on September 5, it said.

The U.S. Food and Drug Administration issued a strong and unusual warning on Saturday: “You are not a horse. You are not a cow. Seriously, y’all. Stop it.”

The FDA was reacting to alarms from Mississippi, the state with the worst outbreak in the U.S., that people have been taking ivermectin to treat or prevent Covid-19. The drug is often used against parasites in livestock.

On Friday, Mississippi’s health department issued a warning that more than 70% of recent calls to the state’s poison centre came after people took ivermectin bought at livestock supply centres. DM

– With assistance from Suttinee Yuvejwattana, Cecilia Yap and Carolynn Look.