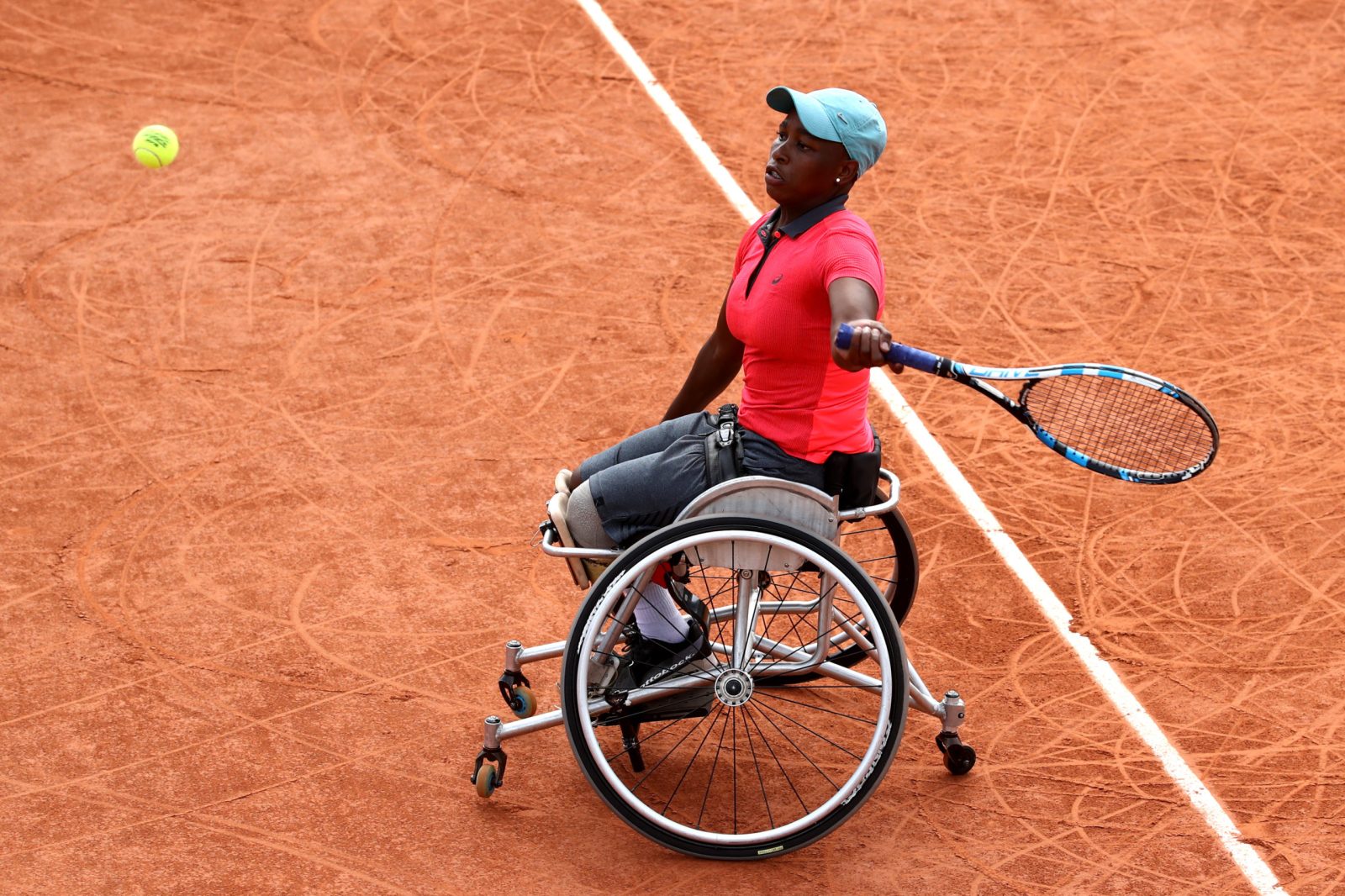 Kgothatso Montjane of South Africa competes in the ladies singles wheelchair first round against Aniek Van Koot of the Netherlands during day 12 of the 2018 French Open at Roland Garros on 7 June 2018 in Paris, France. (Photo: Cameron Spencer / Getty Images)

Many of Team South Africa’s athletes are in good form for the upcoming Paralympic Games.

A total of 34 athletes across seven sporting codes will attempt to improve on the 17 medals Team South Africa won at the Rio Paralympics five years ago.

Montjane is confident that this will finally be her year after reaching the Wimbledon singles and doubles finals recently, although she finished as runner-up on both occasions.

“Wimbledon was a confidence boost and I’m looking forward to Tokyo,” said Montjane. “I’ve always said in Tokyo I just want to aim for a medal – it doesn’t matter which colour – and after my performance at Wimbledon I don’t see why it’s not attainable.”

Eliphas Moripe (competing in his third Olympics), Mariska Venter who will partner with Montjane in the doubles event and veteran Leon Els (a wildcard entry) are also in the wheelchair tennis line-up.

South African Sports Confederation and Olympic Committee’s (Sascoc) Leon Fleiser will be Team SA’s chef de mission and said they will do their best to ensure the athletes’ comfort so they perform at their optimum.

“From a logistical sense, things have been going well and we are excited at the prospect of going to Tokyo and making the country proud. The athletes come first and with the team support staff we have, we are hoping to make it a memorable experience for them.”

The Games run from 24 August to 5 September. Katherine Swanepoel and Alani Ferreira will carry the hopes of the country in the pool. Each broke the national breaststroke records in their classifications at the SA National Aquatic Championships in April and will be eyeing medals.

World champion Anrune Weyers is also a medal hopeful for SA. She is a two-time Paralympian and she’s won World Para Athletics Championships gold, silver and bronze for the 400m, 200m and 100m respectively.

“Our Paralympics have a decorated history when it comes to bringing medals back from these Games and the expectations are no different this year. We are excited to embark on this journey with Team SA’s Tokyo 2020 Paralympians,” Sascoc president Barry Hendricks said before the athletes departed for Tokyo. DM168

Team SA Paralympians and their classification:

T61: Athletes with a leg amputation, who compete with prosthetics in a standing position.

F46: Athletes with arm deficiency, impaired muscle power or impaired passive range of movement in arms, with athletes competing in a standing position.

T44: Athletes with a leg deficiency, leg length difference, impaired muscle power or impaired passive range of movement in the legs, with athletes competing in a standing position.

T62: Athletes with a leg amputation who compete with prosthetics in a standing position.

F63: Athletes with a leg amputation, who compete with prosthetics in a standing position.

T62: Athletes with a leg amputation, who compete with prosthetics in a standing position.

T63: Athletes with a leg amputation, who compete with prosthetics in a standing position.

T47: Athletes with arm deficiency, impaired muscle power or impaired passive range of movement in arms, with athletes competing in a standing position.

T37: Coordination impairment, for athletes competing in a standing position.

F38: Coordination impairment, for athletes competing in a standing position.

T37: Coordination impairment, for athletes competing in a standing position.

W1: Athletes with an impairment in all four limbs that use a wheelchair.

Open: Combines W2 and ST classes, including athletes who have an impairment in the legs and use a wheelchair or have a balance impairment and shoot standing or resting.

H2: Hand cycling. H class is for athletes competing with a hand cycle with impairments such as amputation or paralysis of the legs or motor function impairments and is subdivided into classes H1, H2, H3, H4 and H5.

T1: T class: athletes compete on a tricycle with a lack of balance and/or restriction in pedalling due to muscle tension, uncoordinated movements or involuntary movement. It is subdivided into classes T1 and T2.

Grade IV: Athletes in Grade IV have a severe impairment or deficiency of both arms or a moderate impairment of all four limbs or short stature.

Grade V: Athletes in Grade V have a mildly impaired range of movement or muscle strength or a deficiency of one limb or mild deficiency of two limbs.

Class 10: Table tennis is for athletes with an eligible physical or intellectual impairment. Classes 6-10 are for standing athletes.

Players are eligible to compete in the Open division if they have a permanent physical impairment that results in substantial loss of function in one or both legs and that meets or exceeds the sport’s minimum eligibility criteria.