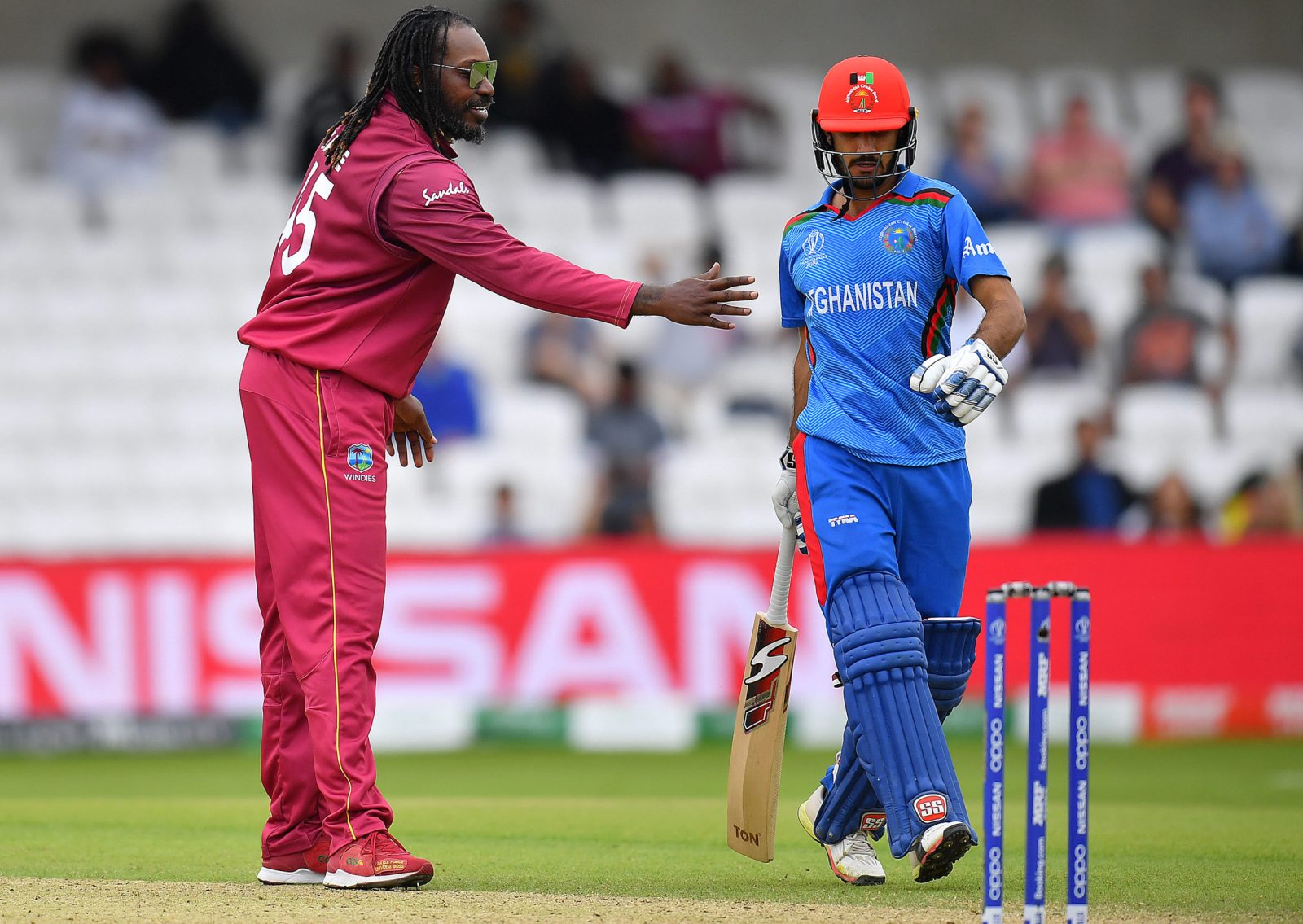 Chris Gayle of West Indies goes to shake hands with Ikram Ali Khil of Afghanistan after dismissing him during the Group Stage match of the ICC Cricket World Cup 2019 at Headingley on 4 July 2019 in Leeds, England. (Photo: Clive Mason / Getty Images)

Despite the turmoil caused by the stunning fall of the Kabul government in recent days, the Afghanistan Cricket Board has confirmed a one-day series against Pakistan will go ahead in Sri Lanka next month.

The Taliban have said they will not interfere with the Afghan men’s national cricket team, the country’s biggest sporting success of recent years, or stop the expansion of the flagship Twenty20 league, an Afghan cricket official said.

The fate of much more modest women’s cricket programmes, however, remains unclear.

Despite the turmoil caused by the stunning fall of the Kabul government in recent days, the board has confirmed a one-day series against Pakistan will go ahead in Sri Lanka next month and said it was expanding the “Shpageeza” Twenty20 league competition.

“The Taliban don’t have any issue or problem with cricket, and they have told us that we can continue our work as planned,” said Afghanistan Cricket Board head of media operations Hikmat Hassan, adding that the team was ready for three one-day matches against Pakistan next month.

“We have completed our two training camps in Kabul and we have sponsors, a production team, and even the kit ready.”

Hassan also said the team should be able to play in the Twenty20 World Cup in the United Arab Emirates in October-November.

“We are confident we will be able to take part and will be preparing for it over the coming weeks. I don’t think there will be a problem,” Hassan said.

During their previous spell in power, the hardline Islamist movement banned most public entertainments but they have never had a particular problem with cricket, a sport many Afghans learned in refugee camps in Pakistan during the 1980s and 1990s.

Since then, the game has exploded in popularity in Afghanistan. Players such as spin bowler Rashid Khan or big-hitting batsman Mohammad Nabi have become global stars of the game, lighting up Twenty20 internationals and other showpiece competitions like the Indian Premier League (IPL).

Afghanistan’s own domestic version of the IPL, the “Shpageeza Cricket League” (SCL), a competition named after the Pashto language word for a six, added two more franchises on Thursday and will be played from 10 to 25 September, the board said.

“Given the current problems in Afghanistan, it is an opportunity to bring the country together, bring some joy to the people and put on a remarkable spectacle,” Hassan said.

He said the board hoped that stars such as Rashid Khan, one of the world’s top-rated Twenty20 bowlers, would come home to play in the competition, just ahead of the World Cup.

One area that remains uncertain is the future of the women’s cricket programmes run by the ACB, which currently has 25 contracted female cricketers and several programmes for girls.

The Taliban have said that they will respect women’s rights under Islamic law, but they have not given any clear indication of how they will treat women’s sports.

In their previous spell in power, they stopped most women and girls from working or going to school and made them wear all-covering burqas to go out, and then only when accompanied by a male relative. Reuters/DM168