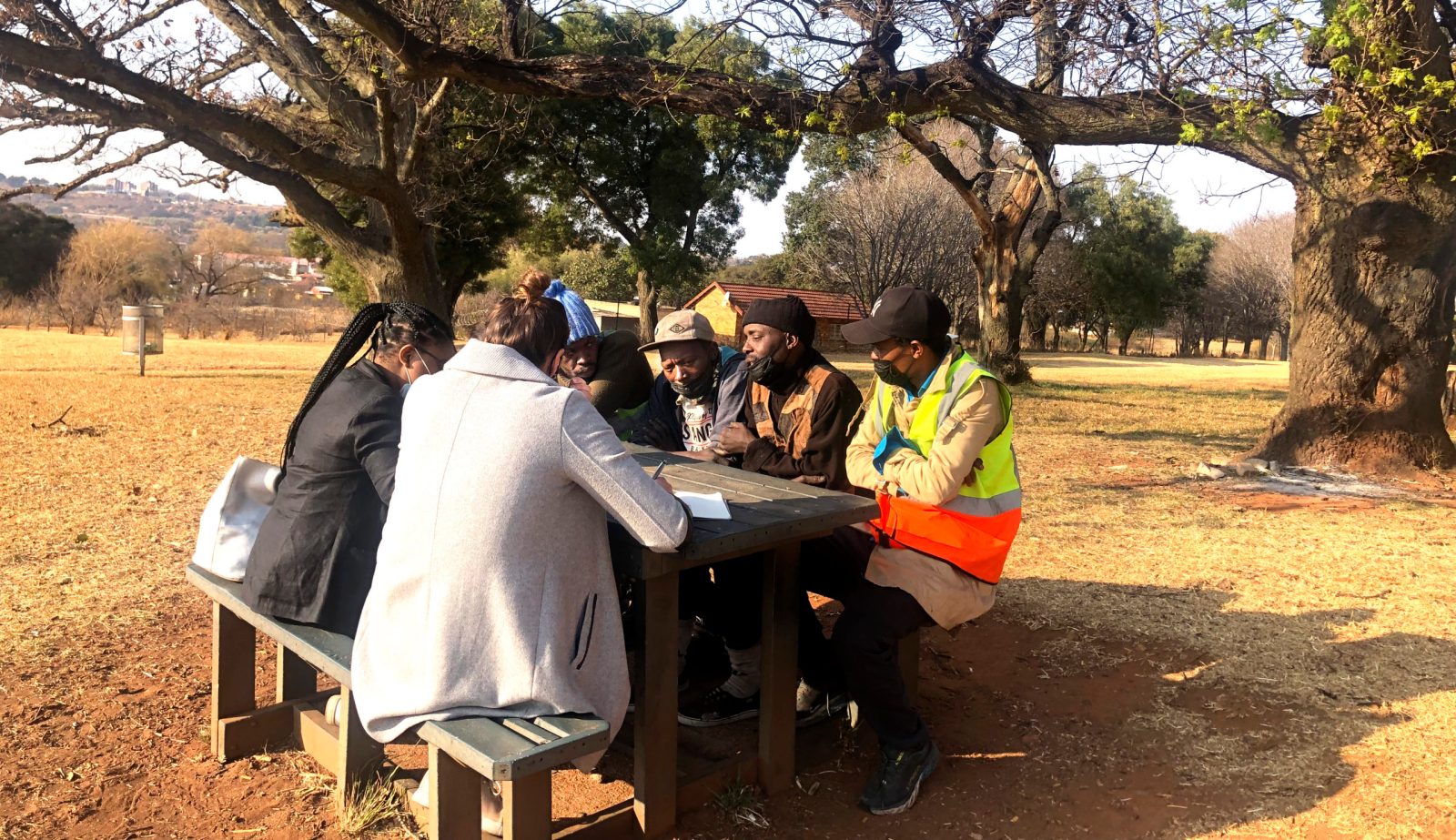 Lawyers and clients consult under a tree on Alberts Farm. (Photo: Mark Heywood)

Since 13 August 2021, four of the homeless people who have called Alberts Farm Conservancy their home for many years have been deprived of their shelter, privacy and possessions. They have been sleeping without shelter or blankets on some of the coldest nights of the winter. On Friday an equity-affirming order of the Johannesburg High Court directed authorities to rectify the situation as a matter of urgency.

In the article below, which was also reproduced via a link in Mark Heywood’s editorial of 24th August 2020, the authors referred to SCP Security, the Sixth respondent in the case, as if it were included in the Court Order to return the applicants’ possessions, as well as in the Rule Nisi regarding a final declaration of the dispossession and eviction of the Applicants as unlawful and unconstitutional. It was not. We have amended the article below accordingly. We regret this error and any impression it may have created that SCP Security acted unlawfully and was directly a party to the evictions. SCP Security participated in drafting of the settlement that was made an order of court and was at pains to make it clear that it did not participate in the eviction.

In what is potentially a decision with far-reaching consequences, the Gauteng Local Division of the High Court declared as unlawful and unconstitutional the dispossession and eviction of a group of homeless people who have for years called the Alberts Farm Conservancy in Johannesburg their home.

“By consent between the parties, with the exception of [Friends of Alberts Farm Conservancy]” the respondents are directed to “return the Applicants’ possessions, including makeshift tents and building materials, wood, clothing, shoes, food, mobile phones, and waste for recycling, and any other items which were removed, as soon as possible,” said Acting Judge Stuart Wilson in the order.

Should they be unable to return these possessions, the court ordered that the respondents — among them the City of Johannesburg Municipality, Johannesburg City Parks and Zoo, Chief of Police of the Johannesburg Metropolitan Police and Pikitup — are to “provide building materials, and blankets, bedding, and mattresses… as soon as possible, but by no later than Saturday, 21 August 2021” which would enable the construction of “at least equivalent temporary habitable dwellings to those that were destroyed and/or removed at the site in the Alberts Farm Conservancy at which their previous shelters were demolished”.

Moreover, the court ordered that the homeless people “have full and unimpeded access to their temporary habitable dwellings and possessions, with immediate effect, by granting 24-hour access to, at least, one of the six gates of the Alberts Farm Conservancy, which gate or gates should be the closest gate or gates to their temporary habitable dwellings.”

Alberts Farm Conservancy, a biodiverse oasis of gently sloped land in Johannesburg’s western suburbs, is described as an “ecologically significant area” with a high diversity of indigenous grass and shrub species, several dams, a wetland, a marsh as well as the only artesian spring in Gauteng. Lying against the Northcliff ridge, it is the second-largest green lung in Johannesburg.

Daily Maverick previously reported that the Alberts Farm Conservancy with its history dating back to the 19th century has had a large metal fence erected for three kilometres around its perimeter.

Friends of Alberts Farm Conservancy, cited as a respondent in the proceedings but who did not respond to court papers or answer attempts to contact them, have previously said in a change.org petition that “due to ongoing bylaw violations, including endangering/harming indigenous fauna and flora, lighting fires, polluting the water from the only natural spring in Johannesburg, erecting shelters, and constant noise from drumming and chanting, the integrity of the park’s wildlife and the safety of people visiting the park for recreational activities are under serious threat”.

Oscar T, “father of the homeless people” of Alberts Farm Conservancy,  previously told Daily Maverick how he moved to the conservancy from being a car guard at Emmarentia Dam in 2005. When he first arrived the park was neglected and there was “poo all over”. He said that when asked who had employed him he told local residents he was “doing it for charity”. That was the beginning of a constructive relationship where sometimes he and  Thamsanqa Matthew Tomodi, one of the four applicants, would be paid R50 for their help in cleaning the park.

But the fence has soured relations and sown distrust. “When there was no fence they used to greet us like human beings,” said Tomodi.

“The fencing is not targeted at exclusion of the homeless people who live within the park and is not designed to trigger any evictions. Homeless people continue to live in many of the city’s fenced parks. Any operations which JCPZ or JMPD may conduct as part of their normal by-law enforcement functions in the city’s many public open spaces, would be entirely separate and not due to the fencing.”

The homeless people who for years have found refuge in the park, however, disagreed.

In Friday’s ultimately successful urgent application, Tomodi and his fellow applicants asked for the court to hand down an order that “the dispossession of the Applicants’ temporary habitable dwellings and possessions and their eviction by the Respondents on or about 13 August 20 at or around the Alberts Farm Conservancy… is unlawful in terms of section 26(3) of the Constitution”.

That section of the Constitution states that “no one may be evicted from their home, or have their home demolished, without an order of court made after considering all the relevant circumstances. No legislation may permit arbitrary evictions.”

In the papers, Tomodi — an adult male working as a self-described “waste reclaimer” who has resided at Alberts Farm Conservancy over the past three years — alleged impropriety on the part of authorities and residents of the neighbouring suburbs.

“On or around 13 August 2021, one Ms Gratz-Lawlor, who I am advised is a resident of the area and who as far as I know represents the Friends of Alberts Farm Conservancy, visited the Farm. Ms Gratz-Lawlor was accompanied by one Ms Marianne Coetzee, and [people] who I believe to be representatives of the City, the Metropolitan Police Department, Johannesburg City Parks and Zoo, SCP Security, and Pikitup.”

“Upon their arrival, Ms Gratz-Lawlor and Ms Coetzee asked… Mr Solomon Tjia to summon me to speak about employment opportunities of some sort. It was during this conversation that the persons accompanying Ms Gratz-Lawlor and Ms Coetzee, including representatives of the City, the JMPD, JCPZ, SCP Security, and Pikitup, started to destroy our temporary habitable shelters, including our makeshift tents, and dispossess us of our possessions, including wood, clothing, shoes, food, my mobile phone, and waste for recycling. The[y] … did not produce a court order or explain their actions,” he alleged in his affidavit supporting the application.

Tomodi went on to explain that “since 13 August 2021, we have had no alternative accommodation — which would enable us to continue our work as waste reclaimers — and we are currently sleeping outside on the farm in the cold of winter. We have also not been offered any temporary emergency accommodation by the City, and our possessions have not been returned to us. Our current situation is dire, and we feel demeaned and degraded by the conduct of the Respondents who have treated us in an undignified manner.”

That allegation has now been ventilated in court and the City of Johannesburg, Friends of Alberts Farm Conservancy and others have been found wanting. Significantly they have also all been “directed to meaningfully engage with each other to ensure that an equitable relationship and dignified relationship can be developed between the parties”.

This case was only about the unlawful demolition of the shelters of four men. But it has far broader ramifications for potentially hundreds of people who sleep in parks and open spaces in Johannesburg because they are homeless or because it places them closer to economic opportunity as reclaimers, car guards or from piece jobs. DM