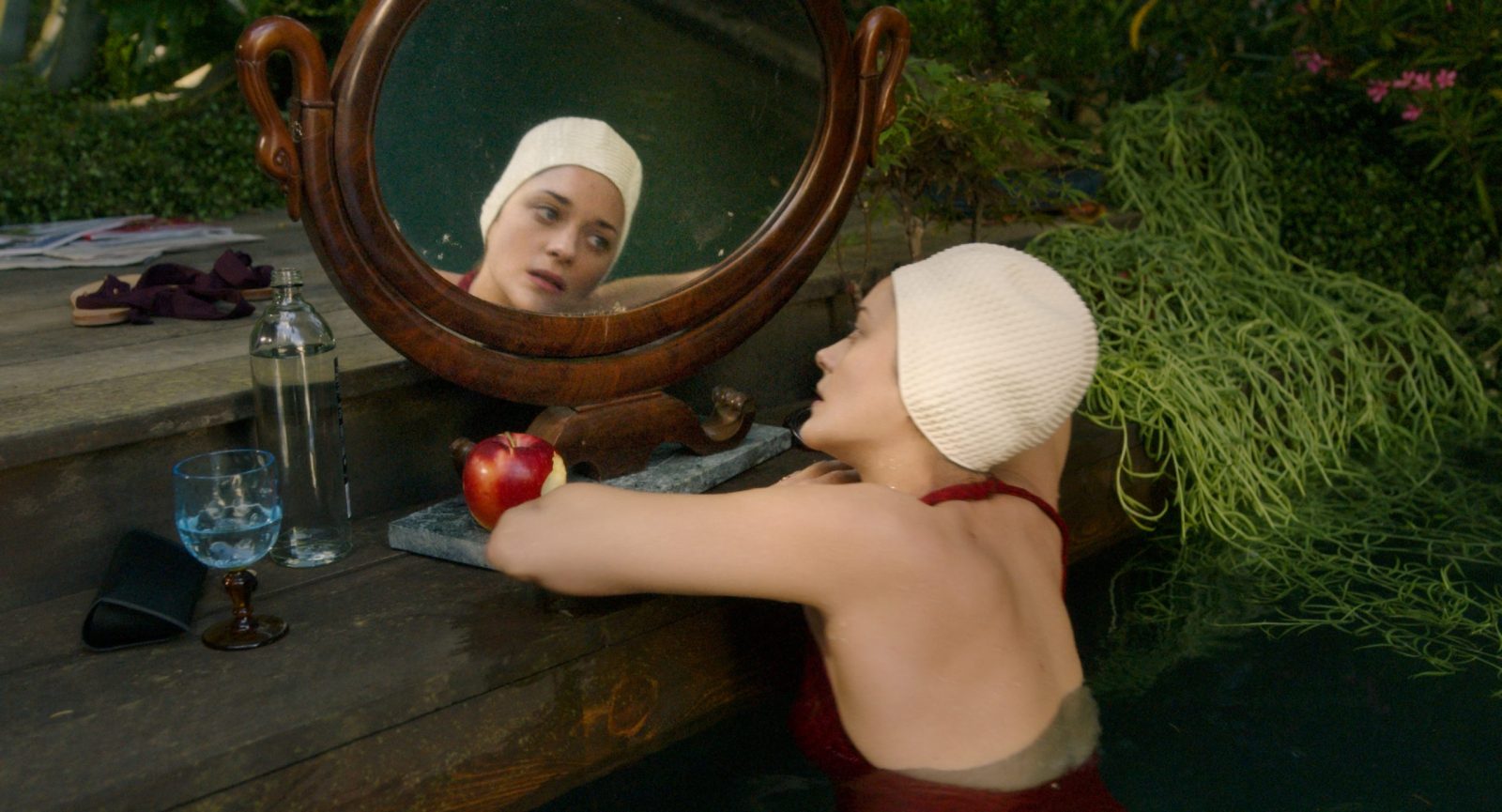 ‘Annette’ is a risky, multi-layered film with a powerful leading cast that dependably divides audiences. It’s nothing if not different.

Annette, the opening film of Cannes 2021, set the festival off with a slice (right down the middle of every audience that watched it). Many viewers reportedly left the cinema halfway through screenings, unable to tolerate the heat for a moment more of such madness, while those left behind gave enthusiastic standing ovations.

Even a brief description of the film conveys what is so polarising about it: Annette is a 140 minute modern fantasy rock-opera melodrama starring Adam Driver, Marion Cotillard and a puppet, directed by Leos Carax, with a screenplay by pop duo Sparks. That is a hell of a lot of moving parts.

Annette was released to the public on Amazon Prime on August 20, and even with Driver in the front seat and Cotillard riding shotgun; even after Carax took home the Cannes award for best director, viewers at home don’t know what to think and whether to watch it. Who could blame them?

Despite the unpredictable nature of the film in general, the plot is pretty straightforward. Henry McHenry (Adam Driver) is a narcissistic bad-boy stand-up comedian who’s madly in love with the gorgeous Ann Defrasnoux, (Marion Cotillard), an operatic soprano. As Ann’s career soars ever higher, Henry begins to self-destruct, and the drama of their mismatched success has the paparazzi salivating. Amidst this building tension comes Annette, their strangely gifted child, played by … a mechanical puppet.

Actually it’s a series of puppets, each stranger than the last. Rather than opt for realistic ones Carax actually draws your attention to their artificiality. One of them has shiny wide-open eyes; another has large protruding ears; and their joints are left visible. The puppet does serve a metaphorical purpose beyond obscurity, but it’s only revealed at the story’s close.

Carax is an antirealist. He likes his fourth wall cracked, but not broken. Before the film fades from black he begins with a cheeky narrated disclaimer urging the audience to prepare themselves for the epic show “…breathing will not be tolerated during the show [canned laughter]”. It’s not as edgy as he thinks it is but it does help to set the absurdist tone he prefers.

Carax makes sure that you never get so lost in the film that you forget it’s a film, and he also makes sure that you never forget about him. Indeed he’s the first thing you see. He’s sitting in an LA recording studio with his daughter, Ron and Russel Mael of Sparks, and the film’s sound engineers. “Would you like to start?” he asks. At first it seems as though he’s speaking to the cast and crew, but when they start singing an overture at the camera, repeating the same refrain, one realises that they’re singing at you, the audience.

Carax has wised-up to a trick of human psychology: it takes two to be awkward. If one party doesn’t engage in awkwardness, the other usually accepts that there’s nothing to be uncomfortable about, and the tension begins dissipating. This is how he shrewdly presents the musical genre of Annette to the mainstream.

Some viewers find it excruciatingly childish and unrealistic when characters cheerfully burst into song without explanation. Carax attempts to sidestep that anxiety with sheer nerve. He and his cast are so self-assured that people who cringe and bristle with embarrassment in most musicals may feel comfortable (even if they aren’t amused).

Furthermore, those jarring moments of bursting into song are kept to a minimum because the characters simply keep singing. This makes it impossible to take things seriously – a lot of the time they’re just singing for the sake of singing – but it also leaves the expressionistic benefits of song as a medium without the awkwardness of having to straddle the severity of reality and the goofiness of musical performance.

Most of the music is nauseating. It’s not always clear whether it’s mocking or not. It’s not as awkward as it is insane. For such a poetically bold film, the music itself is markedly prosaic. The gimmick of literal (often unrhyming) lyrics and farcical melodrama wears off pretty quickly.

The most musically pleasing song in the film is Henry and Ann’s theme: We Love Each Other So Much, a title so obnoxiously direct that it foreshadows the irony and tragedy of their love. They sing it as they meander through the woods, as they drive through the night, even while they have passionate sex. But the grace of their romance is bait luring you towards a looming darkness personified disturbingly by Adam Driver.

Whether it’s as Kylo Ren in the Star Wars franchise or Charlie in A Marriage Story, Driver thrives on ambiguous antihero space. The thrill of watching Henry, his character in Annette, is discerning whether he’s a pitiable broken man, a depraved monster, or both.

Henry’s stand-up bits are the longest unsung moments in the film. His performances are dreadful but the audiences lap it up, even as he insults and provokes them “why should I make you laugh?”. If you relate to his subversive stand-up, you probably shouldn’t be watching the film, reading this review, or be allowed outside without parental supervision. He takes cheap shots that are neither clever nor funny, and he’s an aggressive ass, but his fans love him for it.

His shows take audience participation to a new level. The audience sings in rehearsed unison almost as much as he does. They’re a part of the show, because, of course, there is no show – the show is for you, and the function of the audience is not just to swoon over Henry’s grotesque self-loathing drivel, but to create a dialogue between audience and artist on the nature of art. Carax does this in an apparently hostile way, depicting the audience as a conglomerate of homogenous insatiable chumps.

People are willing to forgive the most horrific things for the sake of satire. Sometimes vulgarity is even encouraged. But if it’s revealed that an offensive work of comedic art was never a joke we are forced to consider whether we should have been indulging it at all. A choral song late in Annette goes, “but it isn’t clear – is this something we should cheer? Is it something we should fear?”

A good example from the real world is Eminem, who satirised violent psychopathic behaviour and aggressive macho rap culture, while certainly capitalising on it. When that grey space got too dark for the media to tolerate, he had to backtrack in some of his songs and partially shed his violent on-stage persona.

In Sing For The Moment he wrote:

“It’s all political, if my music is literal and I’m a criminal, how the fuck can I raise a little girl?

To what extent does Henry’s on-stage toxic masculinity represent him as a person? And is Carax guilty of the same sin as his protagonist? It’s up for debate. It’s so intellectual and meta in questioning how intellectual and meta it is. Or is it? Who knows. Figuring out how deep the layers do or don’t go is as exciting as it is exhausting.

And where is Ann during all this? Disappointingly, the charismatic Cotillard is relegated to little more than an ephemeral symbolic presence of sex and beauty rather than an agent of anything in particular, much like Mal, her character in Inception. She is viewed from afar, idealised, idolised, and dehumanised, but at least this seems to have been a conscious decision, conveying Henry’s entitled perception of her as an object of desire, rather than Carax’s biases as a director.

So what now? Should you watch it? Impossible to say.

If you’re a movie buff you may be infuriated by the lack of continuity and editing – it’s a disjointed film and it’s way too long. On the other hand, Carax uses enough risky devices (like overlaid projection) and visual symbolism to last film school lecturers a short lifetime.

If you’re the kind of easy-going viewer who kicks back with a drink or a puff, you may get completely lost and find yourself wondering what it’s even about. However you’re just as likely to be blown away by the outrageous otherworldly visuals.

Intellectuals might be stimulated by the layered satirical meta-commentary or feel the film relies on perceived cleverness to compensate for confusion surrounding what anything actually means.

Annette is paradoxical in several ways. It’s a self-critical work of art that questions the role of art itself; it’s engrossing without being entertaining; and it’s a completely unrealistic fantasy that somehow distills genuine truths.

One day Annette will make a great theatre production. In the meantime, we’ll keep wondering whether it’s genius or simply deranged drama dressed in layers of complexity. DM/ ML

Annette is available on Amazon Prime Video.
You can contact This Weekend We’re Watching via [email protected]