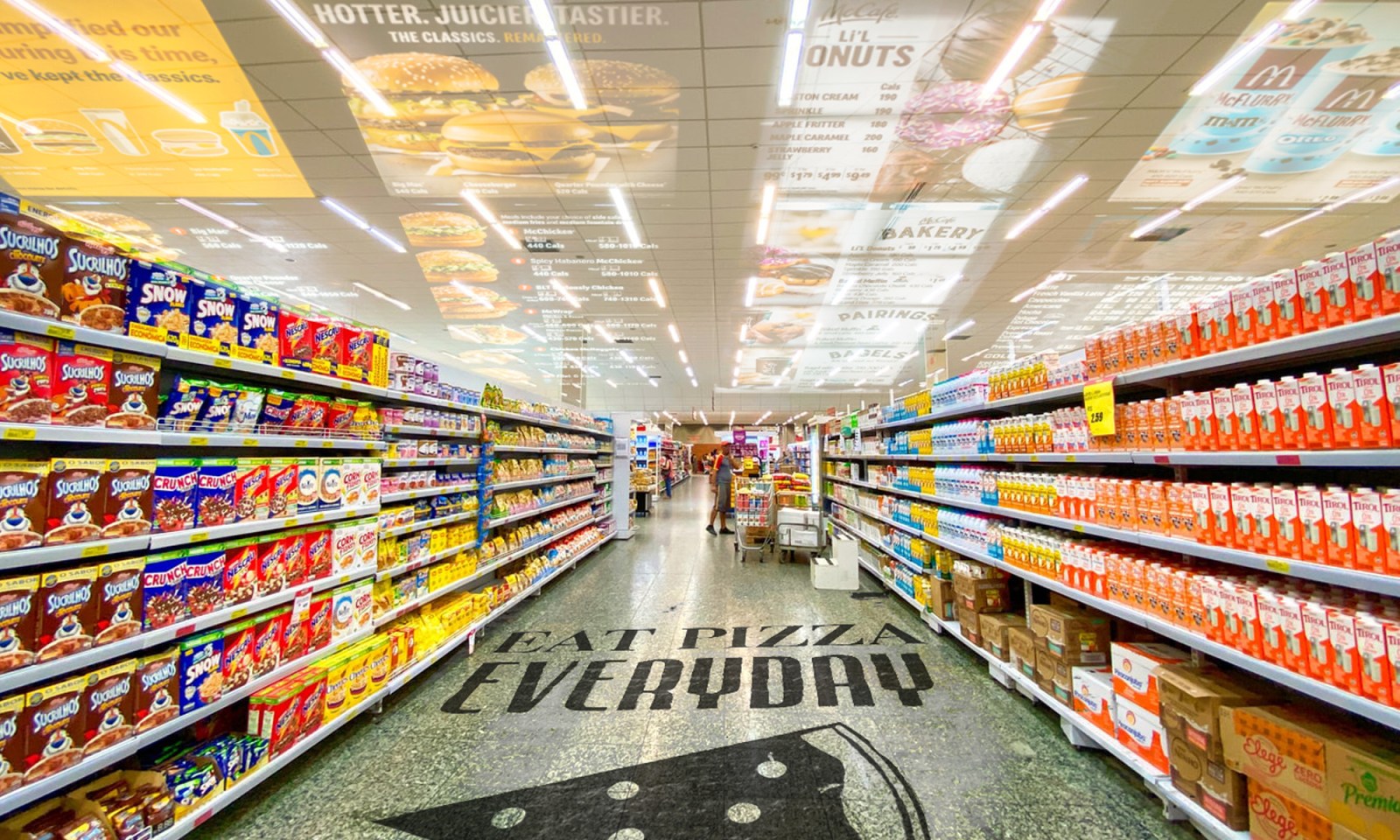 The closer South Africans live to supermarket and fast-food joints, the more likely we are to be overweight or obese, a study has found.

The rapid rise of supermarkets in Kenya has not only helped improve food security, it has also had a significantly positive impact on child nutrition, leading to an increase in child height, and to lesser degree, an increase in weight, according to a study conducted from 2012 to 2015: “Supermarket purchases also increase child weight-for-age Z-scores, but the effects on height are larger than the effects on weight. Supermarkets do not seem to be a driver of child obesity in the region,” the researchers concluded.

“The positive effects on child height are particularly welcome, as child stunting is still widespread and a major health problem in developing countries… Our data show that dietary diversity is higher in households with supermarket purchases than in households that obtain all their foods from traditional sources.”

They do make it clear that the study was strictly focused on children between the ages of five and 18, and do not claim to have collected any data on adults. In fact, drawing on studies from other researchers, they remark: “That supermarkets contribute to rising obesity in adults but not in children is interesting and plausible.”

While supermarkets offer a diverse selection of the typically recommended healthy foods such vegetables and grains, they also expose communities to many processed foods that are largely viewed as unhealthy. And taking this into consideration, as well as the need for more long-term research, they note that “the nutritional effects of supermarkets will obviously depend on the initial dietary and nutrition situation and the types of dietary shifts that occur… In the medium-sized towns in Kenya, many of the households are still moderately poor, and traditional diets are not highly diversified. In this context, the greater variety of foods offered by supermarkets at affordable prices can improve diets and nutrient intakes, even when most of the products purchased in supermarkets are in processed form.”

The kids are all right, but the adults…

A more recent study, published in 2021, shifts the lens to South African adults; in addition to the effects of the ubiquity of supermarkets, they also looked at the proliferation of fast-food outlets.

Based on body mass index (BMI), among South African adults 68% of women and 31% of men are either overweight or obese, according to the South Africa Demographic and Health Survey conducted by Statistics South Africa and the South African Medical Research Council in 2016. The Western Cape in particular had the highest percentage, 73% and 44% for women and men respectively.

Among other factors, the prevalence of obesity as well as the dearth of data connecting proximity to “Big Food” retailers and fast-food restaurants, led the researchers to conduct their study, “Using Google data to measure the role of Big Food and fast food in South Africa’s obesity epidemic”.

The team used Google data to “to identify the location of supermarkets and fast-food restaurants in the entire country of South Africa”, including “all Big Food retailers belonging to any of the well-known national or international retail chains operating in South Africa (e.g. Shoprite, Checkers, Pick n Pay, Spar, Woolworths). Similarly, fast-food restaurants are defined here as outlets belonging to any of the well-known fast-food chains”.

They checked the data against the number of outlets listed on each company’s website, and also made sure to remove branches that didn’t sell food, such as Pick n Pay Liquor or Spar Tops. They were left with about 5,909 supermarkets and 4,450 fast-food outlets, from which they collected the data. To work out the connection between the location data and the health effects on adult South Africans, they used data from the South African National Income Dynamics Study (NIDS), a project that has been surveying a “nationally representative sample of over 28,000 individuals in 7,300 households across the country” from 2008 to 2017, recording, among other things, their health and nutritional status, including weight, waist circumference and height.

They found that “each kilometre of additional distance between the household and supermarkets or fast-food outlets decreases BMI by 0.014 kg/m2 [..] and also significantly reduces the probability of overweight and obesity [..] In other words, closer proximity and thus better access to supermarkets and fast-food restaurants increases BMI and the probability of being overweight and obesity.”

Furthermore, they looked at the data based on 10km intervals, and after establishing a 56% probability of being overweight or obese when living within 10km of a fast-food outlet or supermarket, “the probability decreases by around 1.2 percentage points for every additional 10km of additional distance”. They also noted with surprise that higher levels of education did not necessarily result in a reversal of the trend; as they put it, “better-educated people are expected to be more knowledgeable about healthy nutrition and therefore less affected by overweight and obesity… This result may indicate that overweight and obesity are not yet widely perceived as unhealthy conditions in the local context.”

That the overconsumption of processed food and fast food poses a health risk is not exactly the stuff of breaking news. It has been reported on widely, be it the health risks that come with the consumption of foods high in sugar or certain kinds of fats, or listicles highlighting the most calorie-dense fast-food meals in the country.

Such has been the ubiquity of the coverage that a whole health food industry has been built on the back of it.

For instance, the growth of organic foods and non-GMO foods sectors, and “healthy” fast-food outlets. Then there are the purveyors of some of the world’s most calorie-dense burgers who have added items to their menus that are marketed as healthier; such as Burger King’s Whopper burger makeover. According to the company’s website, “now more than ever” Burger King believes that “real food tastes better”; so they’ve removed “all colours, flavours and preservatives from artificial sources… No MSG. No high-fructose corn syrup. No nonsense.” However, a fair amount of calories remain. At the heavy end, customers who go for the Triple Whopper with cheese are guaranteed an intake of 1,103 calories for the burger alone, without a side of chips or a beverage.

While the authors of the aforementioned study did not seek to research the already established health risks associated with fast food and processed food from supermarkets, they do draw on previous studies, and state: “Populations in developing countries do not only face a broad spectrum of health risks from undernutrition and infectious diseases, but they are increasingly also affected by many non-communicable diseases (NCDs) more commonly associated with high-income countries. In fact, over the last 20 years the burden of NCDs has increased over-proportionally in developing countries, while levels of obesity have almost converged to those observed in high-income countries.

“Major factors associated with this rising prevalence of obesity in developing countries include urbanisation, an ongoing nutrition transition, the greater affordability and accessibility of highly processed or otherwise unhealthy foods… Since 2006, nearly all sales growth in global Big Food has been concentrated in developing countries. Similarly, the consumption of soft drinks, snacks and other highly processed foods has grown over-proportionally in low- and middle-income countries.”

That is not to say that they view the proliferation of fast-food outlets and supermarkets as the main causes of obesity. In fact, they “conclude that Big Food and fast food are not necessarily the main drivers of the obesity epidemic in South Africa, but they likely contribute to the problem. Our results from South Africa are consistent with earlier research in other countries of Africa showing that modern retailers contribute to higher consumption of processed and energy-dense foods.”

Of particular relevance to South Africa and other low- to middle-income countries, they note that “better understanding the links between modernising food systems and health outcomes is crucial to ensure that the gains from economic development are not eroded through a deterioration of public health and life expectancy”.

They stress the importance of implementing the findings from the growing body of research when writing policy: “While banning modern retailers would be inappropriate, regulating food environments in such a way that consumers find it easier to make more healthy food choices should be possible.

“Studies from different countries demonstrate that interventions such as taxes, subsidies, changes of in-store placements of healthy and less-healthy foods, and regulation of information and advertisement campaigns can influence consumer food choices significantly.” DM/ML