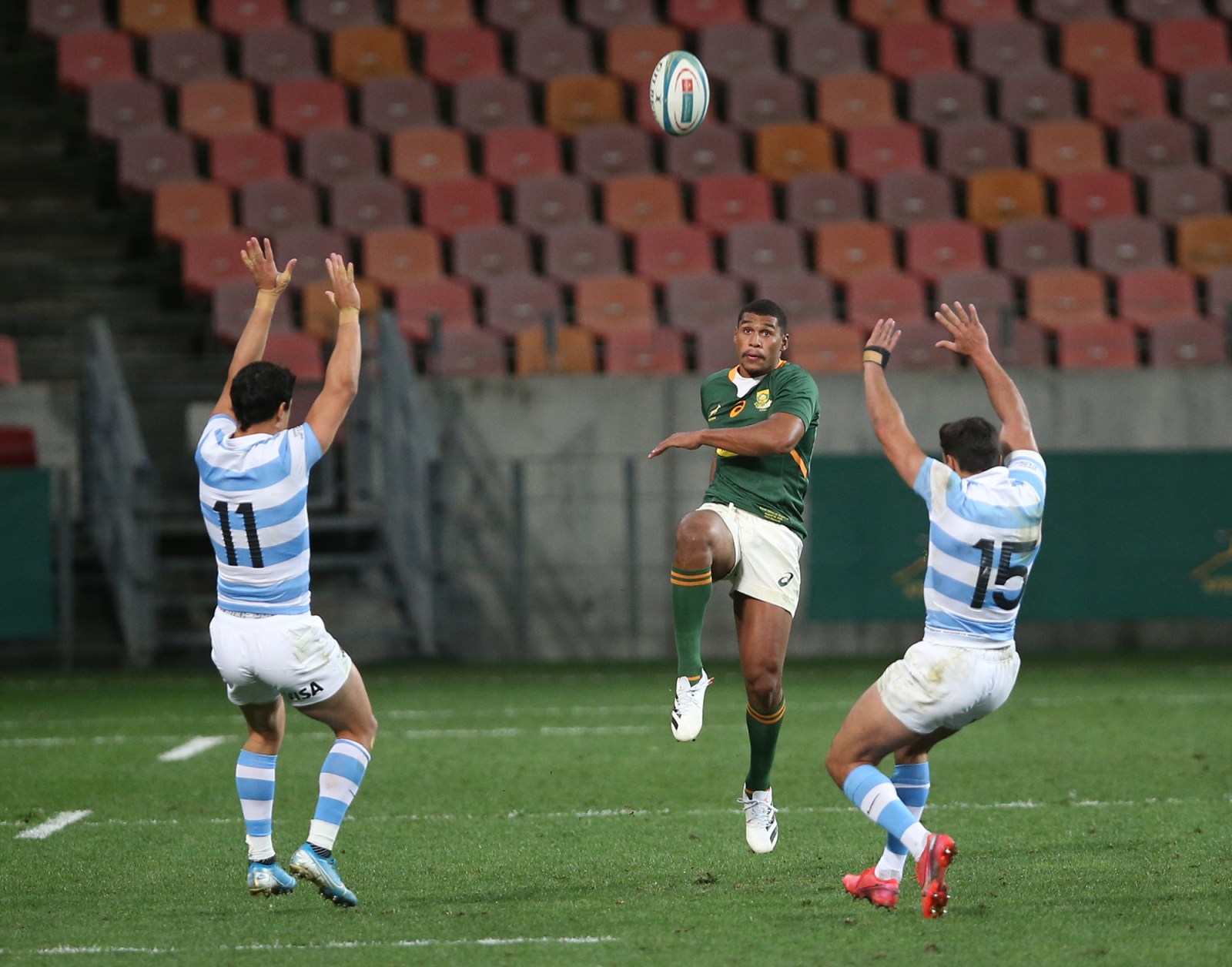 The Springboks and Pumas meet in round two of a Rugby Championship tournament that, as of Friday afternoon, might not continue after they clash at the Nelson Mandela Bay Stadium on 21 August.

Rugby players are used to adversity and setbacks. It’s the nature of the sport. But even by the tough standards they are accustomed to this has been a stressful year and, more recently, a highly stressful period for the Boks.

The world champions and Argentina meet in Gqeberha for the second time in seven days on Saturday, following last week’s 32-12 win for the Boks. It’s the second of what is supposed to be six fixtures in the Rugby Championship for both teams.

The Boks are well placed after securing a bonus-point win last week, and coach Jacques Nienaber has selected close to his most powerful lineup for the return clash against the Pumas.

The theory was that the Boks win this match and then head to Australia to face the Wallabies and All Blacks, in prime position to defend the Rugby Championship title they won in 2019. That’s the theory. The reality is that the tournament might not stretch beyond this weekend.

New Zealand Rugby (NZR) unilaterally withdrew the All Blacks from honouring their fixture against the Wallabies in Perth next week over Covid-19 restrictions. The All Blacks would have had to quarantine for 14 days and they refused.

The action has thrown the entire future of the 2021 Rugby Championship into turmoil because it has a massive knock-on effect. As a consequence, Rugby Australia (RA) and SA Rugby have been at the forefront of trying to find solutions for saving the tournament. NZR has taken an insular view, creating more problems.

This is the backdrop against which the Boks and Pumas have had to prepare for a big Test. Both sets of squads were scheduled to fly out of Gqeberha on Sunday on a chartered plane.

“We’re just grateful to have the opportunity to play, it’s something we really appreciate after all the challenges that have had to be overcome,” Bok assistant coach Mzwandile Stick said.

“Yes, it would be nice to stay and play in South Africa, but we are game for anything, and up for any challenge. But the main focus right now as a team is to just keep ticking the correct boxes on Saturday. Then we’ll wait to see what the calls from the top are, and we will support any decision.

“If you look at our facilities, there are so many outstanding stadiums capable of hosting the big events. We’ve got everything that could be needed to host such a tournament and, of course, it would be unfortunate if there are no supporters, but we are living in challenging times. We’d warmly welcome anyone who came here. I think we’ve got what it takes if it comes to that.”

Originally the Boks’ next destination was Perth, but because of changes to Covid restrictions in Western Australia, that flight plan has been scrapped. As it stands now the Boks and Pumas are going nowhere on Sunday while the suits try to find a solution.

“Sanzaar announced overnight that the latest outbreaks of Covid-19 in Australia and New Zealand had caused massive disruption to the match schedule for the tournament following the tightening of regulations placed on travel and quarantine by various state and national governments,” an SA Rugby statement read.

“NZR announced that the planned matches against the Springboks in Auckland and Dunedin at the end of next month had been cancelled. And then, without informing their Sanzaar partners, unilaterally issued a media release announcing they would not fly their team to Perth as scheduled for a planned match against the Wallabies.”

While players were trying to stay focused on rugby, their livelihoods were being put in jeopardy by officials — in this case specifically NZR officials.

Under these exceptional circumstances, SA Rugby has offered to host the remaining Rugby Championship fixtures after this weekend, in bio-secure environments in South Africa. It’s one option under discussion as solutions are sought to save the 2021 edition of the tournament.

“We have advised Sanzaar that we are ready and able to host the remainder of the competition in South Africa, pending our government’s approval,” SA Rugby chief executive Jurie Roux said.

“But we are now well-versed in turning on rugby Tests within the prevailing Covid-19 restrictions and have the venues and accommodation necessary. We just need the go-ahead.”

More of the same for Boks on the field

On the field, Nienaber made 11 changes to his team from the side that won the first Test against the Pumas, while Pumas coach Mario Ledesma has also shuffled his squad.

The Boks have won four of their five Tests this year and are desperate to maintain their momentum, although they might be forced into another Test rugby hiatus if the Rugby Championship situation cannot be resolved.

Nienaber has recalled the entire backline that won the third Test against the British & Irish Lions after missing last week’s Test, indicating that there is no taking the Pumas lightly.

Wings Cheslin Kolbe and Makazole Mapimpi will be expecting to see a little more ball than in the claustrophobic Lions series while Handre Pollard returns to flyhalf. But any thoughts that the Boks will suddenly throw off the shackles though, were quickly quelled by Pollard.

“At the moment, we are doing pretty well, so for now, if it’s not broken, there’s no need to fix it. We’ll just keep doing what we are doing and people can criticise as much as they want. We believe in it, and that’s the only thing that matters.”

The Pumas will no doubt like to see the game open up a bit more. Last week they struggled to cope with the Boks’ kicking game where their wings were constantly exposed under the high ball.

Ledesma has dropped wing Bautista Delguy and brought in Olympic Sevens bronze medalist Ignacio Mendy, who is set to make his Test debut. It’s been quite a month for Mendy who helped six-man Argentina beat South Africa at the Tokyo 2020 Rugby sevens quarterfinals.

“We didn’t execute well last weekend because we were under pressure from the South African defence,” Ledesma said. “But I think we can do things better if we implement what we train in the week.”

Ledesma has also named a new halfback pair in Gonzalo Bertranou and flyhalf Domingo Miotti, with the hope that they might offer slightly more control.

“Miotti has always been entering at the end of games, but we are working with him. He raised his hand and it’s part of what we talked about in terms of training players for France 2023.”

The Boks go into the match with Eben Etzebeth, who has been sensational this season. How much they will miss his physical presence will be one of the key subplots to the match. Marvin Orie though, making his first start, has a chance to show that he is a worthy understudy to Etzebeth with uncapped lock Nicolaas Janse van Rensburg waiting for a debut from the bench. DM