North West Premier Job Mokgoro digs his heels in while... 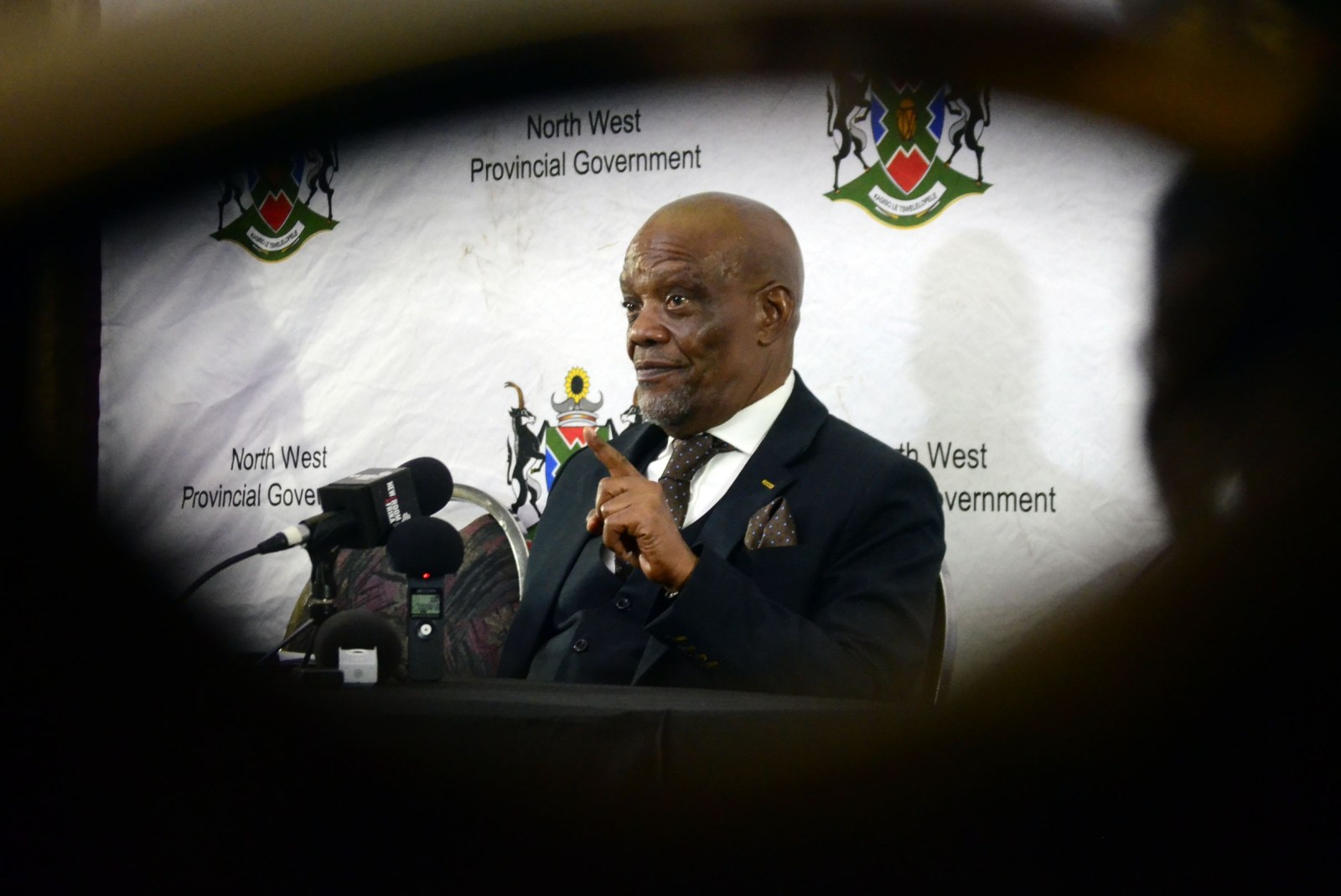 North West Premier Job Mokgoro has been reluctant to let go, even as the party has been pushing him so that Bushy Maape can be sworn in by the weekend in his stead.

When Job Mokgoro became premier of the troubled North West province in June 2018, it was on the back of fierce protests and looting of businesses and properties in Mahikeng against the outgoing premier, Supra Mahumapelo.

Now there are protests again, and supporters of Mahumapelo are said to have joined in, but this time it’s against attempts to get Mokgoro to resign. “It’s a coup d’état, a power grab,” a supporter of Mokgoro said.

Mahumapelo, incidentally, this week again appeared before the ANC’s National Disciplinary Committee of Appeal to fight his suspension by the province in April. This was for convening parallel rallies aimed at disuniting the party in the province, but the committee ruled that the province did not properly examine his five-year suspension from the party and is now hearing his case.

Mahumapelo did not want to comment on either the protests or the progress of the disciplinary process. Mokgoro, in a phone call with ANC Deputy Secretary-General Jessie Duarte, reportedly agreed to step down, but also wanted to meet President Cyril Ramaphosa over several issues.

It’s not clear if or when this meeting will take place.

ANC interim provincial committee (IPC) chairperson Hlomane Chauke said on Tuesday that the province hoped to swear in Bushy Maape — who worked as adviser to Mokgoro — by the end of the week.

Maape was selected by members of the ANC’s top six after interviews and a selection process this week.

Chauke said the ANC had to look again at Mokgoro’s deployment, “because once you begin to have challenges, you cannot sit back and say they will solve themselves. You have to intervene. I think this intervention came at the right time. His skills can be used somewhere else but not at this level. He will have to be redeployed by the party somewhere else.” It is not clear where this will be. Mokgoro himself has indicated that he wants to retire.

Chauke mentioned several issues against Mokgoro, including a “rogue [intelligence] unit” to keep tabs on others in the party, the state of municipalities in the province (“our people don’t have water, no roads, no housing”) and the fact that “ordinary” local businesspeople “aren’t benefiting from whatever [tender] is coming out”.

Whether Mokgoro is the only premier who should be axed for the failings of municipalities is debatable, but it’s not clear why he should bear responsibility for tenders. Political heads are not supposed to get involved in tenders.

Mokgoro’s replacement comes seven months before the ANC in the province is set to go to an elective conference, and some have questioned the timing. A source sympathetic to Mokgoro said Maape was being used by a faction controlled by Chauke to access government resources to campaign ahead of this conference.

“They don’t have resources to even steal a conference,” the source said. “Supra’s people are showing them flames. He knows how to work the branches.”

This might explain Mokgoro’s resistance to a resignation, which seems out of tune with his initial reluctance to serve in his current position. The ANC in the province has for months been trying to get rid of him.

Chauke, however, said Mokgoro’s replacement “has got nothing to do with the provincial conference”. The outcome of this conference would also not affect Maape’s appointment, as “the ANC now has a new way of dealing with deployment”.

Until recently the ANC had a rule that the province would submit three names to the party’s National Executive Committee, from which one would be appointed. Preference was usually given to the chairperson of the province, but other aspects, such as gender, were also taken into account. However, former president Thabo Mbeki told a party meeting in the Eastern Cape that the arrangement of appointing provincial chairs as premiers, brought in under former president Jacob Zuma, had resulted in some bad choices. He mentioned former Free State premier and suspended ANC Secretary-General Ace Magashule as an example.

Now the selection process has an added element of intense scrutiny of the candidate’s qualifications and of how well they interview.

“These three comrades [candidates for succeeding Mokgoro] have gone through intense interviews,” Chauke said. “It is the first time that the ANC talks about the qualifications of cadres. We must deploy skills and highly educated comrades at the same time.”

Maape, a former Robben Island prisoner, was the most well qualified of the three candidates for the job, with a BA in psychology and economics from Unisa (completed while he was in prison), and a BA (Hons) in developmental studies and a BA (Hons) in economics from the University of the Western Cape. He is currently studying political development and economics at the University of the Witwatersrand.

“With his valuable experience both within the movement and academic expertise, comrade Maape will pursue the objectives of the ANC by improving the lives of the people of the North West,” Chauke said. Maape is said to have the backing of ANC MP China Dodovu, another big role-player in North West. The other candidates were legislature speaker Susan Dantjie and Finance MEC Motlalepula Rosho.

The 73-year-old Mokgoro is himself a veteran academic and served for a decade from 1994 as the province’s first director-general, under then-premier Popo Molefe. He holds a master’s and has an honorary doctorate in public administration from the University of Toledo and served with the University of Bophuthatswana for 10 years before becoming a senior lecturer at the University of the Western Cape.

The DA has called him a “ceremonial premier” because the province has been under administration for the past three years and Mokgoro hasn’t wielded as much power as he might have liked to.

Non-performance of municipalities got worse under Mokgoro’s administration, News24 journalist Juniour Khumalo wrote. The Auditor-General’s damning reports into North West municipalities showed that during Mahumapelo’s last year in office, in 2017/18, irregular expenditure by municipalities in the province was R3.7-billion, and by 2020, under Mokgoro, this had increased to R17.8-billion.

There is also unhappiness with the way Mokgoro had defied instructions from Luthuli House to vote with opposition parties in the provincial legislature to fill the Chair of Chairs position. Mokgoro also refused to take instructions from the IPC about appointments, although his sympathisers, in turn, have accused the IPC of interference with government affairs while their original task was to fix party structures and organise a conference by March 2020.

The IPC itself is made up of members of both factions, which will have to issue coherent instructions to the government to govern for the next seven months. The replacement of a premier so soon before the local government elections (which are set for October but could be postponed to February) is a risky move, although ANC support in the province has thus far remained strong. DM