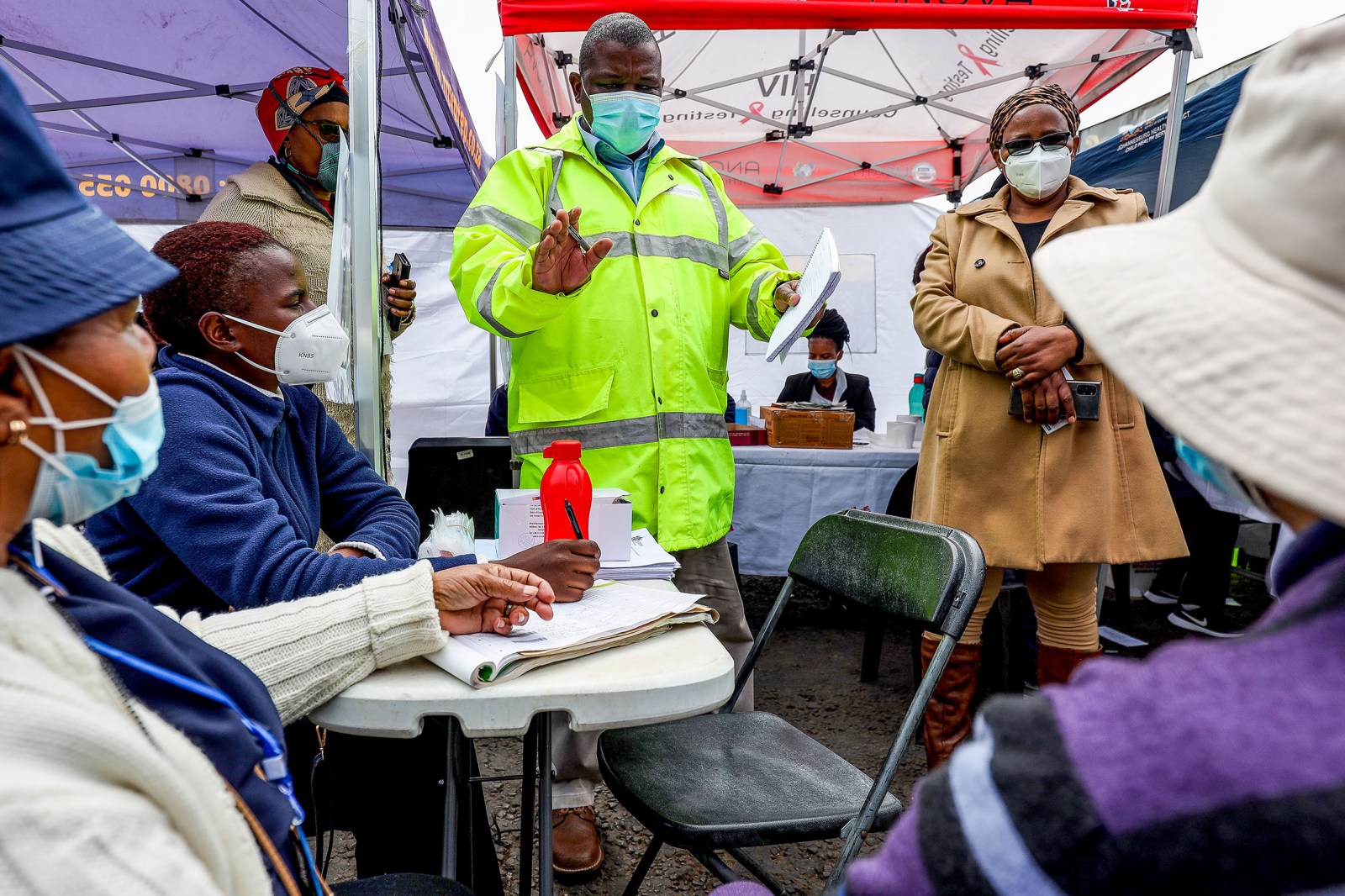 Hundreds of taxi industry employees were targeted by the vaccine pop-up facility during its first day at the Bara taxi rank.

The Gauteng MEC for Roads, Transport and Infrastructure, Jacob Mamabolo, took a departure from his schedule to try to persuade a senior taxi marshal to be vaccinated against Covid-19 at the Bara taxi rank. However, the marshal told Mamabolo to call his mother back home and seek permission for his vaccination.

“You do not walk into a kraal and administer injections on the entire herd; you inoculate only the sick cow. I’m not sick and will not take any Covid-19 vaccine,” Dumisa Mbatha from kwaNobamba in KZN told Mamabolo at the Bara taxi rank on Wednesday afternoon.

Mbatha’s refusal to take the single dose Johnson & Johnson vaccine on offer at the taxi rank forced Mamabolo to heed Mbatha’s request to first seek permission from his parents.

Mbatha is one of hundreds of taxi industry employees who were targeted by the vaccine pop-up facility during its first day at the Bara taxi rank.

“I grew up in rural KZN, and according to our custom only sick people require medical attention. Like I said, only a sick cow will require a jab not the entire head. That is how I was brought up and I cannot change now,” said Mbatha.

Mamabolo asked Mbatha why he was not taking the vaccine and if he was not scared of Covid-19.

Mamabolo asked Mbatha to take the vaccine and even guided him to the vaccination site. But Mbatha insisted on permission from his mother. Mamabolo dialled Mbatha’s mother, who did not give permission for her son to be vaccinated.

Mbatha was not the only person who showed reluctance to take the vaccine. Most of the drivers Mamabolo spoke to at the Bara taxi rank told him they had been vaccinated or were heading to the vaccination site and then simply went to park their taxis, drop their seats and take a nap.

A traffic control officer at the Bara taxi rank’s main entrance said he was not going to get vaccinated. “Why should I?” he asked.

Mamabolo tried to persuade him, but the man, who would only give his last name as Hlatshwayo, said: “Even if I were to die, I won’t take this vaccine.”

However, Eleck Khanyi, the spokesperson for the United Taxi Associations Front and National Taxi Alliance, said: “I have just been vaccinated and hardly felt any pain. Another thing is that today it finally occurred that I must vaccinate. I did not [at first] want to vaccinate. I was scared and I don’t like the double-dose vaccine.”

He said it had taken him a while to take the single J&J vaccine.

“I know many people who have had health complications and even died when they took the second dose of the double-dose vaccine [Pfizer]. Others say it’s tiring for days. But what I can say to you is that all these stories about the vaccines will make any human being cringe.

“No one is giving clarity around these vaccines. This is our main problem here. I’m over 60 years old so you cannot blame me for being scared for my life.”

Khanyi said he was happy that he finally overcame his fears and that a number of drivers were vaccinated.

“We also do not want our drivers to die,” said Khanyi.

The Gauteng provincial leadership has been worried about the rate of vaccination, prompting the move to take the vaccine to the people. As of Wednesday morning, Gauteng had vaccinated about 2.3 million people.

A senior nurse at the Bara taxi site said about 130 people had been vaccinated there by 12.10pm on Wednesday.

“We are very happy that government brought the vaccine where we are, because we do not usually get time to go to… designated vaccination sites,” Sibusiso Mvelase, the Bara City Taxi Owners spokesperson, said.

“I would like to encourage government to continue with this campaign even in other tai ranks. There is a huge gap between the government bringing and not bringing the vaccine where we are. And to be honest with you, the government was very late with this initiative. We were supposed to be the first ones because we are the ones who transport health workers and everyone else to work.”

Mvelase said lack of sufficient vaccination information made drivers reluctant to be vaccinated.

The government’s ambitious vaccination roll-out plan has been marred by misinformation and fake news.

Asked what has been his and other drivers’ main worry, Mvelase said: “We are all scared that if we take the vaccine we might die. We as leaders thought we should lead by example today and show the public that this is not true.

“People and social media are saying a lot of starkly contrasting things about the vaccine. The government should be countering this by vigorously providing the right information on the vaccines.”

Mamabolo said he was satisfied with the turn-out.

“It’s overwhelming, and it’s not only drivers taking the jab, it’s actually everybody,’ said Mamabolo.

“We are ramping up the numbers. We are increasing the numbers at a very good rate and we are pleased with the programme.”

The pop-up vaccination drive was on its third day on Wednesday following its launch in Tembisa on Monday. DM