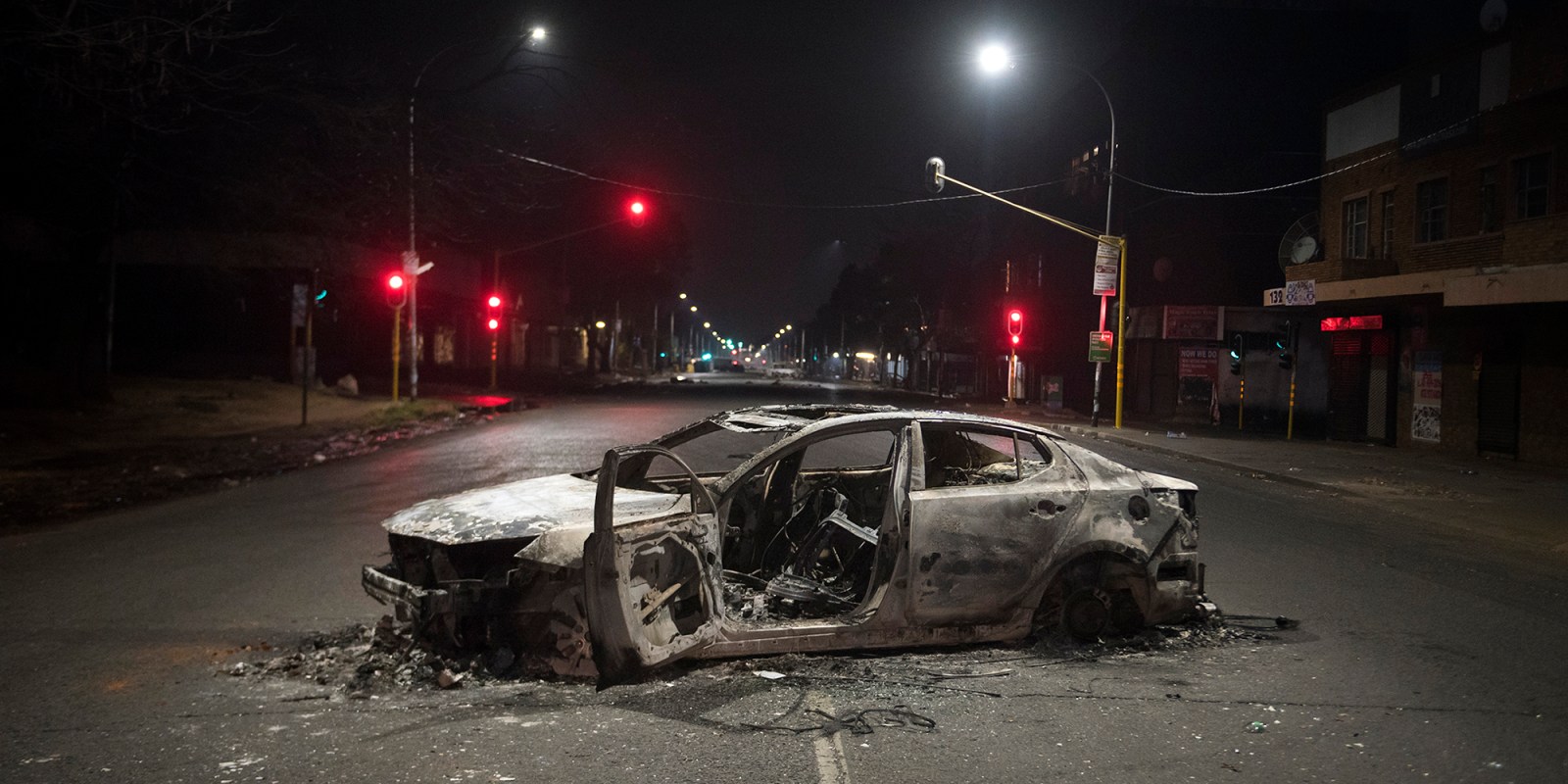 A burnt out car on 11 July 2021 after violence and looting in the aftermath of the arrest of former president Jacob Zuma. (Photo: Shiraaz Mohamed)

The principal architects of the broader violence should be the key focus of state attention. But we also need to more fully understand and address the racially defined violence in Phoenix and elsewhere.

Following last month’s unrest, a new battlefield has emerged in South Africa. Partly a battle about accountability, it is also about the story that we tell about these events, about how South Africa addresses their legacy and remembers their victims.

One front in this battle is about the overall nature of the events. Many have accepted President Cyril Ramaphosa’s characterisation of the unrest as having originated in an insurrection. But some have questioned this approach. The political scientist Anthony Butler has argued that it is a mistake to analyse the violence in terms of “a single story”. The violence was at best “loosely coordinated”. “Insurrection” suggests too high a degree of centralised planning behind the violence, he says.

Whatever the level of planning, the available information indicates that, in a bizarre twist of post-liberation politics, KwaZulu-Natal-based elements linked to the ruling party launched a rebellion against the government. It is important to recognise, however, that this continues an established feature of South African politics.

Contestation within the African National Congress has been an important driver of much of our violent unrest for many years. It has also been behind many political killings. The fact that South African politics continues to be defined by a culture of violence is directly linked to the fact that some of those associated with the ANC continue to regard violence as an acceptable political instrument.

The implication of last month’s events is that some members of the ruling party, and their associates, must be brought to trial on charges of treason or sedition. Though this may itself precipitate conflict, it is important for the state to respond in a firm manner. If it doesn’t, opponents of the government within the ANC will hold the country hostage. Conflict within the party will continue to be a major cause of instability in South Africa.

The question of whether it was an insurrection should be important in deciding what the main instigators of the unrest are prosecuted for, should they ultimately be arrested and charged. At this point, however, we cannot assume that accountability of the principal instigators will be achieved.

Investigators from the Hawks and the National Prosecuting Authority should ensure that those who orchestrated and fanned the violence are brought to justice. But both of these agencies face capacity constraints. They are already overwhelmed with a range of complex cases, many of them related to State Capture.

The ANC should also take action against those among its ranks responsible for last month’s violence as well as addressing its broader responsibility for political violence in South Africa. Whether any progress will be made in this regard is also open to question, partly because of likely resistance from elements within the ANC to efforts to ensure accountability.

Along with the need to focus on those who instigated the broad unrest, there is another, more localised, issue that clearly also requires focused attention. Up to 350 people appear to have died in the course of the unrest (the current official figure is 342). Some died in stampedes or in what may be seen as accidents during the pandemonium at malls and warehouses, or while fleeing from these locations. The circumstances in which many died remain unclear.

What is known is that a significant number of those who died were shot, or otherwise killed by other people, including by participants in the unrest, other civilians (including private security guards) and police. An analysis by Daily Maverick of 109 cases “where the cause of death was able to be established” concluded that at least 70% of these people had been shot “either by live ammunition or rubber bullets at close range”, with the majority having been killed by civilians.

We do not know the full number of people killed by other civilians. But upwards of 30 people appear to have died in acts of violence in and around Phoenix, an area previously designated for Indian occupation in terms of apartheid laws. There is evidence that the dynamic that drove this violence also contributed to violence and deaths in other previously Indian areas in the eThekwini metro. Some victims in this group, potentially the majority, were black South Africans who lived in or around these areas and who died in acts of often arbitrary violence, in which the targets of violence were chosen purely on the basis of race, and in which racial animosity appears to have played an important role.

Great effort has been made by many South Africans, across all of South Africa’s apartheid-defined racial groups, to address racism. It is unfortunate, and very sad, to have to acknowledge that the perpetrators of this violence were (largely or exclusively male) Indian members of these communities, some of them possibly linked to Indian-owned private security companies. It would be a mistake to depict them as representative or representatives of the communities in which the violence occurred. Nevertheless, their actions raise questions about to what degree they reflect persistent racism in these communities.

In understanding the circumstances in which these killings took place some emphasis must be given to the broader context of looting and chaos. There were other areas, in both KwaZulu-Natal and Gauteng, where community members, taxi drivers and others played a role in defending their communities, or malls that were targeted by looters. In some of these areas lives were also lost as a result of the (apparently defensive) use of firearms by community members. Messages on social media also apparently led some Indian members of the community to believe that their communities would be targeted.

What distinguishes Phoenix, and some other Indian areas, is that efforts to defend the community took on a highly belligerent racially charged dimension. Notwithstanding the fact that there are also many black African residents within these communities, some community members appear to have seen any and all black Africans as legitimate targets on the basis that they were likely or potential looters. Cars driven by black people, including community residents, were fired at. People were pulled from cars and attacked with sticks and baseball bats. The violence used went far beyond anything that could be justified in the name of preventing looting or protecting the community.

In the coming months and years, a major focus of contestation is going to be about the relative prominence that we give to these deaths in how we talk about and remember this anarchic period in the history of our country.

It is valid to focus on those responsible for the broader unrest and the violence, arson and looting that was part of it. But the Phoenix violence cannot merely be depicted as an incidental consequence of the chaos that prevailed at the time.

The principal architects of the broader violence should be the key focus of state attention. But we also need to more fully understand and address the racially defined violence in Phoenix and elsewhere.  This will require that we engage with questions about the continuation of racial prejudice in many communities. One difficulty that we will have to live with is that, in this process, the desire for truth and the desire to avoid further embedding racial antagonism and enmity within South Africa society, will not necessarily be mutually reinforcing aims.

There appear to be some who wish to focus on the Phoenix killings to the exclusion of any attention to the broader violence and others who died.  Among this group there appear to be some who are motivated by racial vindictiveness. There is a valid concern that what happened in Phoenix and some other Indian communities in Durban will be exploited to fuel further racial animosity. Addressing the legacy of the Phoenix violence in a manner that does not further reinforce fractures within South African society will require sustained and considered effort.

South African society is already grappling with a multitude of complex challenges. It is not clear that sufficient resources and attention will be invested in addressing the varied and complex questions of accountability, truth, violence and the persistence of prejudice emanating from, and illuminated, by last month’s violence. In so far as we fail to do so effectively we run the risk that we will pay a heavy price in the years to come. DM