Is crypto stealing gold’s inflation hedge shine? Not just yet 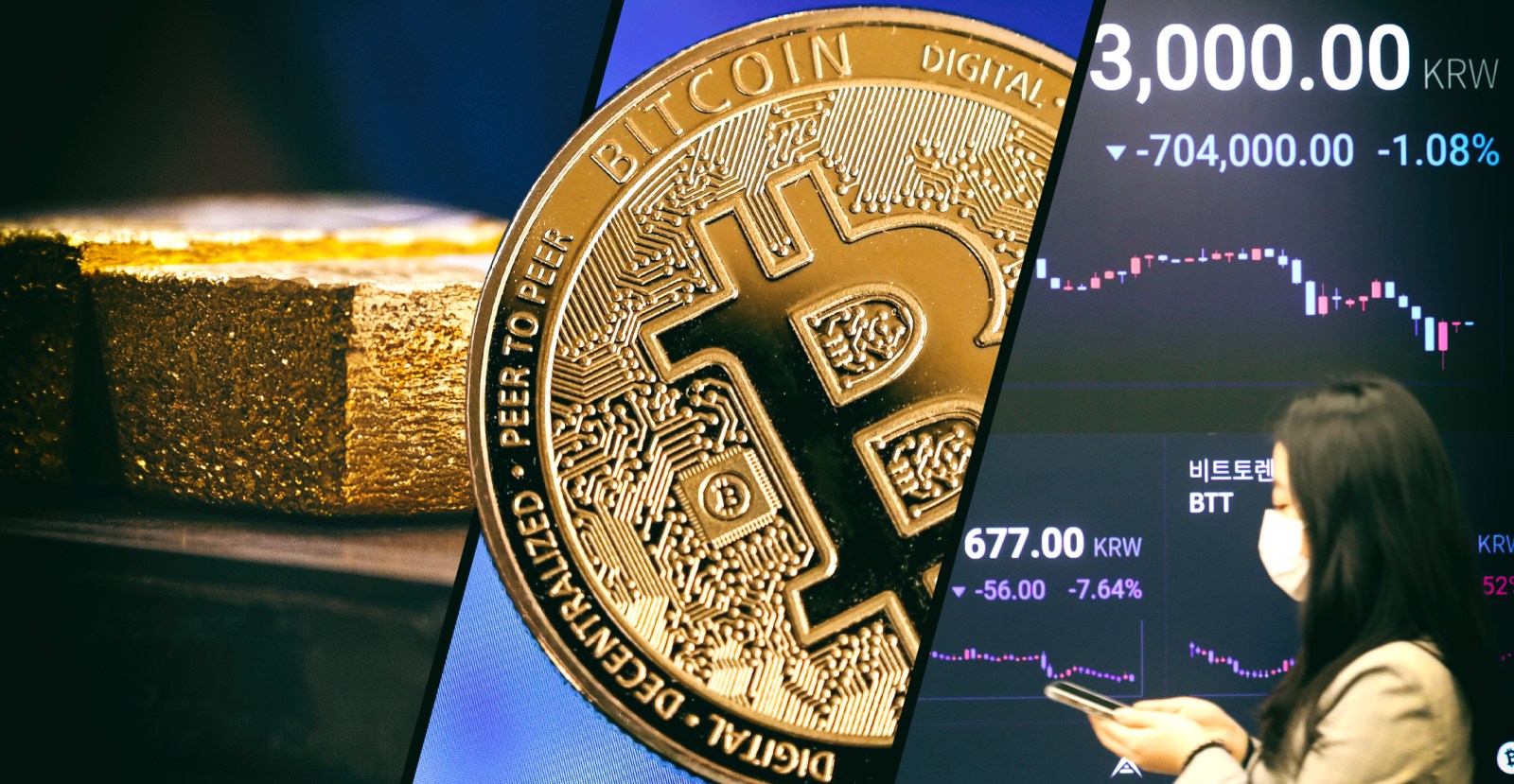 Gold bullion bars in South Africa. (Photo: Waldo Swiegers/Bloomberg via Getty Images) | A general view of the cryptocurrency Bitcoin (Photo: EPA-EFE/SASCHA STEINBACH) | A woman walks past an electronic board of a cryptocurrency exchange showing the price of bitcoin in Seoul, South Korea, 22 February 2021. (Photo: EPA-EFE/YONHAP)

As the Covid-19 pandemic struck in early 2020, sending economies reeling and stocks and currencies tumbling, the price of gold began a steady rise. By mid-year it punched through the $2,000 per ounce mark on its way to its highest level yet by September, a more than 40% increase.

Up until September 2020, gold, the safe-haven asset par excellence, had performed as expected. Almost instinctively, investors, anxious to protect their wealth against economic implosion, bought and bought the shiny yellow metal. But by the final quarter of the year, gold prices began to dip. As vaccines against the coronavirus were developed and administered in the northern hemisphere, edging global economic activity toward normality, risk aversion eased and the gold price slid back toward the $1,600 mark.

So far, so normal.

But the sands shifted again in March 2021. A more familiar pandemic — inflation — was in the air. America’s central bank, the Federal Reserve, warned that consumer inflation was rising fast and signalled it would begin tightening the taps on the waterfall of money it pumped into the global economy. The Fed’s policy of quantitative easing had worked too well, and long-wished-for inflation was rising fast, beginning the year at 1.4% and topping 5% by May. Cue another rise in gold prices. Bullion kissed the $1,900 mark.

But that was a brief, merely early summer’s tryst.

By late June gold slumped back toward $1,700 despite breakneck inflation in the US and elsewhere in developed markets. Gold, as the automatic hedge against inflation, was losing its shine.

“Gold is traditionally seen as an inflation hedge, but if you look at the long term, it’s not,” said chief economist at Old Mutual, Izak Odendaal. “It tends to be a hedge against extreme inflation. It did very well in the 1970s and again over the last 10 years or so, in response to the perception that there would be a lot of inflation. Now, interestingly, there is a lot of inflation but gold has not performed well at all.”

Enter crypto assets like Bitcoin and Ethereum. The blockchain-based “currencies”, which share many characteristics with gold — they are both scarce and can act as a store of value in place of money whose value is eroded by inflation — have soared in 2021 after a meek 2020, luring investors running scared of consumer price growth. Between January and April 2021, the price of Bitcoin jumped from just under $20,000 to a peak of just over $63,000, a more than 300% increase.

“It’s possible that gold has lost some of its traditional investor base to crypto,” said Odendaal. “But crypto may be too volatile. One week it looks like a good inflation hedge, and the next week it doesn’t. Its role in a portfolio, for now, is largely undefined. And you say that that’s great, it’s completely uncorrelated to everything else,” said Odendaal.

Some influential investment houses have made the case for crypto as the new gold hedge — but they are also hedging their bets. New York-listed investment house, Man Group, called Bitcoin “at best, an unreliable inflation hedge”, warning that it tended to behave like a risk asset.

The uncertain regulatory environment around crypto assets is slowing its rise to a true hedge, with the global powerhouses, China and the US, leaning towards a strict regime.

“Gold used to do well against inflation and against a weak dollar. That relationship has broken down over the last decade. But you can’t totally apply the same logic to crypto currencies. To hedge against inflation it needs to be a stable asset class and move in the opposite direction of inflation. But cryptos are swinging about 20% every week in either direction,” said Michael Treherne, a portfolio manager at Vestact.

“What we’re seeing is that in a low-interest environment, money is starting to flow to the likes of Apple as a way to hedge themselves. It has a couple of hundred billion dollars on its balance sheet. There are a number of other financial instruments you can use, so gold’s status has certainly diminished a bit,” said Treherne. BM/DM