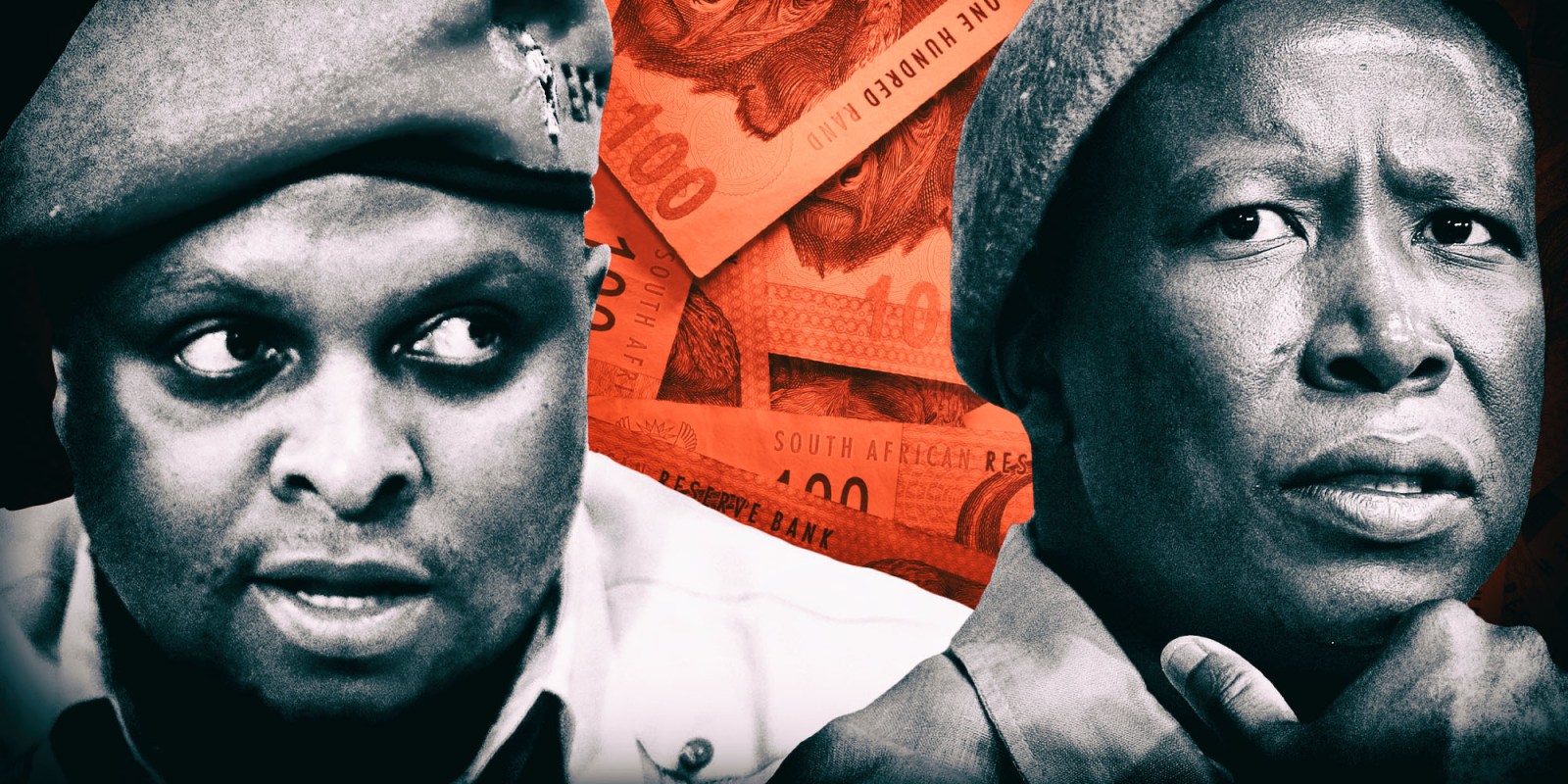 The EFF leaders each received millions through a money laundering scheme – funds they used to prop up their glitzy lifestyles, their families, their businesses and their political aspirations.

The leadership of the EFF have, since 2014, positioned themselves as a government in waiting, a party with a strong moral compass focused on land, social justice and, above all, a limitless anti-corruption stance.

Sceptics flagged Julius Malema’s days of allegedly receiving laundered money from On Point Engineering, a company that received illegal government contracts in Limpopo in the 2010s. (The National Prosecuting Authority dropped the criminal case against Malema and have never taken it further since.)

It was the SA Revenue Service (SARS) and then-Public Protector Thuli Madonsela who told us in 2012 that Malema, who was then the ANC Youth League leader, was using his Ratanang Trust to receive questionable income to support his extravagant lifestyle. By then it was already well known that where Malema goes, his trusted sidekick Floyd Shivambu follows. Back then, Shivambu already displayed a penchant for violence and the intimidation of journalists.

In Jacob Zuma, however, civil society, the sceptics, the critics, other opposition parties and journalists found common ground with the EFF. The National Prosecuting Authority’s bungling of serious charges closed the door on the On Point crimes’ prosecution.

Six years later, the EFF leadership participation in the fraud perpetrated against VBS Mutual Bank shattered that door, opening the line of sight on an ugly reality of corruption behind threats of violence, and treachery behind the professions of probity and fairness.

In the week the EFF hounded former minister of finance Nhlanhla Nene out of his job, Van Wyk for the first time revealed that the EFF leaders and the party itself had benefited from the VBS fraud by using Shivambu’s brother, Brian, as a front and bagman, while leaving crumbs on the table for him personally.

Malema and Floyd Shivambu each received millions through a money laundering scheme – funds they used to prop up their glitzy lifestyles, their families, their businesses and their political aspirations.

This week, Van Wyk revealed that SARS had initiated liquidation proceedings against Brian Shivambu’s two companies which he used as a front to funnel fraudulent funds to his brother and the EFF leader. Brian Shivambu has now been “asked” by the revenue service to pay R28-million in taxes.

Grand Azania and Sgameka Projects, SARS told the court, “have been utilised by its director and only shareholder, Brian Shivambu, as vehicles through which he defrauded the VBS Mutual Bank of approximately R16-million”.

Attached to these liquidation applications in support of SARS’ argument before court are six months’ worth of Floyd Shivambu’s FNB Private Wealth bank accounts, dated 25 May to 24 November 2017.

The first proved that Floyd Shivambu – beyond a reasonable doubt – received at least R1.84-million in VBS loot which was washed through Sgameka Projects and Grand Azania using 23 payments. Close to R2-million was channelled to the EFF’s two bank accounts.

The second theme is that in those six months Shivambu received over R2-million more than his salary from Parliament. Here, he received around R44,000 per month, which, along with three ad hoc payments, came to a total of R260,448.85. Shivambu never reported any additional income or assets to Parliament. It now appears clear that Shivambu received more illegal cash than only the VBS loot.

The curious timing of these payments is the third theme. Hundreds of thousands of rands habitually hopped between VBS bank, Sgameka Projects, Grand Azania and Shivambu’s FNB Private Wealth bank account within days, and sometimes hours, of receiving VBS loot.

Van Wyk followed the breadcrumbs, which led to the fourth theme. The 23 payments of VBS loot we could track right into Shivambu’s FNB Private Wealth account were named “Repayment Gaw”, referring to Grand Azania Wines.

If we stick to the pattern and search in the Grand Azania bank statements beyond the six months in FNB Private Wealth statements, we find 61 payments described as “Repayment Gaw”, totalling R4.269-million. We therefore have good reason to believe that Shivambu received much more in VBS loot than we can trace beyond reasonable doubt at the moment.

The fifth theme is VBS loot supporting Shivambu’s family. His wife, Siphesile Pezi, received at least R555,087 in cash, and a R400,000 deposit towards a Mercedes-Benz for her benefit was made. There is no evidence that Pezi knew she was the beneficiary of the proceeds of crime. More cash was spent on Shivambu’s children, for payments described as “childsupport Floydshivambu”(sic) and the names of his children.

All in all, VBS managers and auditors and businesspeople, as well as ANC politicians and EFF leaders stole more than R2.7-billion from the bank, the VBS liquidator found.

These people stole the money – and the future – of vulnerable people who trusted in VBS Mutual Bank. They stole the education of young people, the pensions of the old and the lifeline of the poor. As the only members of Parliament (we know of, so far) involved, Malema and Shivambu’s crimes are all the more egregious.

Malema and Shivambu showed us they took careful notes in 2012 and came back smarter and more crooked, adept at using front companies to cover up their crimes. They don’t squirm at the idea of putting a brother in harm’s way to act as their front and bagman. Now slapped with a R28-million tax bill, Brian Shivambu may be criminally charged for his involvement. Just the repercussions of the SARS investigation and liquidation proceedings will have long-term legal effects on his ability to earn any legal living.

Floyd Shivambu had no regard for the invidious position he put his elderly parents in when he manipulated bank managers into giving Brian Shivambu a property loan for a house for his parents to live in. SARS sees the “loan” for what it is – another way to steal – and now wants it sold in order to help pay for Brian Shivambu’s escalating tax debt.

Ours is a poor country that is sinking deeper by the day. We need dedicated, decent and competent people to lead us out of the doldrums. Crises like our current one, sadly, are an ideal breeding ground for populists and budding autocrats. We must be aware of it and forcefully reject them. Ten years of Zuma should have proven to anyone the long-term damage corruption and cluelessness can wreak upon a country. EFF leaders are only the new and improved models of the same conveyor belt as Zuma, with upgraded political chips and memory failures that allow them to worship Hugo Chavez, Robert Mugabe and Muammar Gaddafi.

These are dangerous people who cannot be trusted. After Van Wyk has proven beyond any doubt that they stole VBS’s millions, how much more of our people’s future must they steal for the people of South Africa to realise Malema and Shivambu were in it only for power and money, and especially money? DM