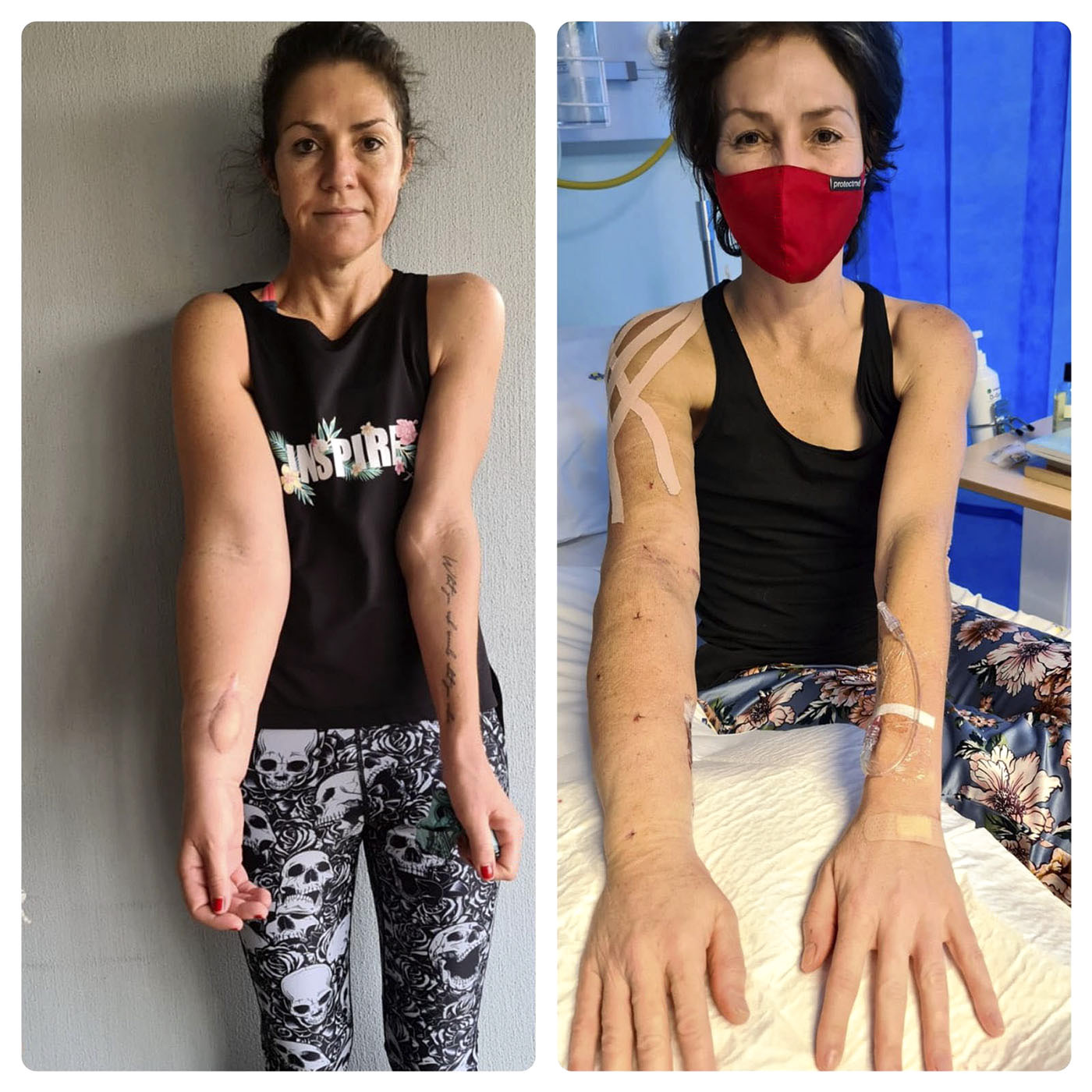 A life-altering procedure that brings relief to patients who suffer from debilitating lymphoedema — a complication more than 20% of breast cancer survivors develop — was brought to South Africa by a surgeon. She recently performed the third local operation and Daily Maverick was in the operating theatre to see how it is done.

Four years ago, Karen Jackson, 45, survived advanced breast cancer, but she was left with a right arm three times the size of the left. Six months after her mastectomy and the removal of lymph nodes under her arm followed by radiation treatment, she developed severe lymphoedema.

“It happened overnight.” It became so bad at times she could not use her hand or arm. “Sometimes I would not make lunch for my children.” She nearly lost the arm after she developed painful cellulitis (a serious bacterial infection) twice. “It was completely debilitating and had a terrible impact on my life. And the worst is, no one really talks about this.”

However, a week after a recent operation at Cape Town’s Netcare Christiaan Barnard Memorial Hospital, performed by vascular surgeon Dr Laura Redman, Jackson is back home. She is overjoyed at the relief the operation brought from the extreme discomfort she suffered for nearly three years.

Lymphoedema refers to gross swelling of a limb from poorly draining lymphatics. When lymph does not drain, fluid collects in the arm or leg causing it to swell.

Over time, lymph fluid that is not cleared out of the limb turns into fat tissue (adipose tissue). It is still being researched as to exactly why this happens, but this fat accumulation is irreversible, says Redman.

Redman trained for this in Sweden and bought her own equipment to perform a debulking surgery, removing the accumulation of fat. The first procedure in Africa was done last year just before lockdown on Simone Blanckenberg (40) who had severely limited mobility. She had been living with lymphoedema for more than eight years following a battle with skin cancer on her leg. After the removal of lymph nodes and radiation treatment, she developed the condition.

It is 08:00 on a Friday morning and Redman, assisted by Dr Roger Graham, a reconstructive surgeon, are ready for the operation. In the weeks leading up to the procedure Jackson received intensive therapy to drain the fluid from her right arm and she wore a custom-made compression garment.

Primary lymphoedema is rare and occurs in one in every 100,000 people. It is a congenital condition. Secondary lymphoedema is far more common and usually occurs as a complication from the treatment of certain cancers. It can develop after one has had surgery and/or radiotherapy in the armpit or groin, resulting in damage of the lymphatics and an inability for the lymph to drain. Radiotherapy increases one’s chances thrice to develop the condition.

By taking four measurements of the healthy arm and making calculations Redman knows she needs to remove just under a litre of fat from Jackson’s arm. It is a sophisticated form of liposuction and is not done for cosmetic reasons.

After Dr Simon Christie administers the aesthetics and the nurses sterilise the arm, the team is ready to start. A pneumatic tourniquet is applied to the upper arm to restrict blood flow. “We have to do this, because the liposuction is so aggressive the patient will lose far too much blood without it,” says Redman.

Jackson’s arm turns a ghostly white, devoid of all blood. The time on the tourniquet starts, they have 150 minutes.

Tiny incisions are made to allow the power-assisted de-bulking device to penetrate under the skin. It uses specially developed cannulas that are connected to a vacuum pump, which creates a negative atmospheric pressure. The cannulas vibrate as they move under the skin, which helps to loosen and liquefy the fat tissue.

Redman and Graham take turns to make small incisions as they go along the arm. The de-bulked fat gathers in a measured container so they can see how much they have removed. Every so often they take measurements at four points on Jackson’s arm, comparing it to the healthy left arm. Feeling the difference between the skin and the fat tissue, while they work.

The aim is to have both arms as close as possible to each other in size. Jackson had a lymph transfer from elsewhere in her body to her wrist a year ago, but it was unsuccessful. It is now just a large unsightly, dysfunctional lump. After the doctors determine there is enough skin to suture it close afterwards, they remove the blocked lymph transfer.

“I was overjoyed when I saw afterwards they removed it. It was a constant reminder that I had cancer. Not only was the cancer life-changing, but the lymphoedema robbed me of my quality of life. I cannot tell you how uncomfortable it is,” Jackson said.

The beeping of the pneumatic tourniquet is a reminder that time is running out. The arm needs its blood flow. As soon as the tourniquet is deflated the blood rushes through the arm and drops of blood seeps through the tiny incisions they made. They are quickly sutured.

At 11:25 Suzy Davey, an occupational therapist who specialises in managing lymphoedema and Emily Prioleau, a nurse, sterilises the arm. They apply three layers of bandages and a compression garment all the way up to the place where the tourniquet was placed. This is critically important to maintain the success of the procedure.

But, the tourniquet could not tie off the blood flow of the upper arm where there is still a lot of fat tissue. Redman and Graham have to work fast to de-bulk this area as well. “I could not feel the muscle in my upper arm, or my elbow, that is how bad it was. It was difficult to bend my arm. The arm was so heavy… when I went jogging my hip started giving trouble due to the weight. I had to jog with a counterweight in my other arm.”

Without the tourniquet the difference is huge, the blood loss is severe. The doctors work fast to remove as much fat as they can. They measure the arm. It’s as perfect as can be and will look even better after a few months when the swelling goes down.

At 12:30 they are finished and the rest of the upper arm is bandaged. It’s the third procedure of its kind in Africa.

To prevent the lymph and fat tissue from building up once more, and to stop the associated complications of lymphoedema, a strict lifelong regime of compression needs to be followed by wearing custom-made compression garments.

“I am in love with my new arm. It is so much better. It is giving me hope, so much hope, and other people who suffer from this also need to know that there is hope,” says Jackson. DM/MC