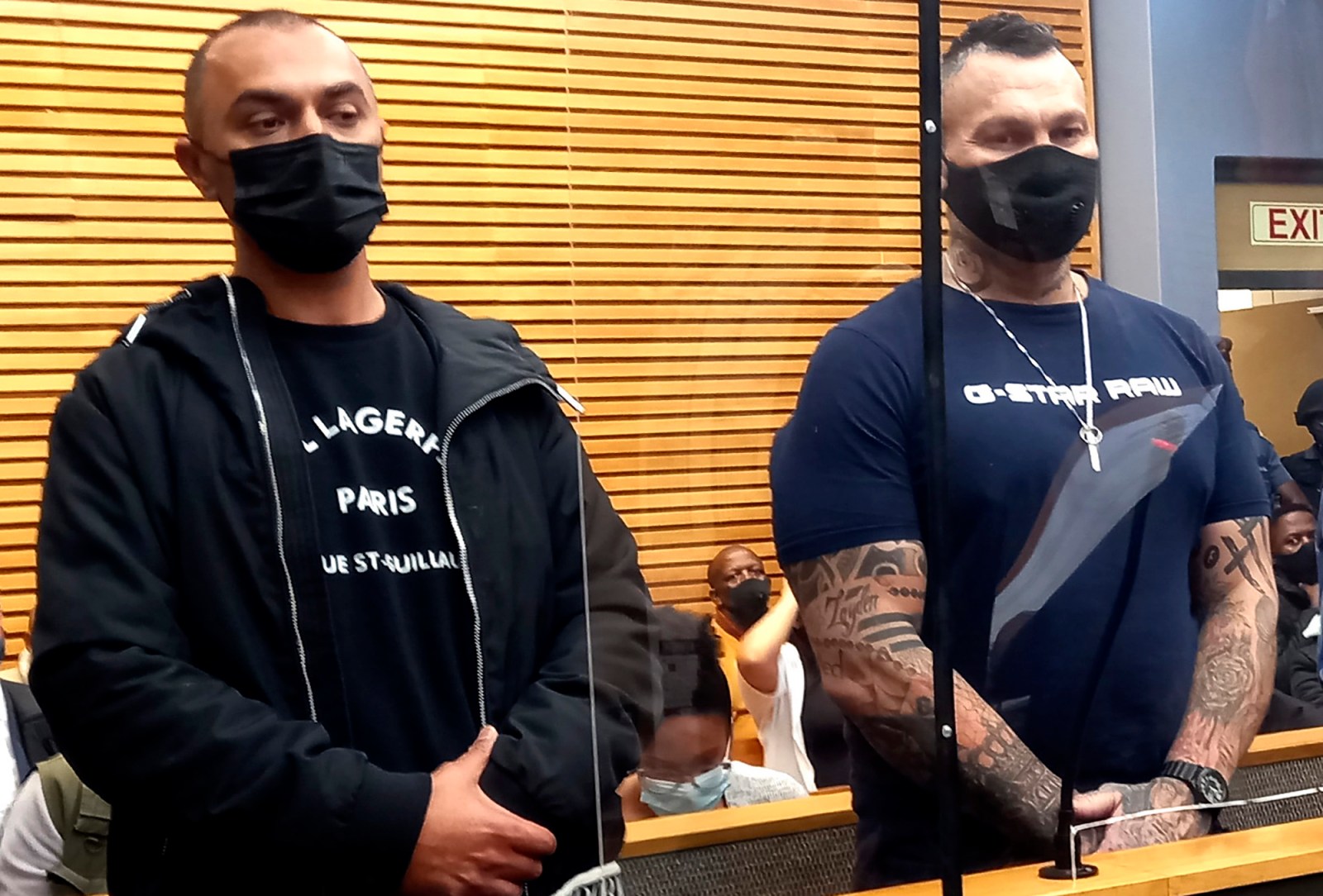 Nafiz Modack, co-accused in the murder of Lieutenant-Colonel Charl Kinnear, in the dock with Zane Kilian. (Photo: Vincent Cruywagen)

On Tuesday Nicolene Kilian was drawn into bail proceedings for her husband, murder accused Zane Kilian, and co-accused Nafiz Modack, Jacques Cronje and alleged corrupt Anti-Gang Unit (AGU) sergeant Ashley Tabisher in the Blue Downs Regional Court. Co-accused Ricardo Morgan, who is out on R50,000 bail, was also in the dock.

Eric Bryer, who was fired as Kilian’s instructing attorney, was replaced by Port Elizabeth-based lawyer Danie Gouws, who was placed on record on Tuesday.

Botha told the court that four police officers had visited Nicolene Kilian on 10 August seeking a statement. Gouws had not been present but had spoken to the officers and had requested them to leave.

“However, on Wednesday 11 August, the police officers were back and wanted a warning statement,” said Botha.

This was after Kilian’s wife had contacted Gouws, who had instructed her to provide a warning statement, which was handed in by prosecutor Blaine Lazarus during proceedings on Tuesday.

Botha objected that he had not yet seen the statement and requested it for perusal, saying he also needed to speak to Nicolene Kilian.

However, Kilian told Maverick Citizen that Gouws was not her lawyer.

“He is representing my husband and not me. I don’t want to be part of this circus,” she said.

Bail for two other accused, Amaal Jantjies and Janick Adonis – who are, according to the State, the main conspirators in five attempts on the life of Anti-Gang Unit detective Charl Kinnear, including a failed hand grenade attack in November 2019 – has already been denied.

The group faces several charges, which include the murder of Kinnear on 18 September 2020, the attempted murder of lawyer William Booth in April 2020, conspiracy to commit murder, extortion, corruption, racketeering, money laundering, contravention of the Prevention of Organised Crime Act and contravening the Electronic Communications Act.

There was drama before the court proceedings even began on Tuesday when Modack’s advocate, Dirk Uys SC, Kilian’s lawyer Botha, and advocate Edwin Grobler, representing Cronje, tried to consult with their clients in the holding cells.

The lawyers accused the prosecution of preventing them from meeting their clients.

“My client and the others’ rights to counsel have been violated. The prosecution has no right to deny access to my client. This is an indication that the State is trying to discommode my client,” said Uys.

State prosecutor Greg Wolmarans denied that he had given the police such an instruction and told the court he had been approached by a captain in charge of cell duties at the court who had complained of the numbers of lawyers consulting clients in the holding cells.

Magistrate Deon Van der Spuy ordered four counsel at a time to be permitted to consult with clients in the holding cells. This is in line with Covid-19 regulations.

After the lunch break, the bail application of Kilian, Modack, Cronje and Tabisher finally got underway after three months.

Prosecutor Lazarus said arguments would be based on affidavits of the three investigators who are part of the national task team investigating the assassination of Kinnear.

The first was that of Warrant Officer Trevor Shaw. His affidavit was used by the State to deny bail to Jantjies in the Parow Regional Court earlier this year.

It also illustrates how Modack allegedly used Jantjies to draw Tabisher into this web. Tabisher allegedly agreed to a payment of R10,000 to keep Modack informed of intended raids at his house.

“It is believed that Kinnear was shot dead due to his involvement in an investigation against well-known underworld figure Nafiz Modack. This investigation focused on extortion, fraud, corrupt activities with police officials, money laundering, the underworld security services and illegal firearm-related activities,” Shaw’s affidavit reads.

It further states: “It must also be mentioned that Tabisher knew Jantjies. I later established that they had a corrupt relationship. It is my submission that due to his relationship, he did not want to physically participate in the arrest and search of Jantjies.”

The proceedings in concluded with a recording of a meeting between Tabisher and Jantjies. Jantjies can be heard asking Tabisher if he could help with information on when the AGU would raid Modack’s house.

She can also be heard asking Tabisher how much he wanted and that she was prepared to pay him weekly. The matter continues on Wednesday. DM/MC