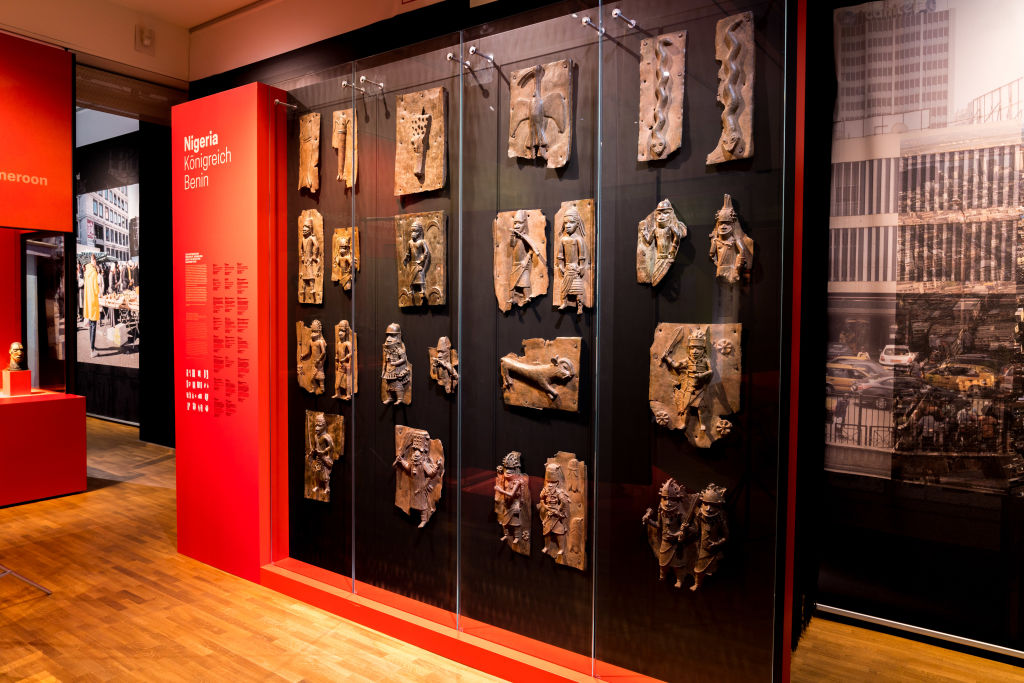 Bronze sculptures looted by British soldiers from the Kingdom of Benin in 1897 hang on display in the "Where Is Africa" exhibition at the Linden Museum on May 05, 2021 in Stuttgart, Germany. The Linden Museum is among several museums in Germany that have items known as Benin Bronzes in their collections, as do other museums across the world. German authorities recently announced that German museums will return their Benin Bronzes to Nigeria beginning next year, the first commitment with a timetable by a government to do so. British soldiers stole thousands of Benin Bronzes, priceless artefacts made of brass, wood or ivory, in a raid in 1897 from the Kingdom of Benin, located in present-day Nigeria. The Linden Museum has been a participant in the Benin Dialogue Group to participate in the planning of the new Royal Museum in Benin City. (Photo by Thomas Niedermueller/Getty Images)

After years of pressure, Germany recently announced that an agreement had been reached to return hundreds of priceless artefacts and artworks that had been looted from Nigeria in colonial times and were on display in German museums. Commonly called the Benin Bronzes, these beautiful and technically remarkable artworks have come to symbolise the broader restitution debate. Why has it taken so long, will other countries follow Germany and what happens next? We asked a leading expert on colonial German history and a prominent voice in the debate around the artefacts, Dr Jürgen Zimmerer, to tell us.

What are the Benin Bronzes and why are they so important?

The Benin Bronzes – or rather Benin objects, because not all of them are made of metal; some are ivory or wood – are objects originating from the Kingdom of Benin, in today’s Nigeria. When the British Empire invaded the kingdom in 1897, thousands of the objects were looted, partially to pay for the costs of the military expedition.

They were later auctioned off in London and elsewhere and soon became central pieces in the collection of many museums in the Global North. Due to their artistic brilliance, they changed the way Europeans saw African art, as they could no longer pretend that there was no art in Africa but only craftsmanship, as the old racist colonial stereotype had it. Nevertheless the Europeans, and later the US, had no problem keeping the loot.

Why are they in the news now?

Almost since their looting, demands for their restitution have been made by Nigeria and other African states. So they were never entirely absent, but perhaps not in the global media. Now, with the intense interest in the question of colonial loot, the focus has also turned to them. Central for this shift in interest was the announcement by French president Emmanuel Macron in 2017 in Ouagadougou, to return colonial loot from French colonial museums and to commission the ground-breaking report by Senegalese academic and writer Felwine Sarr and the French art historian Bénédicte Savoy that ultimately supported his decision.

So was the approaching opening of the Humboldt Forum in Berlin (which eventually opened on 20 July 2021), one of the largest museums in the world. It houses the collections of the former Berlin ethnological museums and more than 200 Benin Bronzes were meant to go on display there. However, activists and scholars, who had pointed to the problem of colonial loot, have stopped the plans for the moment, not least because of the international media interest.

In Germany, this parallels the attempt to come to terms with the first genocide of the 20th century, committed against the indigenous Herero and Nama people in what was then German South West Africa, today Namibia, which also drew attention to the question of colonialism and its legacies.

How has Germany handled the return?

Poorly, very poorly, to be honest. Those in charge of (cultural) policy and many of the museums were initially unaware of the “problem” of colonial loot at all. When pressure mounted, they downplayed the critique, ridiculed the critics, then attacked and defamed them. The low point, so far, has been one of the initial founding directors of the Humboldt Forum, the art historian Horst Bredekamp, accusing postcolonial critics of being anti-Semitic. All this in order to protect both the collections and the traditions of Western scholarship connected to them against the allegation – justified in my opinion – of having ignored the racist traits in their histories.

Only after pressure both by German civil society and (international) media did government and museums concede that some – the official communiqué spoke of a “substantial number” – of the Benin Bronzes should be returned.

Where are the rest of the bronzes?

They are distributed all over the global North. Even if Germany were to return all of the Benin objects in Berlin, this would not amount to much more than 10% of what was looted. To be sure, other museums will follow, or even play at leading the returns, such as museums in the German cities of Stuttgart or Cologne. However, other big museums outside Germany are slow to follow. Colonialism was a European project and so was the looting of art. So all of Europe, all of the Global North are implicated and need to address this issue. Many Benin Bronzes are for example in the US.

The most important collection however, with up to 800 of the artefacts, is in the British Museum in London, which, apparently with the support of the government, has categorically denied the need for restitution. This ties in with a larger debate about taking responsibility for colonialism as a crime against humanity. In the Global North we are now prepared to concede that there were acts of violence within colonialism, however we have to understand that colonialism in itself was (and is) violence. We have to decolonise and must advance to a position of global social justice, especially if humankind wants to stand a chance of surviving the climate crisis.

What is expected to happen after they arrive in Nigeria?

There is currently an Edo Museum of West African Art being built in Benin City in Edo State in southern Nigeria, which should be hosting Benin Bronzes. How exactly returned artwork is distributed between Nigeria as a nation state, Edo state as federal entity and the Oba King – as heir of the former kingdom and representative of the Edo people – is still a matter of discussion. Frankly, however, this is not the Europeans’ concern. What the rightful owners do with their art is their decision, and this must not delay restitution. DM/ML