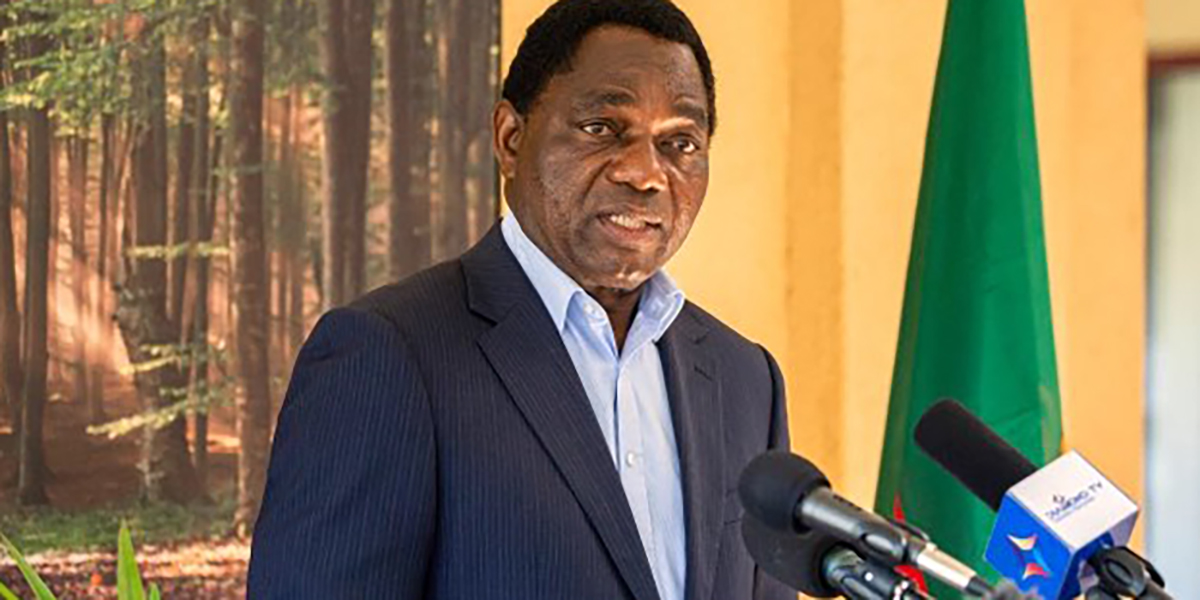 Hakainde Hichilema, President-elect of the Republic of Zambia. (Photo: Twitter)

Zambian president-elect Hakainde Hichilema told Zambians ‘change is here’ as opposition parties in neighbouring countries congratulated him on his victory.

Fifteen years of trying have paid off for United Party for National Development (UPND) leader Hakainde Hichilema, who finally won the sixth election in which he contended for power with a convincing 59.4% of the vote. The incumbent, Patriotic Front leader Edgar Lungu, had 38.3%.

The 59-year-old Hichilema — known as HH — addressed journalists and supporters at a press conference at his home in Lusaka on Monday afternoon shortly after Lungu conceded defeat. He said he wanted everyone to have the opportunities that came his way.

“I never thought I could aspire to be the president of this country,” he said, “because I was born in a village in a grass thatch house.”

For the first three years of his life, he wore no shoes, but then got the opportunity to make it big — first as a businessman and the CEO of an accounting firm, and later in politics.

“We want to expand these opportunities for all our children, to better what HH has become,” he said, “and more so in the last few days when Zambians decided to accord us with this rare opportunity to serve them. Why should that be denied to another child, male or female? Not at all.”

He said he entered the business world when he was 26, but wanted to see people do this at an even younger age. Hichilema made all the right noises in his speech about growing the economy, making the country’s considerable mining sector an attractive investment prospect, building unity in the country and restoring democratic rule and good governance.

He also told supporters not to seek retribution after a gruelling contest on an uneven playing field, where the opposition was barred from having rallies under Covid-19 regulations and was afforded less airtime on the state-owned broadcaster than the governing Patriotic Front.

“Follow my example,” he urged, adding that he had been demonised and arrested 15 times, but would not now retaliate by arresting those who arrested him, “because then we’re no different from them”.

His victory was keenly watched by opposition politicians in neighbouring countries, as it is the third time since multi-party rule in Zambia in 1991 that power has been transferred peacefully to another party after an election.

South Africa’s Mmusi Maimane, former chairperson of the Southern African Partnership for Democratic Change — a network of opposition parties in the region — said Hichilema’s victory was “history and a positive forward for the people of Zambia and for the whole of the [Southern African Development Community] region.

“The tide of democracy is sweeping the region,” he said, adding that the partnership “will support all pro-democracy activity in the region until the voice of the people is heard”.

Four years ago Maimane was blocked from entering Zambia after attempting to visit Hichilema in prison.

There have also been messages of congratulations from DA leader John Steenhuisen, who called the UPND the DA’s “sister party”, adding that Zambians have “decisively rejected the notion that Africans are forever beholden to outdated liberation movement political parties that turn the state into an extraction machine for the connected few”.

Zimbabwe’s Movement for Democratic Change leader Nelson Chamisa said that he had congratulated Hichilema by phone. “Our turn as Zimbabwe is coming,” he said, with reference to his wishes to unseat the Zanu-PF party, which has governed since 1980.

Dumelang Saleshando, leader of the Botswana Congress Party, wrote on his Facebook page that transferring political power from one party to another, as Zambia had done, was “not a common development in Southern Africa”.

Botswana’s President Mokgweetsi Masisi issued a statement in his capacity as chairperson of the SADC Organ for Politics, Defence and Security, congratulating the people of Zambia “for consolidating democracy in their country and the region through peaceful elections”.

Many presidents, including President Cyril Ramaphosa, are yet to congratulate Hichilema on his win, but many are likely to travel to his inauguration next week.

Opposition leaders may want to draw lessons from Hichilema if they ever want to upset the status quo in their countries. Hichilema said he used “an army of underground volunteers” to help fight the election battle. “They worked quietly,” Hichilema said. “On top you could not see them. I knew. I saw them every day, and when I saw them I smiled and I knew that they were doing the damage. Look at the results!”

His party also capitalised on the youth bulge in Zambia. Hichilema, referring to himself by the nickname meaning “father” that young people gave him, said the victory “doesn’t belong to Bally. This victory belongs to the men and women of Zambia, especially the youth.

“You started by registering in large numbers under very restrictive and difficult conditions,” he told young people. “I think the signal was sent that the youth of Zambia in the majority had taken a decision for the 2021 elections.”

He thanked young people for standing in the long queues at polling stations on Thursday to “vote for change”.

He said: “The energy and passion that was exhibited by this young population, this population that owns this country. By all probability they’re likely to live longer than others in this country, so they have the higher stake to what happens to their country.”

The three ex-presidents, who had all conceded power to opponents after elections, were said to have played a key role in persuading Lungu not to cling on to power after it became clear that Hichilema would win by a landslide. DM