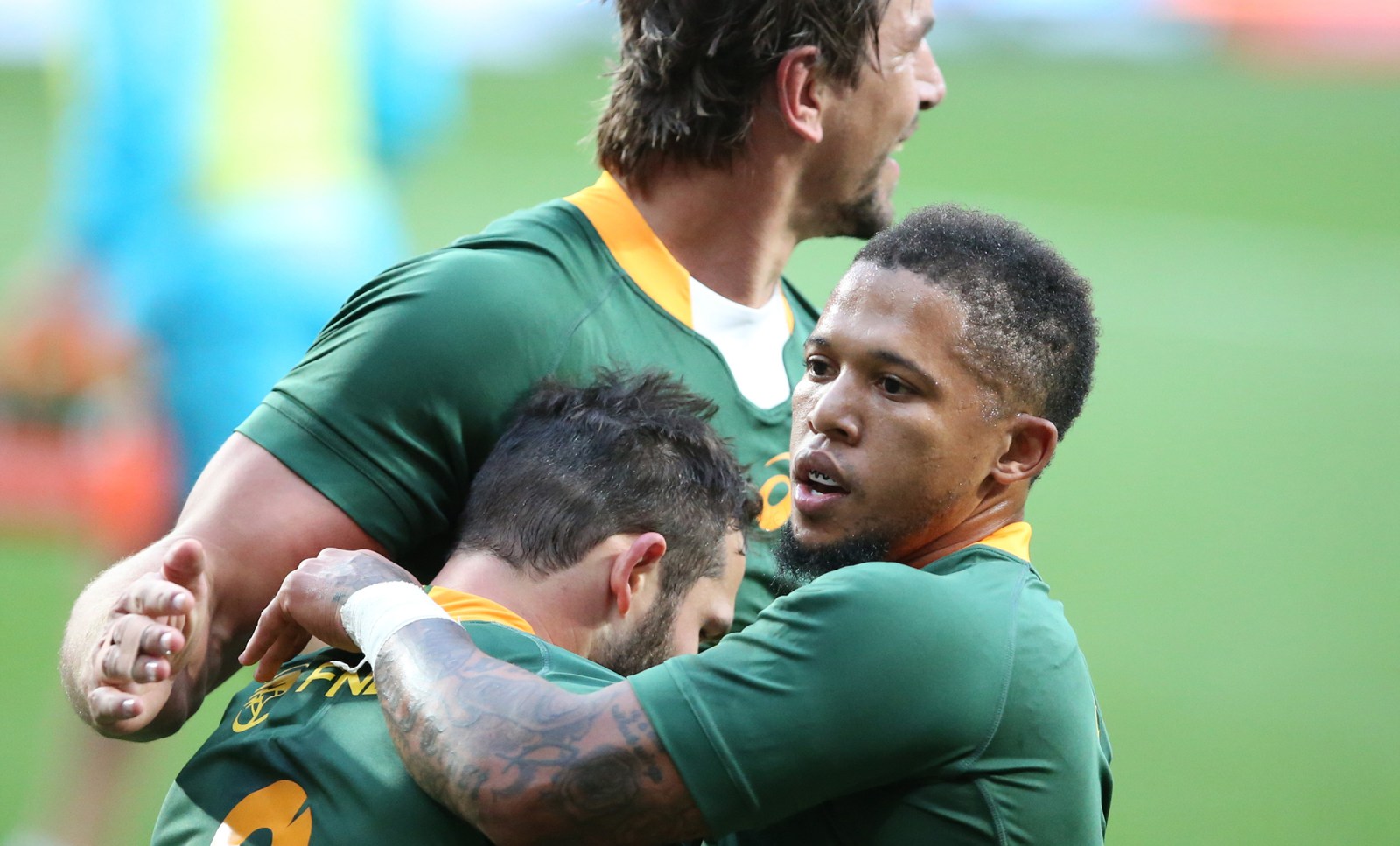 Different personnel, same outcome as the Springboks overcame 10 changes to open their 2021 Rugby Championship account with a comfortable 32-12 victory over Argentina in Gqeberha on Saturday.

The more things change, the more they stay the same for Springbok rugby as Siya Kolisi’s men clinically dispatched the Pumas with three tries to start the Rugby Championship positively.

After three gruelling Tests against the British & Irish Lions, coach Jacques Nienaber made 10 changes for this match. Several players such as impressive wings Sbu Nkosi and Aphelele Fassi and prop Wilco Louw had not played in a month.

It didn’t matter as the Boks gave the same, professional performance that delivered a Lions series triumph over the previous three weekends. It was a triumph for the collective and the team’s systems that are drilled into the entire 37-man squad, but there were also sprinklings of individual stardust.

Fassi is a superstar in the making. He oozes class with every touch and appears to have a fantastic temperament and natural rugby intelligence to go with wonderful athletic ability. He scored one try and had another disallowed after replacement hooker Malcolm Marx infringed in the build-up.

No 8 Jasper Wiese was muscular and abrasive and delivered a performance that the injured Duane Vermeulen would have been happy to call his own.

And lock Eben Etzebeth deserves another special mention. After fantastic performances against the Lions, where he was many people’s player of the series, he was again colossal.

Marauding runs, big tackles, lineout steel, scrumming power and sheer bloody physicality were all on show again. Etzebeth has always been a very good player, but in this Bok environment he is now the world’s best lock.

Those individuals aside – and there were others that deserve mention – this was a team effort that epitomised what this group is about. Most of the players who started had only played fringe parts in the Lions series, if any at all.

Yet, when their chance came, they stepped up and ensured they maintained the team’s high standards and also kept pressure on those ahead of them in the pecking order. That says a great deal about the Boks’ positive team culture while also giving Nienaber the type of selection headaches coaches love.

And after the Lions slugfest, there were some subtle attacking variations to the Bok game against the Pumas. They carried through a few more phases and created more gain-line momentum on occasions when Wiese and inside centre Frans Steyn made inroads, while there was also a little more passing off the base of rucks.

The Boks didn’t suddenly morph into a freewheeling facsimile of the All Blacks, but there was a little more intent to use the ball once they had established a healthy lead.

Primarily though, the world champions still used their accurate aerial kicking game as an attacking weapon and their smothering defence held firm despite being asked tough questions.

The Pumas simply had no answers to the clever tactical kicking of halfbacks Elton Jantjies and Cobus Reinach. The visitors were fragile under the high ball as Fassi and Nkosi competed with enthusiasm and accuracy on almost every kick.

The maligned tactic from some quarters is highly effective, especially when the Boks pull it off with such surgical precision as they did at the Nelson Mandela Bay Stadium.

Fassi’s brilliant first-half try was scored off the back of another pinpoint kick and athletic regather from Etzebeth, who chased and competed in the air like a wing. From the recycled ball, Jantjies produced a sublime kick-pass which Fassi gathered without breaking stride to score in the corner.

Earlier, Reinach scored a breakaway try when the Pumas tried an elaborate move well behind the advantage line only for wing Bautista Delguy to drop a difficult pass. Reinach, who had tracked the move from a scrum, swooped in to collect the loose ball and raced 45 metres to score.

As usual, the Bok set piece was rock solid barring one poor scrum in the second half, while they managed to win some useful territory with the rolling maul after halftime, which led to a late try for debutant scrumhalf Jaden Hendrikse.

And, despite being asked to defend 11 phases on one occasion and nine phases on another, the defence never lost shape. With so many changes to the side, the most pleasing aspect for Nienaber was how the Bok line remained unbreached yet again.

The Boks have only conceded two tries in five Tests in 2021, and both were scored by hookers at the back of rolling mauls during the Lions series.

“We knew that playing five tests in a row was a big ask and we made a couple of changes, but you could see the freshness of the players who had come in, after not playing for a few weeks some of them,” a happy Nienaber said after the game.

“We had a defence session last Wednesday and you could see that some of the guys that had played against the Lions were a bit ‘iffy’, but the new guys were climbing into the session and were raring to go.”

Jantjies landed five penalties and one conversion while Frans Steyn missed two long-range penalties. Morne Steyn failed with a drop-goal conversion late in the game as the Boks chased a fourth try, but earned a bonus point anyway for scoring three tries or more than their opponents.

For Argentina, who hadn’t played in nearly a month after beating Wales 33-11 in Cardiff, flyhalf Nicolas Sanchez scored their only points via four penalties.

The Pumas will be better for the second clash at the same venue next week after removing some rust but, then again, so will the Boks as all the players feel the benefits of more game time.

“It was a massive effort from the guys; they were excellent in what we planned to do today,” Nienaber said. “The nice thing when you make so many changes is there is a lot of energy and bodies are fresh.

“We will work on the continuity for next week. Wilco Louw last played in the English Premiership final (on June 26), Joseph Dweba has not played for five weeks, other guys the same. Jesse Kriel started cramping today and he is one of our fittest players.

“They have not played a lot of rugby, so it is important to get game-time and then the continuity will come.”