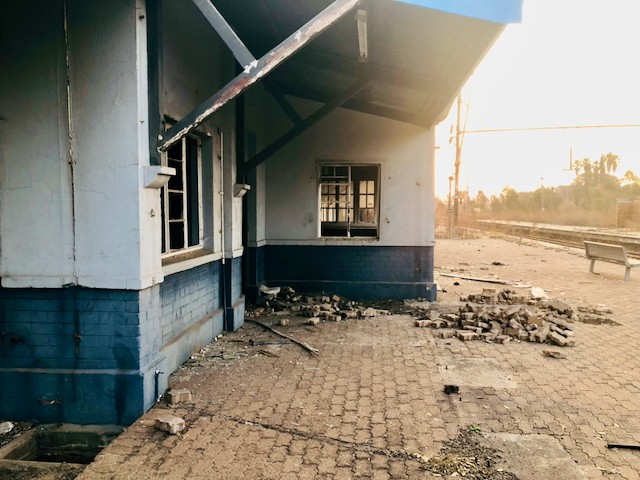 Hawker trying to eke out a living at seemingly abandoned stations say looting and stripping of Prasa property are rife.

People who used to use trains in Benoni, Brakpan and Springs say they have lost hope of ever seeing a train service again. For over a year Metrorail commuter lines have been left to vandals, including the main Springs station and substations at New Era and Pollack on the East Rand. We visited stations that have been reduced almost to rubble. Most are covered in filth, some in long grass.

While Brakpan and Springs main stations have one or two security officers during the day, we found no security at Benoni, New Era and Pollack stations.

At Benoni station, the buildings have been stripped of cables, doors, roofing material and anything made of metal. Inside the floors are strewn with rubbish. The toilets appear beyond repair. Most electric cables along the railway line have also been stripped. At what was once a vibrant station, some hawkers now sit and watch the looters strip the little that is left.

Brian Tlapane, who sells sweets, snacks and cigarettes, on what remains of Benoni train station, says he has not only lost most of his income but also the cheapest mode of transport he used to rely upon.

“l can’t remember when I last saw security officers around,” he said. “What happened in the recent looting around the country is almost similar to what we saw here. People would come in their numbers and strip cables before my very eyes. Some helped themselves to roofing material, doors, tiles and even door frames. All we could do was just watch … The most painful thing is that no one was there to stop them,” said Tlapane.

“I only cry for our beloved trains because nothing can ever be the same again. I survived on selling goods right here and it was enough to look after my family, but those days are long gone now. The station was once a marvel to look at but those are now only memories.”

Brakpan station buildings are still standing but they are filthy and stink of excrement and urine. All the cabling has been stolen. A single security guard doesn’t stop the thieves. The passages are a garbage site. Homeless people and sometimes drug users shelter in the buildings.

David Zwane, a long-time hawker at the station, sells snacks and sweets. Also a musician, he used to sell his CDs on the trains. “People continue to steal cables in broad daylight and no one stops them … It’s amazing what thieves can do when there is no security,” he says.

“I’m pained by what the station has become — dirt everywhere. I’ve spent 30 years here and never thought this would happen. I hang around hoping that things will get back to normal one day,” he says.

Bongani Masego, from Kwathema, says, “I love this station because it helped me raise my kids. I would catch a train here and sell my sweets and chocolates inside the carriages, all the way to Johannesburg and back. I still do the same business on the streets but it’s not the same as when trains were moving. If only trains can start moving again.”

In a passage, GroundUp found a drug user injecting himself. He introduced himself as Sbu. “I was once a motivational speaker on the trains. Sometimes, l would sing for a fee,” he says. Sbu now strips cables from the station to get cash for his drug habit.

New Era and Pollack substations on the Springs route are completely deserted. The abandoned buildings have been stripped bare, pitted with holes made by people looking for wires and cables. Inside were some blankets belonging to homeless people.

The main Springs station has been stripped of cables. Passages and the grounds are covered in litter. An abandoned train stands at the platform. It appears remarkably intact.

Alom Bhuyian, who has a restaurant at the station, has been unable to pay his rent of R3,500 since March 2020, when trains stopped running. He faces eviction.

“There has been no electricity here … even before the pandemic. All the cables were stolen because there is no security. How can one do business in such a place? I’ve refused to move. They should repair the station so that l can work again,” says Bhuyian.

Stembiso Kavi, from Daveyton, is one of a number of unemployed youths surviving by stripping cables from around Benoni station and selling them to scrapyards. He has been living this way for the past three months. We met him climbing one of the electric poles. He takes his time. A friend is posted as a lookout.

“This is where my bread has been buttered … It’s rare to come across police or security. But we are always ready to make a run for it,” he says.

He can get up to R500 a day selling stolen cables. Before the copper cables ran out he made even more.

“I’m not the only one. Many people come here, it’s only that much of the copper has been stripped … Taking cables is easy money. The risk of electrocution is zero because the power stopped working ages ago,” says Kavi.

Prasa responded that it is aware of the situation and a roaming security team was put in place to patrol Gauteng West and East. As of September, there will be an addition of 1,682 security personnel in the region.

Prasa said it prioritised cleaning only at active stations.

Prasa said it is rolling out a programme to rehabilitate the badly damaged stations and associated rail infrastructure. The Benoni station improvement is planned for the 2022/2023 financial year. Estimated costs are approximately R4-million for Brakpan, R7.3-million for Benoni and R6.2-million for Springs.