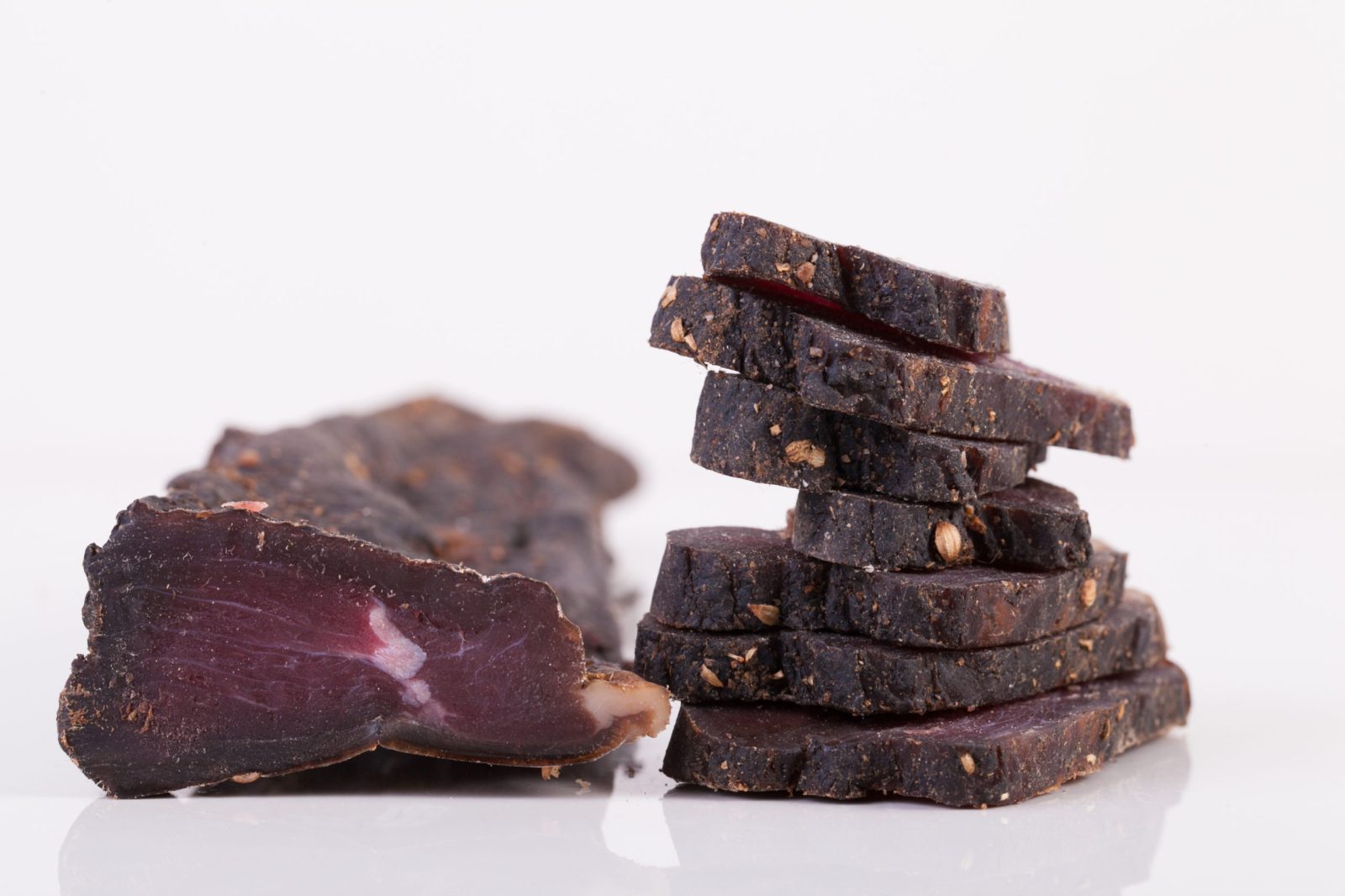 Everybody in the world seems to have heard of biltong. South Africans abroad crave it, seek it out, sometimes find it – and when they do they often find it lacking. Somehow, it just doesn’t taste the same. Like a pint of Guinness drunk in Ireland, and Guinness drunk in London or Johannesburg, it’s somehow not quite right. In 1996 we spent two weeks driving from Dublin to Wexford, via Killarney to the Ring of Kerry, then to Galway and back across to Dublin, drinking Guinness in pubs and restaurants, every day. When we arrived back in London, I walked into a pub and ordered a pint of Guinness. Just indefinably not quite there. I’ve barely touched it since.

Is it an indefinable something that characterises perfect biltong? Is it simply the coriander, that crack of a bit of this hard seed here and there as you bite off and chew? Is it the fact that the beef or venison used to make it has been reared on South African soil and grazed on African veld? Is it the vinegar, hardly discernible but undoubtedly adding something to it? The black pepper that adds a pleasing sharpness? And that saltness we love in our billies…

And you know you love something, you know that something has a place in your heart, when you give it a diminutive. A pet name. Billies, you beauty. We love you, mwah!

There are some rules:

The vinegar should be brown, not white (brown vinegar is sometimes called malt vinegar.) Sometimes a 50/50 mixture of brown vinegar and Worcestershire sauce is used. (Some recipes these days call for red wine vinegar or even balsamic vinegar. Nee man! And if a recipe calls for white spirit vinegar, move on.)

The salt should be coarse, not fine.

The meat: Don’t get too fancy. Silverside (beef) is widely used, sometimes topside. Some recipes call for rump; this is not traditional. Some commentators say biltong calls for the finest beef cuts such as fillet or sirloin (even Wikipedia says so). Many traditionalists would disagree. Anyway, wouldn’t you rather keep your sirloin, rump or fillet for a steak dinner?

The cut: normally the meat is sliced along the grain, not against it. But it is sometimes cut across the grain depending on the cut being used. Some people say 1 cm thickness is ideal, others up to 2 cm or 2.5 cm. Me, I like a thick stukkie billies, nice and rare in the middle.

The seasoning traditionally would be ground coriander seeds, black pepper, and salt; sometimes paprika or Cayenne pepper. Worcestershire sauce is often also used. Some recipes call for cloves, allspice, or powdered garlic; most of us would stick to those basic biltong aromatics of salt, black pepper, coriander seeds and brown vinegar.

Ageing: The cured meat should be hung to dry in a ventilated space for four to five days or up to seven. Some dry it for considerably longer, even two weeks. Consider how wet or dry you want it to be. I’d go for less rather than more time.

Fat content: Although fat is regarded as an important part of a quality piece of biltong, it should not have too much. Best to find a balance so that you have the joy of that lean, soft meat that’s still a little pink in the middle, and an edge of luscious fat without that nasty cloying quality (or lack of quality) that too much fat can give.

The late Lannice Snyman’s recipe for it in her splendid tome Rainbow Cuisine keeps it very simple: her recipe uses only lean beef or venison, coriander seeds, salt and black pepper. The seeds are roasted in a dry pan and then crushed. Then they’re mixed with salt and pepper, spread on a glass dish, and the meat strips are layered with each layer seasoned. After a day’s refrigeration during which they’re moved around now and then, they’re hung to dry in a suitable spot such as “the garage rafters or behind the fridge”, for about five days.

Interestingly, her recipe does not include vinegar. I phoned her daughter Tamsin while writing this and she unearthed her mom’s old database to check this out for me. Tamsin confirms that Rainbow Cuisine’s recipe indeed did not call for vinegar, and Lannice was meticulous in her research and methods. However, when the book was revised and reprinted as Tortoises & Tumbleweeds, vinegar was added to the recipe. The revised recipe also called for “wine or cider vinegar” (meaning wine vinegar or cider vinegar), not brown.

These days of course, these being the times of gadgets for anything and everything, there’s all manner of biltong gear to be had, from slicers and cutters to biltong cabinets, boxes and drying machines, and ready-mixed biltong spice blends such as Freddy Hirsch. Sometimes there can be too many gadgets in one’s cooking life though. Somehow the old Voorktrekkers seemed to manage without them while dragging their wagons across mountains without any roads. Mind you, they had good ventilation.

Having said all that, biltong can also be thought of as an ingredient of a dish. So, presuming that you have either made or bought some really good billies, start thinking about dishes in which biltong could be the hero or even one of a number of ingredients of equal status in a recipe.

Biltong carpaccio, for instance. For this you’d need very rare, “young” biltong which, when sliced, is nicely pink and supremely soft, to be dressed with such elements as lemon juice, fresh herbs, cracked peppercorns, capers or caperberries, something sweet such as a scattering of very finely chopped dates, and/or wholegrain mustard.

Biltong makes a fabulous soup, and one that can take a hint of liquor such as brandy or sherry. I also make a creamy biltong soup in which I use cream as well as coconut cream, onion, garlic, coriander seeds and coriander leaves. I also sometimes make a biltong and blue cheese soup, and that’s a winning combo.

Pasta is a vehicle for so many things, and biltong can be among them. Fill pasta parcels with cream cheese mixed with small pieces of soft biltong, and serve with a cream sauce with perhaps some blue cheese crumbled and melted into it, as biltong can take the strength of a strong cheese. A biltong pasta sauce would also need to begin with simmered onions and garlic, of course, and a herb such as thyme would be a good match. Mushrooms pair well with biltong in a sauce. Biltong is also an interesting addition to macaroni cheese; just include some slivers of soft biltong in your sauce before combining it with the noodles and baking it. It also makes a great pâté or dip, such as my recipe for biltong pâté.

I’ve even seen biltong paired with basil, which is interesting, though I’d have to try it before being prepared to vouch for it. Biltong and basil, hmmm. Good food needs more than cool alliteration. DM/TGIFood