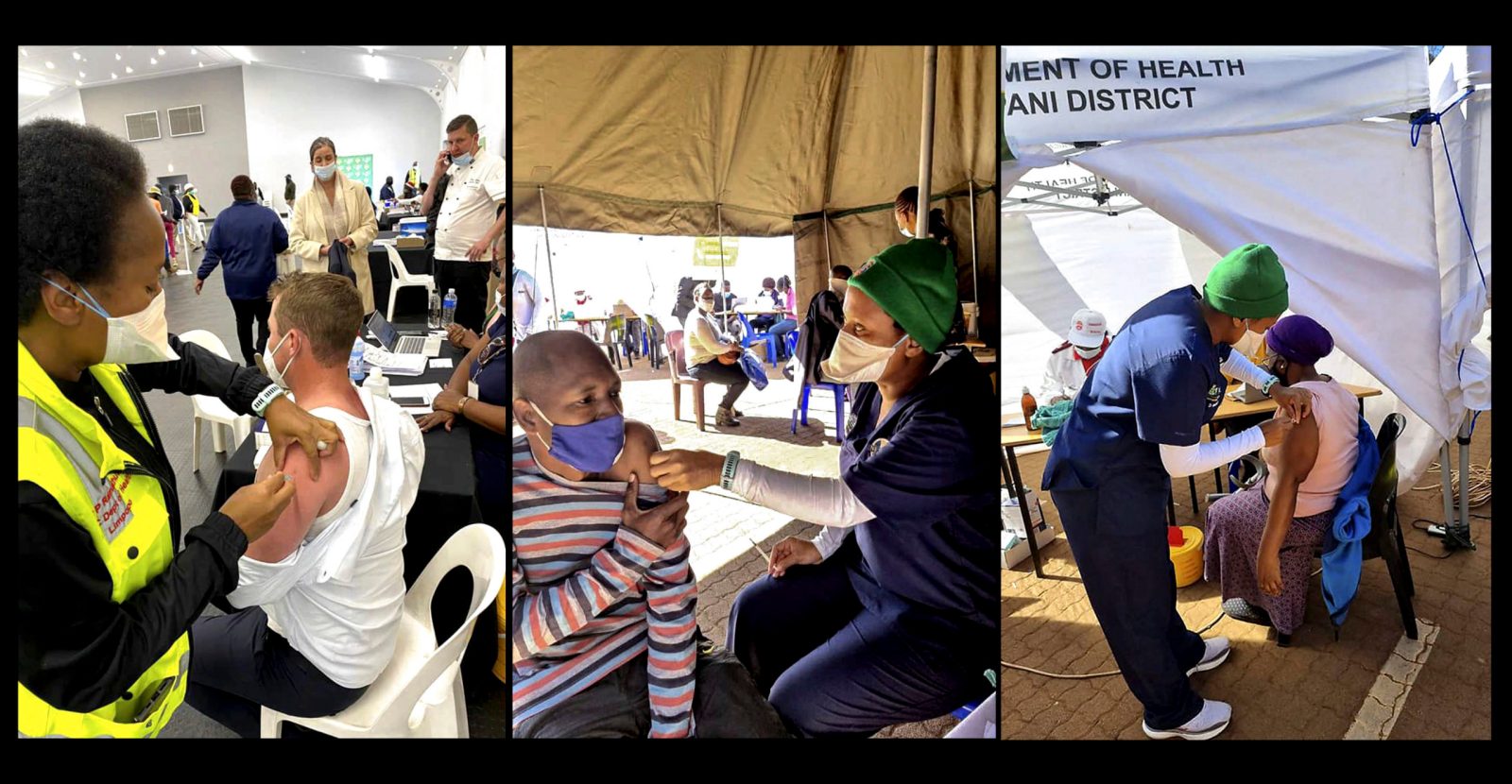 People getting their Covid-19 jabs at sites around Limpopo. (Photo: Limpopo Department of Health)

Confronted with a large rural province and limited resources, Limpopo health authorities have implemented a strategy of small steps - including a 'hub and spoke' system and focusing on what a single health worker can achieve in a day, to make significant strides in getting the province vaccinated.

Taking baby steps and emphasising how a single healthcare worker can contribute have contributed to a successful vaccination strategy for Limpopo , provincial deputy director-general for healthcare services, Dr Muthei Dombo, said on Friday.

The starting point was emphasising how one person can help and what they can do.

“We said we will keep things simple,” she added, explaining that they were intent on designing a strategy that fitted the province.

Dombo said they looked at the province’s service delivery platform – 481 fixed facilities and 109 mobile clinics that visited 2,720 points during the month. This provided more than 3,000 points of contact to administer the vaccine.

They also had 169 vaccinators who were available without needing to draw on limited hospital staff.

“We believed we could administer around 8,000 vaccines a day,” Dombo said. This meant each vaccinator had to administer 50 a day.

She said that when the Sisonke trial started to get health workers vaccinated they expressed their unhappiness with the arrangement as they were concerned about the time it would take and had challenges with the voucher system. Only two hospitals in cities were initially identified as sites for the implementation study.

After a discussion they were allowed to modify the plan and introduce a system that worked better for Limpopo.

This “hub and spoke” system – using one hospital per district as the central facility and district hospitals as the “spokes” – worked well and they decided to use it again when vaccinations for the general public began.

While it took 12 weeks to inoculate 33,000 health workers, by learning what worked for them they vaccinated a similar number of teachers in just two days, said Dombo.

They had also learnt to increase vaccination outreach programmes.

“In the beginning we focused on the hospitals and fixed sites for the elderly. But as soon as we got more confident with our management of the vaccination process, we moved out into the communities.”

Using influencers and religious and community leaders had paid off, too, with the ZCC Church in particular helping to convince people to get the vaccine.

“We use the rule of one. We said if every one of our community health workers can register one person a day we can register 9,000 a day.” In this way they had managed to register more than 42,000 in three days.

Dombo said outreach teams also visited farms and sport and recreation facilities over weekends and went from home to home to find the elderly who were not mobile enough to get to the vaccination centres.

The teams also went to the offices of tribal councils, community halls and malls, and set up a drive-through vaccination station.

“We are very proud. Yesterday we had more than a million people registered. We have also managed to vaccinate just over 20,000 people in 24 hours.”

Next, Dombo said, they plan to increase outreach programmes at universities and ramp up vaccinations at clinics and mobile clinics.

Challenges remain, such as sporadic supply, internet connectivity and vaccine hesitancy, but they are sticking to the rule of one, she added.

“What can one person do? What can we achieve in one place?” are the questions they ask every day. DM/MC