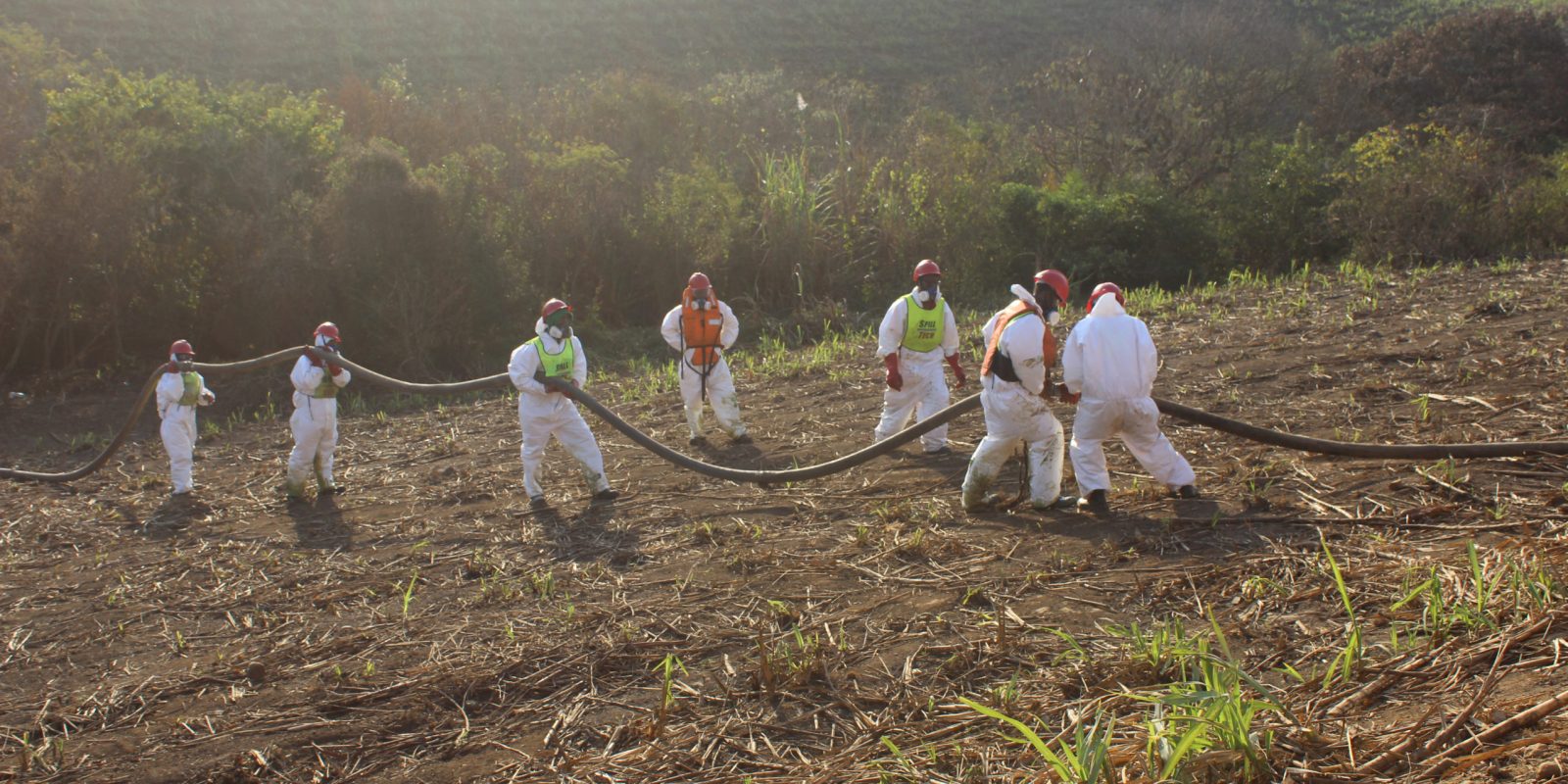 A team of toxic chemical workers connect a pipe to suck up polluted water near the UPL chemical warehouse. (Photo: Tony Carnie)

It has been exactly a month since a massive cloud of toxic chemical fumes engulfed residential areas over large parts of Durban for 12 days – but government officials and the Indian-owned UPL agrochemicals giant are still refusing to release a full inventory of the quantity and type of poisons to the public.

Jan Botha, chief executive officer of United Phosphorus Limited (UPL) South Africa, boasted on Wednesday about how big his company was on a global scale, how much money it made, how many people it employed and how concerned he was about the unfortunate impacts on people and the environment following an arson attack and explosion at the company’s brand new pesticide and farm poisons warehouse in Durban on July 12.

UPL is the “fifth-biggest crop protection company in the world”, he said. It has an annual turnover of $5-billion a year. It operates in 138 countries, holds 1,300 chemical patents, has a sales revenue of nearly $100-million in South Africa alone, employs 300 people in this country… etc.

But there were two crucial statistics he did not, and seemingly would not, disclose: the total quantity and full list of the more than 1,600 chemicals that poured into the city’s air, water, soils and sea after an arson attack on the company’s new 14,000m² warehouse in Cornubia, Durban.

Since then, more than 3.5 tonnes of dead river and marine fish have been collected, several Durban beaches remain closed, vegetation is dying around the warehouse and Umhlanga Lagoon, and the immediate and long-term impacts on human health remain unclear.

Several members of the National Assembly, the KwaZulu-Natal Parliament and community leaders demanded the full chemical inventory from Botha at an oversight meeting of Parliament’s Portfolio Committee on Environmental Affairs in Durban on Wednesday.

But they got no answer from him – nor from the KZN provincial Department of Environmental Affairs, which is leading an investigation into the human and environmental aftermath of the explosion.

“Why is there a cloud of secrecy about what and how much was in that warehouse? We want an inventory. Come clean with us. Face it like a man. Let’s get to the bottom of this,” demanded Heinz de Boer, a member of the KZN provincial Parliament.

De Boer’s call for a copy of the full chemical inventory was echoed by several others, including National Assembly MPs Thembeka Mchunu (ANC) and Cheryl Phillips (DA), Desmond D’sa of the South Durban Community Environmental Alliance, and Francine Hattingh, the founder of an informal air quality group in Durban North.

Hattingh described the frustration she encountered in trying to report her personal complaint about the airborne toxic chemical cloud to the eThekwini “pollution hotline” over several days.

“I have been so shaken that this could happen on our doorstep. I tried to phone the eThekwini pollution line for two days but there was no answer.”

On the third day, she reached an operator who asked if she could still smell the fumes in her home at that precise moment. Otherwise, the operator could not log a complaint or give her a reference number for her complaint.

So please, she urged other residents affected by the fumes, “Go online and sign a petition to ask what is happening with the air pollution, because we are not getting any answers.”

Babalo Masiphula, who lives in a shack settlement in the Blackburn village just a few hundred metres from the destroyed chemical warehouse, told the National Assembly hearing he was “very scared of what was happening in the village”.

“People were coughing. We were not able to breathe. We could not even see properly [because of the fumes]. Spilltech [a clean-up company] is trying to make sure we are safe but there are still chemicals in the [river] water next to our village… the children can be in danger.”

Living on the other side of the N2 national freeway in upmarket Umhlanga Ridge, Lyndall Valentine told the hearing that she had choked on the fumes and could taste them in her mouth. She had vomited and felt nauseous and her skin burnt.

“I’m extremely concerned about the long-term effects on myself and other residents.”

Provincial MP De Boer weighed in again, asking: “What if people get cancer in the next five to 10 years? Is there a compensation programme? Do we need to get lawyers involved to get to the bottom of this? I refuse to be part of a committee that is toothless.”

It seemed to him that: “They are drawing their wagons together for legal reasons. I would ask you to summon the company and their legal representatives to Parliament and question them on all these issues, because today we have received nothing but what we were supposed to hear – but not what we needed to know.”

Serious incidents of pollution of people and the environment would keep on happening, he said, until the perpetrators “get locked up in Westville Prison – and that ultimately is what needs to happen”.

“We can’t just do things for expediency in the name of economic development or IDZs [industrial development zones]… what about the risks?” asked Singh.

“There has to be some sort of inquiry on how this company was allowed to operate. Somebody or somebodies have to be responsible, whether they are in government or whatever,” Singh said in an apparent reference to the absence of any environmental authorisation for the new, now gutted major chemical storage facility next to several residential areas.

Bongani Mthembu, of the South Durban Community Environmental Alliance, said people living in informal settlements such as Blackburn village did not even know which number to call if they were concerned about their health.

“This was a chemical catastrophe and there are long-term effects,” he said, adding that UPL made profits in the billions but did not appear to have measures in place to ensure people’s constitutional right to a safe and clean environment.

His colleague D’sa wanted to know why the provincial government was allowing UPL to appoint its “own consultants” to investigate the impacts.

Instead, the government should be appointing independent consultants at arm’s length from the company.

“He who pays the piper calls the tune. I’m worried about that. Companies can’t just do their own thing.”

How many other hazardous chemical warehouses were there in Durban and elsewhere in the country? he asked, demanding that community groups be included immediately in the Joint Operational Committee investigating the aftermath of the explosion.

What did the company and the government officials have to say in response to all of this?

UPL South Africa chief Botha insisted for his part that his company’s (ex) warehouse was a “state of the art” and “fit for purpose facility” with fire containment systems that were “more than adequate for reasonably foreseeable risks”.

And yet, despite a clear opportunity to reveal the exact quantity and types of poisons stored there, he opined that there were “complicated legal consequences” to the investigation into the fire.

“UPL believes that now is not the time for apportioning blame,” he said.

Senior provincial department official Siphumelele Nowele (who later confronted this Daily Maverick reporter to demand who had allowed him to attend the National Assembly meeting and warehouse site inspection) also fobbed off questions from the floor demanding the public release of the total quantity and types of chemicals stored at Cornubia.

Regarding the full chemical inventory from UPL: “Yes, it took a bit longer to get that full inventory… but as of today it has been provided.”

But, she told the meeting: “There are certain limits on what we can tell the media.” DM/OBP