Hijackers on Board: This is how Dudu Myeni tried to carpetbag the SAA Airbus deal 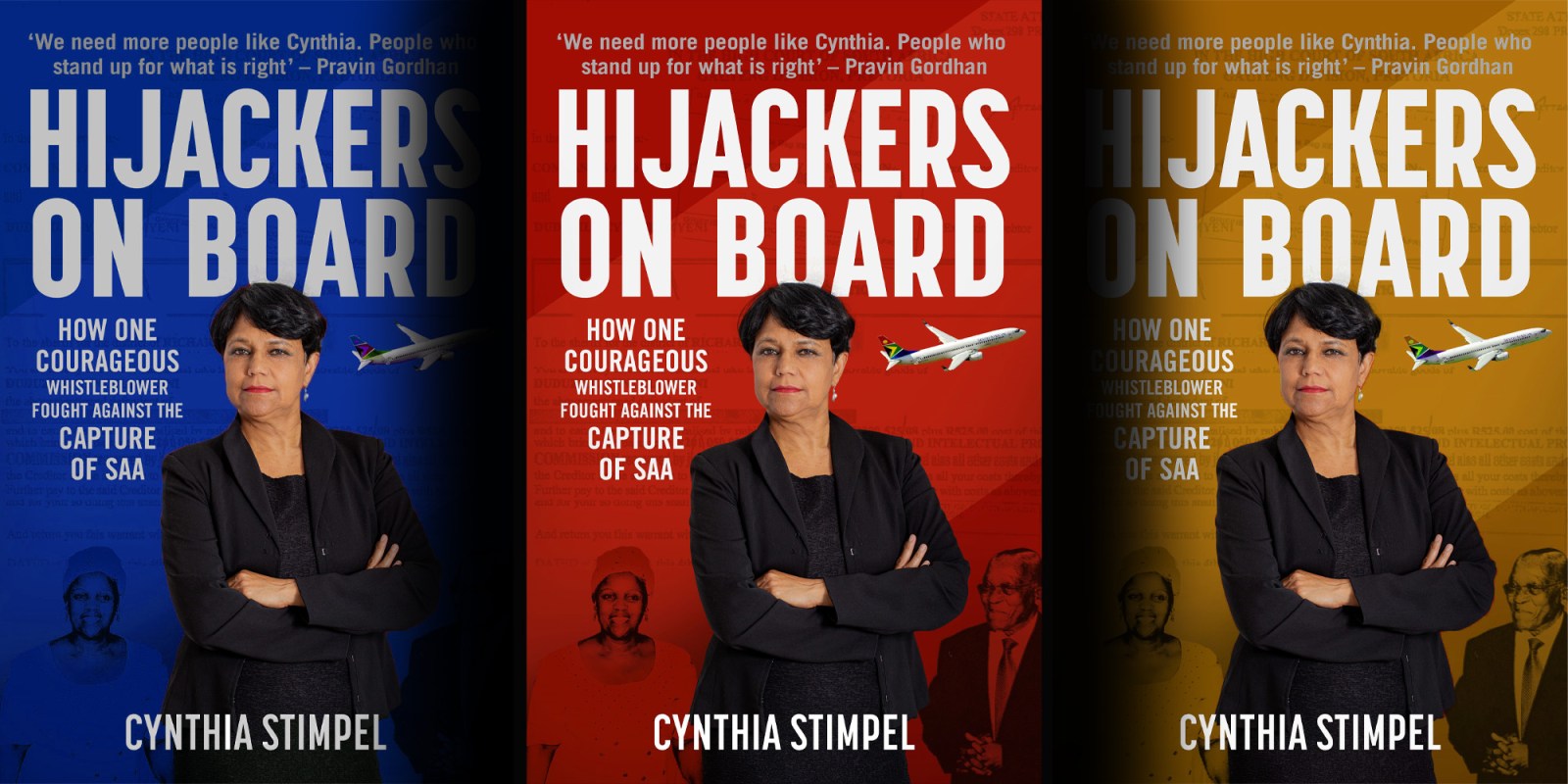 When Cynthia Stimpel received word that a dirty deal between SAA and BNP Capital had been signed off — a deal against which Stimpel had given strict orders — she didn’t hesitate. She tipped off Treasury, eventually succeeding in stopping Dudu Myeni and saving the taxpayer R256-million. Stimpel lost her job, her income and her reputation. ‘Hijackers on Board’, published by Tafelberg, is a very personal State Capture story that shows how the bravery of one individual can change the course of history.

Cynthia Stimpel is a former Group Treasurer at South African Airways. She is the co-founder of the Citizens of Conscience Foundation and a member of the Amnesty International South Africa board of directors. She holds an MBA from the Milpark Business School. Hijackers on Board is published by Tafelberg.

(Malusi) Gigaba appointed an interim board with Vusi Kona as chairperson. (Dudu) Myeni retained her seat. Siza Mzimela, the CEO, had also resigned and at the very first board meeting under Kona’s chairmanship it was announced he was going to take over as Acting CEO himself. Gigaba then appointed Myeni as Acting Chairperson in his place.

I was concerned about Kona’s appointment as CEO since I knew it could cause corporate governance problems if the chairperson and the CEO were the same person. I raised my concerns during a financial risk committee meeting and said it was not in line with the King Code of Governance.

The financial risk committee did not have the power to do anything about it, though, and in any case none of them appeared too concerned at the time.

That all meant that suddenly Myeni was in charge. In fact, I think it was planned for her to become the next chair.

Former board member Russell Loubser, who had walked out with (Cheryl) Carolus, famously said in an interview with BizNews in 2017 that Myeni never had anything to say at board meetings. They were appointed to the board at the same time.

“There were many board meetings she did not attend. When she said something, it normally didn’t make sense. Then that person gets appointed as chairperson.”

At that stage, the Airbus deal was still on the table and the board approved the Pembroke Resolution on 27 May 2013.

About a week later, on 2 June 2013, Myeni ordered the company secretary, Sandile Dlamini, to change the board meeting minutes to reflect that the decision taken was actually to purchase only two aircraft, instead of ten. The remaining eight were to be leased via an African company. Dlamini refused. But that didn’t stop Myeni. She then asked the non-executive board members in July 2013 to overturn the Pembroke Resolution. Some of them were very upset and all but one member (Yakhe Kwinana) refused to accept her request.

Wolf Meyer, who was CFO at the time, had kept accurate notes, which he referred to at that meeting to prove that Myeni’s statement about two aircraft was untrue.

I found Meyer to be a fair person. He was not stern or harsh, but he was a matter-of-fact guy. I liked him. His working environment was more relaxed than the previous CFOs, but things were focused and one knew that he worked with integrity.

The board wanted to discipline Myeni for attempting to change the board minutes and for her attempts to undermine the board’s Pembroke Resolution, and hence called a special meeting to discuss the matter. But once again, she just didn’t pitch.

Eventually, in March 2015, the board resolved to get five aircraft, instead of ten, because SAA was in a real cash crunch at that stage and that was all that the national carrier could afford.

Incidentally, Gigaba’s decision to require unabridged copies of children’s birth certificates before visas were issued — which he had implemented while in his previous portfolio of Minister of Home Affairs — had contributed to a sharp decrease in SAA’s income since we suddenly transported fewer tourists.

After further negotiations between SAA and Airbus, they agreed to lease five newer-generation A330-300s to us for twelve years, instead of SAA purchasing the original ten aircraft. This was then called the Airbus A320 Swap Transaction. The previous agreement of ten A320 aircraft would be cancelled. We would also get paid back the money we had already paid Airbus to purchase A320s. That would have meant we could lease five new-generation aircraft to our fleet and get about R1.5-billion in cash back. That proposal went through the usual channels — from the board via the Department of Public Enterprises to Treasury. This Airbus Swap Transaction was approved by the SAA board on 31 March 2015.

The Airbus Swap Transaction was subsequently approved “conditionally” on 30 July 2015, and then further approved “unconditionally” on 11 September 2015 by the Minister of Finance, Nhlanhla Nene, but once again Myeni became the fly in the ointment.

She refused to sign the execution documents. Instead, she just didn’t pitch for board meetings. And in the meantime she wrote her own letter to Airbus, asking for the reduction of the swap transaction by another three planes to only two, and involving an African leasing company.

Of all this, Meyer didn’t know a thing at the time. Nor did all the members of the board, but Myeni did not let go. She submitted a section 54(2) application of the PFMA for an amendment to the minister’s approval of the swap agreement, asking that Airbus supply only two aircraft and that another three should be acquired through an African leasing company. Her application was backed by Nedbank, who supplied an unsolicited justification document saying it would be a good financial deal. That document was drawn up by Masotsha Mngadi, Executive Client Coverage of Nedbank, whose name will pop up again later in the story. According to him, and Myeni, involving an African company would entail huge savings, since they could be paid in rands and not in US dollars, like Airbus, with no currency risk. They stated that fluctuations in exchange rates could mean the price in euro could suddenly change drastically.

However, I knew that an African leasing company, the new middleman, would have been subjected to changes in exchange rates in any case because all aircraft are purchased in US dollars, the standard international currency. To my mind, they would not remove the “currency risk” involved in making a deal directly with the French company.

In the meantime, I had my own concerns about the board being involved in the funding of aircraft.

In November 2015 I received an email from National Treasury. They had received Myeni’s application and were testing the waters, enquiring whether our department was aware of a plan to amend the swap deal, as they were concerned about the currency risk exposure.

I replied that I was unaware of it and also that the proposed plan definitely contained currency risk exposure as well. Such an African leasing company would pass all currency changes in price on to us. The company Myeni introduced was called Quartile Capital, an investment group based in Illovo, Johannesburg, which was run by Harmony Gold non-executive deputy chairperson Modise Motloba as the CEO.

I looked at the documents sent to me by Treasury from a treasurer’s perspective. Why did Myeni bypass the treasury department, I wondered, if there was a foreign exchange risk? I needed to be informed of that. Secondly, it would obviously impact our cash flow, but she had apparently not involved the finance department, either.

I called a member of the fleet management committee and asked them about the proposal, but was told that they had also been bypassed. Under normal circumstances, they would have initiated a plan like that. “This is what we want to do,” they would have said, “and can you give us feedback about any of the associated risks?”

The fleet committee would have prepared the applications and taken them to the board for approval. The board would then have taken them to the National Treasury. It was clear to me that Myeni was not going through normal channels, and was doing everything behind the scenes.

I advised the National Treasury accordingly, and I passed this information on to one of the pilots, William Rooken-Smith. National Treasury clearly also did their homework, because on 3 December 2015 it was announced that Nene had declined Myeni’s request for a revised swap deal.

His “punishment” for refusing to toe the line would come swiftly. DM