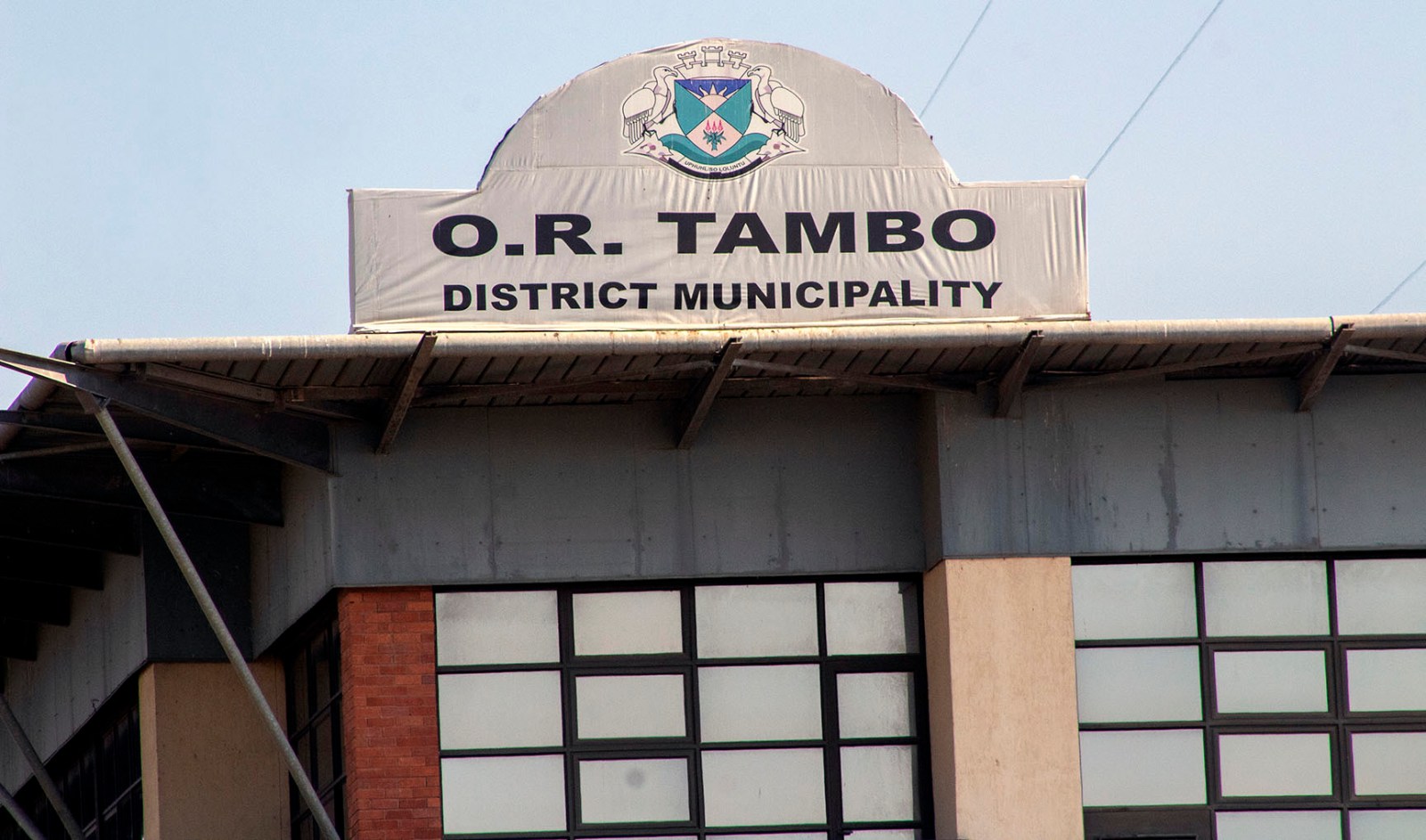 The OR Tambo District Municipality's Council has been dissolved by the Eastern Cape Provincial Government. (Photo: Hoseya Jubase)

The government’s flagship district development project has been grounded by the Eastern Cape government after it decided to dissolve the OR Tambo District Municipality following a series of chaotic events in that local government.

Following several red flags from the Auditor-General, the Special Investigating Unit and the national Treasury over corruption, maladministration and irregular expenditure, the Eastern Cape Provincial Government has decided to dissolve the council of the OR Tambo District Municipality.

Makhaya Komisa, the spokesperson for the provincial department of Cooperative Governance and Traditional Affairs (Cogta), said the decision to dissolve the council of the OR Tambo Municipality, seated in Mthatha, was taken last week.

He explained that this was done by invoking Section 139 (1) (c) of the Constitution.

“The decision was taken after the municipal council demonstrated failure to fulfil its constitutional mandate,” he said.

He cited several instances that were of concern to the provincial government and had motivated the decision to dissolve the council:

Komisa said a technical team, led by a seasoned administrator, would be sent to the municipality to “bring stability”. The decision to dissolve the municipality will come into effect after 14 days.

Their next step would be to inform all the stakeholders, starting with the Minister of Cooperative Governance and Traditional Affairs, Nkosazana Dlamini Zuma, the National Council of Provinces and municipal stakeholders in Mthatha.

By law, new elections for a municipal council must be held within 90 days.

The OR Tambo District Municipality is of particular significance in the province as it was meant to be the flagship project for the national government’s District Development Model. It is also the water services provider to some of South Africa’s most rural and vulnerable communities.

According to Cogta, the “District Development Model aims to improve the coherence and impact of government service delivery with a focus on 44 districts and eight metros around the country as development spaces that can be used as centres of service delivery and economic development, including job creation.”

Mlindi Nhanha, the Democratic Alliance’s constituency leader for the district, and Vicky Knoetze, the party’s provincial spokesperson for Cooperative Governance and Traditional Affairs, said the decision was ill-conceived and probably motivated by factional battles within the ANC.

“The OR Tambo District Municipality, like most ANC-governed municipalities, has been brought to its knees by corruption and is experiencing a total collapse of service delivery. Factional battles within the ANC are the root cause of this collapse.

“We have witnessed in recent times ANC factional battles wreaking havoc on a national level, and now these battles are also playing out at a local government level,” their statement read.

Knoetze said the decision was only announced after the National Treasury had indicated that it had decided to withhold the municipality’s equitable share.

“The municipality is in serious and persistent material breach of its obligations to provide basic services, or to meet its financial obligations. A financial recovery plan must be imposed.”

Knoetze said the law states that fresh elections must be held within 90 days after a council has been dissolved.

“If the local government elections are due to continue in February 2022, this would follow a mere two months after fresh elections in the OR Tambo District Municipality.

“It is likely that Cogta will wait for these elections to elect a new council. This will result in an entire district being without elected public representatives for an indeterminate period of time, which means no direct line of communication with the municipality.

“Citizens will be cut off from councillors, who are the very people they approach to voice their concerns about critical issues of service delivery,” Knoetze said.

Since the OR Tambo District Municipality was launched as the pilot site for the District Development Model in 2019, it has been flagged by the National Treasury on several occasions as well as by the Office of the Auditor-General and the Special Investigating Unit.

The municipality received a qualified opinion in the latest Auditor-General report for being the seventh-highest contributor in the country and third-highest in the province in terms of irregular expenditure, which was at R696-million.

The municipality is also the 10th highest contributor in South Africa in terms of irregular expenditure not dealt with, at R1.35-billion.

According to the Auditor-General’s latest report, the municipality has not dealt with R1.98-billion in irregular expenditure.

The municipality was also under investigation by the Special Investigating Unit for its water tank procurement programme and for paying R4.8-million for a controversial door-to-door campaign for Covid-19 awareness that had received “pre-dated” approval.

Nontando Ngamlana from Afesis-corplan, an organisation in the province that works to strengthen local government and community involvement, said they had anticipated the move by the provincial government, given the factional battles within the ANC.

“The municipality was mired in chaos and turmoil,” she said.

She said it does appear though that dissolving the municipal council leaves an opportunity for dysfunctional political office-bearers to be recycled into other positions without having to take responsibility for what had happened in the OR Tambo municipality.

“Eighty percent of them will probably be recycled and these are people on a proportional representation list, so we can’t even blame the residents for voting for them,” she said.

“There don’t seem to be any disciplinary mechanisms in the party about this. This is a municipality that squandered emergency funding. You don’t just dissolve it on the eve of a local government election with no consequences. It can almost be seen as a way to let people off the hook.”

Ngamlana stressed that as a water services entity the failures of the municipality had seen many taps run dry in the communities it was meant to serve.

She said putting municipalities under administration had not worked well anywhere. “Some municipalities just spend millions on consultants,” she added. “There really is no comfort that it will deliver results. Look at the Makana Local Municipality. There is no guarantee that when the province moves in that the situation will stabilise and things will be turned around.

“Also, let us remember that this was a municipality where councillors could not even approve basic planning documents.”

Lungile Mxube, an anti-corruption activist and one of the community leaders who was involved in a legal battle by residents of Makhanda to have the Makana Local Municipality’s council dissolved, said the move had little to do with service delivery and everything to do with politics.

The Supreme Court of Appeal is expected later this year to hear the provincial government’s appeal against the decision to dissolve the Makana council.

“Why is the premier using taxpayers’ money to fight the court order dissolving the Makana municipality’s council, but dissolving the OR Tambo District Municipality? It is because it has nothing to do with service delivery. A municipality like Makana Local Municipality has shown over and over that they cannot do it. The court ruled that it was a failed municipality. This judgment is being fought by the premier. We are really disappointed,” Mxube said.

Booi Malghas, one of the OR Tambo municipality councillors who was suspended from the council, said they are due in court on Thursday to fight the decision to dissolve the council.

He said they had tried their best to get an intervention in the municipality, but dissolving the council was not the answer. They were expecting to hear from Dlamini Zuma on Thursday.

He said the dissolution was motivated by an attempt “to bring in councillors that are not against corruption”.  DM/MC