Triumphant Boks face another stern test in the Rugby Championship 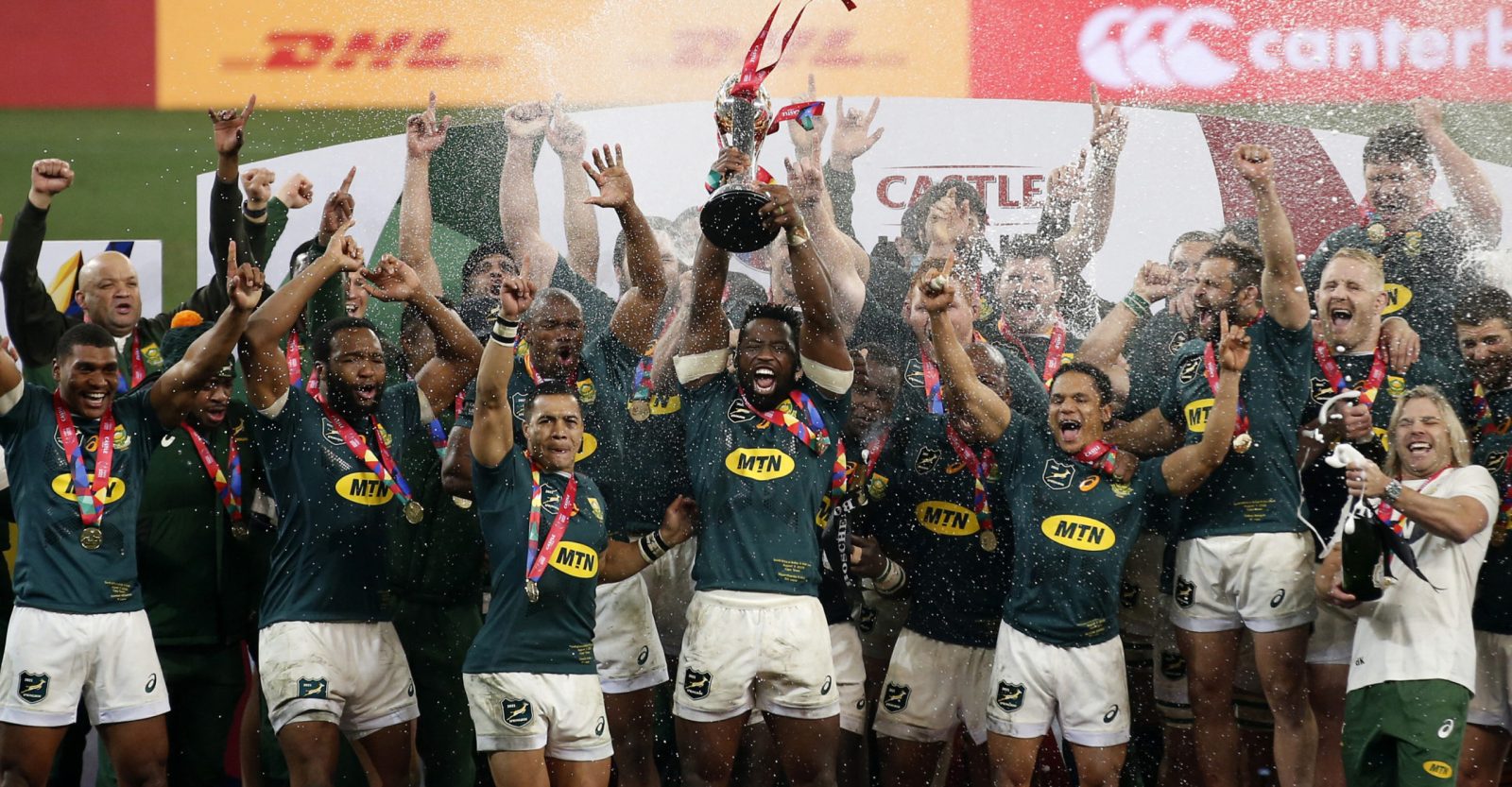 South Africa's blindside flanker and captain Siya Kolisi (C) holds the trophy as he celebrates with teammates after victory in the third rugby union Test match between South Africa and the British and Irish Lions at The Cape Town Stadium in Cape Town on August 7, 2021. (Photo by PHILL MAGAKOE / AFP)

The Springboks under coach Jacques Nienaber and director of rugby Rassie Erasmus have built a staggering list of achievements in almost no time and now they face another in the Rugby Championship.

After the recent 2-1 series win over the British & Irish Lions the target on the Springboks’ backs has grown larger. It’s not just a target because they have been winning and therefore other teams want to beat them, but also for all the joylessness the Boks seemingly represent.

To resentful northern hemisphere fans and media and taunting antipodean watchers, beating the Boks will represent saving rugby from extinction. Or something.

The Boks start the defence of the Rugby Championship title they won in 2019, with two Tests against Argentina in Gqeberha over the next two weekends before a six-week stay in Australia (and possibly New Zealand for the remainder of the tournament).

It is a chance for the Boks to make history by winning back-to-back Rugby Championship titles for the first time. That would be an astonishing addition to the Rugby World Cup 2019 title they so famously won, as well as the recent series against the British & Irish Lions.

And the Boks will know that they go into the Rugby Championship without the good wishes of the northern hemisphere after edging the Lions in a spiteful series.

The constant narrative throughout the ill-tempered Lions series was that the Boks are somehow the sport’s version of global warming sucking the life out of planet rugby.

With their forward power, smothering defence and well-versed tactical kicking game, the Boks are apparently not being true to rugby’s core principles, which if understood correctly, is scoring lots of tries.

Winning, it seems, is only to be embraced if it meets a certain style decided by an entitled sector of the rugby community.

Let’s pause there for a moment for some context. Since Erasmus and Nienaber became the de facto coaching duo, between 2018-2021 the Boks have played 30 Tests and scored 99 tries (3.3 per match). They have conceded 51 tries.

However, when you remove the 2018 season in which Erasmus had to rebuild a team, a style and a culture to be competitive at Rugby World Cup 2019, the reading is even better.

Since the start of the 2019 season, the Boks have scored 62 tries in 16 Tests (4.8 per match) and conceded just 13 tries (0.8 per game). So, they’ve managed to improve their defence while also adding another 1.5 tries per game to their record.

Yes, some of those numbers were padded out by easy games at RWC 2019 but even if you only count matches against tier one countries the Boks scored 31 tries in 11 matches (2.8 per game) in that period.

Yet the Boks traits are somehow viewed as anti-rugby. As if kicking skilfully, chasing with purpose and organisation to be able to compete to regather the ball, set piece strength and strong defence, has never mattered in rugby.

If the grousing from other parts of the rugby world is to be believed, the 15-man version of the game shouldn’t involve scrums and lineouts and simply be a sport where the ball is flung left to right for fast players to score tries.

The other laughable aspect of this narrative is that the Boks have played precisely four Test matches since eviscerating England in the final of RWC 2019 with a performance so dominant, it bordered on embarrassing for the losers. Yet South Africa is somehow killing rugby.

The Springboks must be a lot better than they really are if they can destroy an entire sport over four matches.

Another overlooked issue is the Lions approached the series in much the same way as the Boks. In other words, they placed an emphasis on set piece strength, a strong kicking game and tough defence. Both sides tried to eliminate risks in a once-in-a-generation series.

There is no doubt the fear of losing was a factor in the style of rugby played in the series — by both sides. Yet the Lions approach has only been mentioned in passing by the same people implying the Boks are murdering rugby.

But let’s look at some more, simple facts. The Boks outscored the Lions by four tries to two. Both Lions tries were scored from rolling mauls by the forwards and all of the Boks’ tries by backline players.

In the second Test of the 2021 series, the Lions failed to score a try or even a point in the second half. The Lions’ inability to fashion an attack capable of breaking down a rigid Springbok defence has been blamed on the Springboks being boring (translation: defending too well).

In 2017 when the Lions played the mighty All Blacks, the world’s best team at the time and widely considered the greatest side of any era, New Zealand only scored five tries in the three Tests. Five.

Lions series are always tight affairs and are not a yardstick of rugby’s health or otherwise. They are hermetically sealed events and bear little resemblance to the sport away from these clashes.

Fortunately, Nienaber and his players don’t really care about what the world thinks of their perceived style against the Lions. They’re not going to apologise for it, just as Italian football doesn’t apologise for its history of parsimonious defending.

Rugby, like football, is a sport played with different approaches. The only guarantee at the top level is that teams are trying to improve every week because change is a constant.

And the only way to improve is by playing. The Boks are still evolving and will add layers to their attack after missing the entire 2020 season due to pandemic restrictions.

With the Rugby Championship starting for the Springboks against Argentina in Gqeberha this weekend, Nienaber has selected a vastly changed team including six new players in the backline.

Elton Jantjies will lead the line from flyhalf and rising stars such as wings Aphelele Fassi and Sbu Nkosi will have a chance to impress. They will do a lot of chasing of kicks, that’s not in dispute, but it will be interesting to see if Nienaber brings subtle variations to the attack now that the pressure of winning the Lions series is off his shoulders.

“With the changes we’ve made, there is absolutely zero disrespect for Argentina,” Nienaber said.

“We had an open, honest discussion with the players. Argentina have played seven Tests since RWC 2019 and they have only lost one. They played twice against New Zealand, Australia and Wales and then once against Romania.

“They’ve lost one. We will have five tough Test matches on the trot — five weekends on the trot with the Lions and these two (Argentina) games.

“Unfortunately, we are in a position where we have to look at player welfare. We have some strategic goals that we want to try and achieve — our first goal will always be to win, and our second one is to create squad depth and get experience.

“This gives us the opportunity to do this. We know this is going to be a really, really tough Test match.”