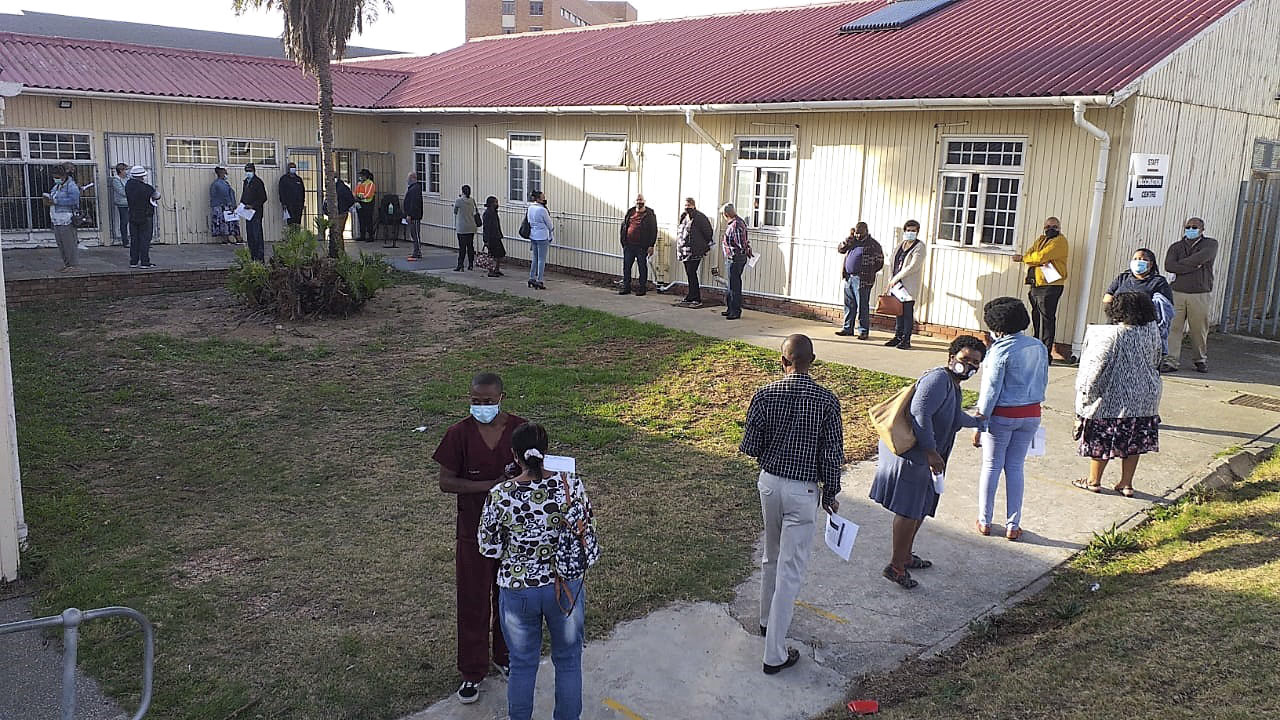 According to the Free State Chairperson of the Democratic Nursing Organisation of South Africa (Denosa), Thibogang Thole, many low-income and senior citizens in rural areas do not have transport to go to vaccination sites. (Photo: Gallo Images / Die Burger / Lulama Zenzile)

In the Free State as a whole, roughly 16 Covid-19 jabs have been administered for every 100 people. In the province’s rural districts, the number is closer to one for every 100. Spotlight spoke to some organisations on the ground and the Free State Department of Health to get the full picture.

Unions, some residents and opposition parties say the slow pace in rural areas is due to poor planning since many rural community residents cannot afford transport to vaccination sites.

According to the Free State Chairperson of the Democratic Nursing Organisation of South Africa (Denosa), Thibogang Thole, many low-income and senior citizens in rural areas do not have transport to go to vaccination sites. Thole said the provincial department of health has failed to include people in rural areas and small towns in its planning.

Both the Economic Freedom Fighters and the Democratic Alliance in the province called on the provincial health department to address the transport challenges rural communities face in getting vaccinated.

Tiger River is one of the 36 rural villages in Thaba Nchu. Thaba Nchu has a population of 701,118, with only one designated vaccination site at the JS Moroka District Hospital.

Mohlomi is among many older people in Free State rural areas who had to travel long distances and spend money to get to a site for her jab.

She said that for her to get the two doses of vaccine she had to spend R300 on transportation alone, with her second dose received on 3 August.

“I heard about vaccination on the radio station and right there I knew that I had to vaccinate. I know as a person over 60 years I am a high-risk, so it is important for me and other pensioners to get vaccinated,” Mohlomi said. “When I received a message on my phone that I must go to Botshabelo, I knew that it was impossible for us to get vaccinated in Botshabelo because it is too far [and] would be very expensive.”

She said after getting the confirmation message she went to the Moroka Hospital which is much closer to her village.

“I showed them my message and told them Botshabelo is too far for me. They agreed to help me at Moroka Hospital and they said I can come back for my second dose on 3 August.”

Mohlomi said she was happy to have been vaccinated. “But I am also very hurt that I spent so much money on transport only. This is money that I could have used to buy some food for my house and because it costs so much money to go to vaccination sites, I know that there are some of the community members in my village that did not get vaccinated because of [a] lack of money.”

“The non-provision of transportation by government in rural areas is slowing down the vaccination process and it opens up room for people to change their minds about vaccination. This also puts pressure on us nurses because it means we will be unable to reach herd immunity at the set deadline,” Thole said.

“Another burning issue in other parts of the Free State, especially Bultfontein [in] Lejweleputswa [District] when it comes to vaccination is that there is a heavy demand and a short supply of the vaccine,” he said.

The union claims people who travel from places like Bultfontein to Welkom end up being sent home without being vaccinated as they are turned away from long queues because vaccines have been finished for the day, and are told that they should come back the following day.

“Now these people who would have travelled long distances and spent a lot of money to get to a vaccination site sometimes have to find themselves being returned home without being vaccinated because there is often not enough supply of vaccine in small towns.”

However, spokesperson for the Free State Department of Health Mondli Mvambi said the vaccines cannot wait for the people.

“Vaccines are very sensitive and have to be placed in a place with adequate temperature. It is not like bread where it is just placed there in the sun waiting for people to arrive,” he said.

Mvambi said the government is doing everything in its power to ensure that vaccinations are accessible to people.

“The reality of the matter is that we cannot fetch every person from their homes. Farm areas are scattered and [it] will be impossible for us to go to each household. Also, people must understand that vaccine is a two-way street. People should make an effort to ensure that they get vaccinated.”

Mvambi said the department had placed vaccination sites in central areas to allow access to all people in the district.

“Government is doing all it can to make the vaccination accessible to all the citizens of the Free State by doing outreach programmes which include pop-up vaccination sites in those communities. We work hand in hand with different non-profit organisations,” said Mvambi.

Responding to claims of vaccine demand outstripping supply in some rural areas, Mvambi said, “The point is we cannot [risk having] wastage of vaccines. It is a risk to have an oversupply of vaccine in small towns because sometimes there are many people and sometimes not. We have to be very cautious when it comes to the vaccines. So with Bultfontein residents, I will have to verify and address the matter with district officials to see how best this matter can be tackled without running the risk of wasting vaccine.”

The South-African Red Cross Society in the Free State is one of the main organisations working with the provincial health department to provide vaccinations.

Provincial manager of the Red Cross Society, Claudia Mangwegape, said the organisation has pop-up vaccination sites in rural areas around the province where people can walk in to be vaccinated without having registered.

“What we do is that we drive around the different villages and [with loudhailers call] on older citizens who have no access to transport. We have a minibus taxi that we use to collect them from their homes to the vaccination site and back again to their homes. This is a strategy that is currently working especially in the villages of Thaba Nchu,” Mangwegape said.

“This week we are doing the same thing in Fezile Dabi District at the different farms around Viljoenskroon and Parys. We are doing this as an organisation because we know that the farm communities are not able to access the vaccination sites,” she said.

The organisation has so far operated 45 pop-up vaccination sites in villages including Thaba Nchu, Steynsrus, Koppies, Viljoenskroon and surrounding farms. Mangwegape said they had vaccinated about 100 people a day at these sites since the beginning of July. DM