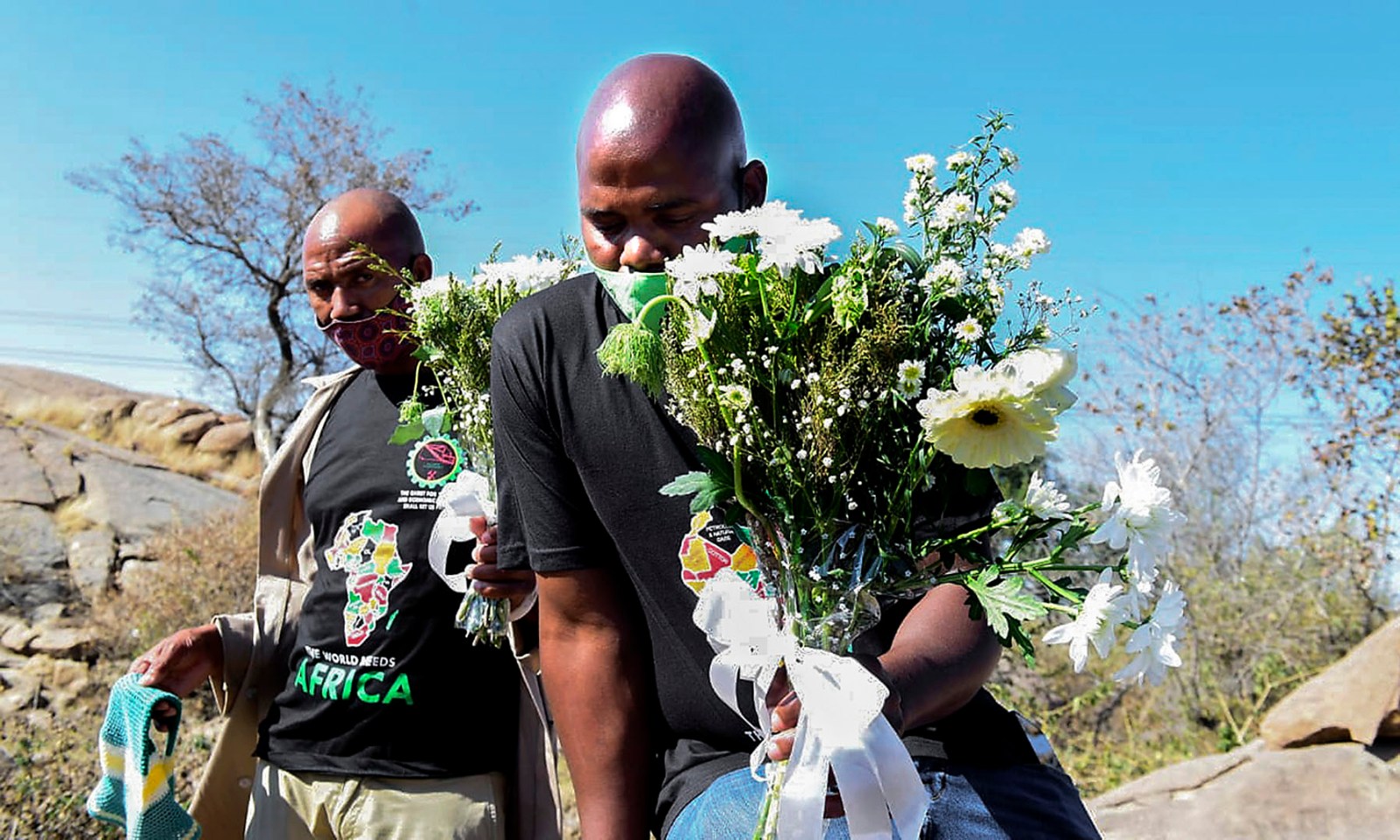 Marikana mine workers affiliated to Amcu lay a wreath at the Koppie in commemoration of the Marikana massacre on 16 August 2020. (Photo: Gallo Images / Daily Sun / Morapedi Mashashe)

‘Remember Marikana, 16 August 2012. Our democratic government massacred workers protesting for economic emancipation. Their blood still cries from the ground’. These words were emblazoned on a banner behind the podium at this year’s Marikana commemoration.

The Association of Mineworkers and Construction Union (Amcu) hosted their annual lecture on Wednesday, commemorating the ninth anniversary of the Marikana Massacre.

Speaking at the occasion, Dali Mpofu, the lawyer for the families of the slain miners, lamented that “unlike the Sharpeville massacre, unlike the Langa massacre, this was the first massacre that was perpetrated in a way by us, because in those times we could say it’s the apartheid government, what do you expect?”

Mpofu said the miners at Marikana were killed for wanting to be liberated from the same colonial and apartheid shackles of the previous government.

He said what happened at Marikana was an economic turning point in South Africa and that of the world: “Marikana symbolises the real clash between the haves and the have nots.”

Mpofu commended the leadership of Amcu for being “steadfast” in continuing to commemorate the massacre. “The battle against forgetting is so big,” said Mpofu, adding that without commemorations, the massacre would have long been forgotten and children would have grown up not knowing about it.

The keynote speaker, political analyst Xolani Dube, began by acknowledging the family members of the slain miners, saying that looking into their eyes he felt their heaviness and sadness.

“You can’t be intellectual with death… you can’t theorise it,” said Dube.

He pointed out that looking around the venue, the only people present were black. Dube said he had never seen any white people gathering under one roof to discuss the massacre. “For how long are we supposed to shed tears… to meet and talk about our pain?”

“You talk about Phoenix… I’ve been there. Don’t forget Life Esidimeni, don’t forget eXolobeni… we are being killed each and every day… how can you talk about justice when there is massacre?”

Dube said the fact that no one was behind bars as a result of what happened at Marikana showed there is no justice in South Africa.

He reminded those attending the lecture that after the massacre occurred, President Cyril Ramapahosa had “told the world that one day he would apologise”. Dube pointed out that this was yet to happen, saying he found this to be characteristic of the “arrogance” of the current leadership.

Dube warned that by killing children’s fathers without justice being done, we as a society were creating angry and resentful children who were likely to become criminals. He said this was especially so when people knew that when a loved one is killed, there is no recourse and “there is nothing they can do” about the death.

Dube accused the ANC of creating “martyrs” only for themselves, and of recognising only their suffering and not that of others, saying this was why the families of those who died at Marikana had not received compensation for the loss of their loved ones at the hands of the state.

Mineworkers need to demand a 51% shareholding in the mines they work at, Dube said, adding that the struggle for a living wage was futile and that this was the only way to honour those who died in the massacre. DM/MC