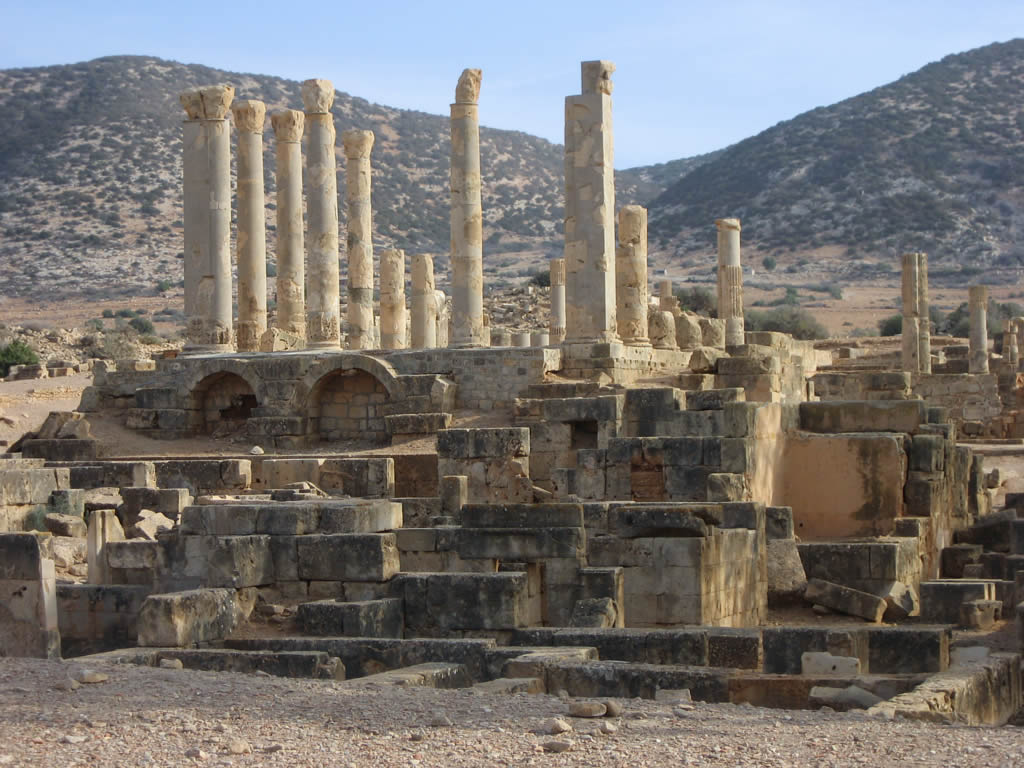 The ruins of a palace at Ptolemais, east of Benghazi. Image: David Stanley / Flickr

Despite the bloodletting, general mayhem and bad publicity, Libya is an alluring place with really hospitable people, says Don Pinnock.

Libya is a mess. The uprising against Muammar Gaddafi left the place in ruins and awash with smouldering resentments and way too many guns. Bands of men in swirling headdresses still ride beat-up bakkies bristling with firepower and you never know what side they’re on.

Before the war, it was hard to go to Libya for another reason – Brother Leader didn’t like Westerners bearing grudges for shooting down a PanAm flight over Lockerbie, Scotland. In a gap between all those hostilities I managed to slip into the country on a Turkish Air flight that was testing the possibility of restored air traffic.

It was like stepping through a History Channel screen into another world. And along the way, I discovered a leader far more important than the man soldiers shot while hiding under a culvert.

Backdrop: graceful arch with paved street. Mediterranean in the background.

Roll cameras: “Just beyond this archway was the palace of the only African to rule the Roman Empire… Here’s the story… ”

In 193 CE a new emperor rose to power in Rome in the usual bloody way. In that year Pertinax was assassinated – the standard way of dispatching emperors – and a clutch of hopefuls declared themselves Caesar.

Septimius Severus was in Pannonia (present-day Hungary) with his army at the time. He marched on the capital,  dispatched a pretender to the throne and declared the gods to be on his side. Provincial governors in the east and in Britain disagreed, so Septimius found it necessary to run a few campaigns to chop off their heads and find a suitable wife, one Julia Domna.

The new emperor was unusual in that he was not from the political snakepit of Rome, but from Leptis Magna, a Roman port city in what is now Libya. In the 18 years of his rule he was to lavish his favours on his home province of Tripolitania (present day northern Libya), consisting of the towns of Leptis, Oua and Sabratha, making them among the most beautiful cities in the Old World.

Septimius died in York (that’s another story), several Caesars later, Rome fell and, as a sort of final full stop, a tidal wave covered Leptis and Sabratha under sand. Hundreds of years later the sand was scraped away (mainly by the Italians who temporarily captured Libya as a colony) and the world was awed by the architectural beauty they found.

Never having seen a Roman city before, I stood at the gates of Leptis Magna – about 100km east of Tripoli – overwhelmed by its immensity. This wasn’t a pile of ruins. It was buildings, markets, palaces, a track for chariot races and a vast colosseum with cages for lions brought in to eat hapless Berbers and the occasional Christian. I wandered all day along paved streets and saw hardly half of it.

Down at the beach was a bathhouse with pipes for heated steam and magnificent mosaic murals of brave gladiators battling wild bulls. The city was sacked by the Vandals then the Berbers. As they say, power is chimeral.

Tripoli is the old city of Oua and there’s still evidence of the Roman period among the stone piles and alleyways of the old Medina and the Arch of Marcus Aurelius. There’s also the Red Fortress, which used to house the national museum and hopefully still does, unless the war blew it up. There were also once some good restaurants around the city, maybe a few still exist. But even back then I found the city pretty chaotic with scary, scary drivers.

Sabratha, west of Tripoli, is quite the opposite – peace and breathtaking beauty among carpets of yellow flowers. It’s a coastal city founded in the sixth century BCE by the Phoenicians and Romanised and rebuilt in the second and third centuries CE.

It has a virtually intact, three-storey Roman theatre with raked seats, tiered stage, statues and astounding acoustics, temples, baths, fountains and beautiful mosaic floors. Part of the city was submerged by the sea as a result of fourth-century earthquakes and would be wonderful for skin diving into sunken buildings just offshore. But the authorities hauled me out of the water before I could try, which is a pity. There was also a museum with coins, elegant statues and the history of Roman Libya. I hope it’s still intact.

Leptis Magna and Sabratha satiate most explorers of Roman antiquity, but out east there’s more for dedicated adventurers. Benghazi was where the rebellion against Gaddafi began and the conflict evidently rages on despite succeeding. Nearby is Ptolemais (Tolmeita), which was established by Ptolemais about 2,400 years ago and its importance continued through the Roman period. Did the basilica, Hellenistic palace, the forum and the many statues and fountains survive the shelling? I haven’t been able to find out.

The Greco-Roman city of Cyrene (now Shahat) rises on a hill with a splendid view of the Mediterranean. In the first century it rivalled Athens in size, but was torn apart by internal strife that paved the way for Roman occupation, which reached its height under Emperor Augustus.

Apollonia (now Sousa) on the Mediterranean coast north of Cyrene, has several interesting churches, a theatre that slopes gently towards the sea and relics and remains, many of which have yet to be excavated.

Though it’s not Roman, if you can avoid being shot by armed militia, a visit to the oasis of Ghadames is worth running the gauntlet. I guess it was too far from any of the uprising epicentres so it is probably still intact. It’s built on Sahara dunes southwest of Tripoli and is known, for good reason, as the jewel of the desert. It’s a uniquely designed city with warren-like streets surrounded by pure, decorative Arab buildings which gleam white against an eternally blue desert sky.

So how’s that for a tempting tour of somewhere you’re unlikely to visit? Maybe it’ll calm down sometime, who knows?

But despite the bloodletting, general mayhem and bad publicity, Libya is an alluring place with really hospitable people. It’s such a pity the mess a war makes. DM/ML