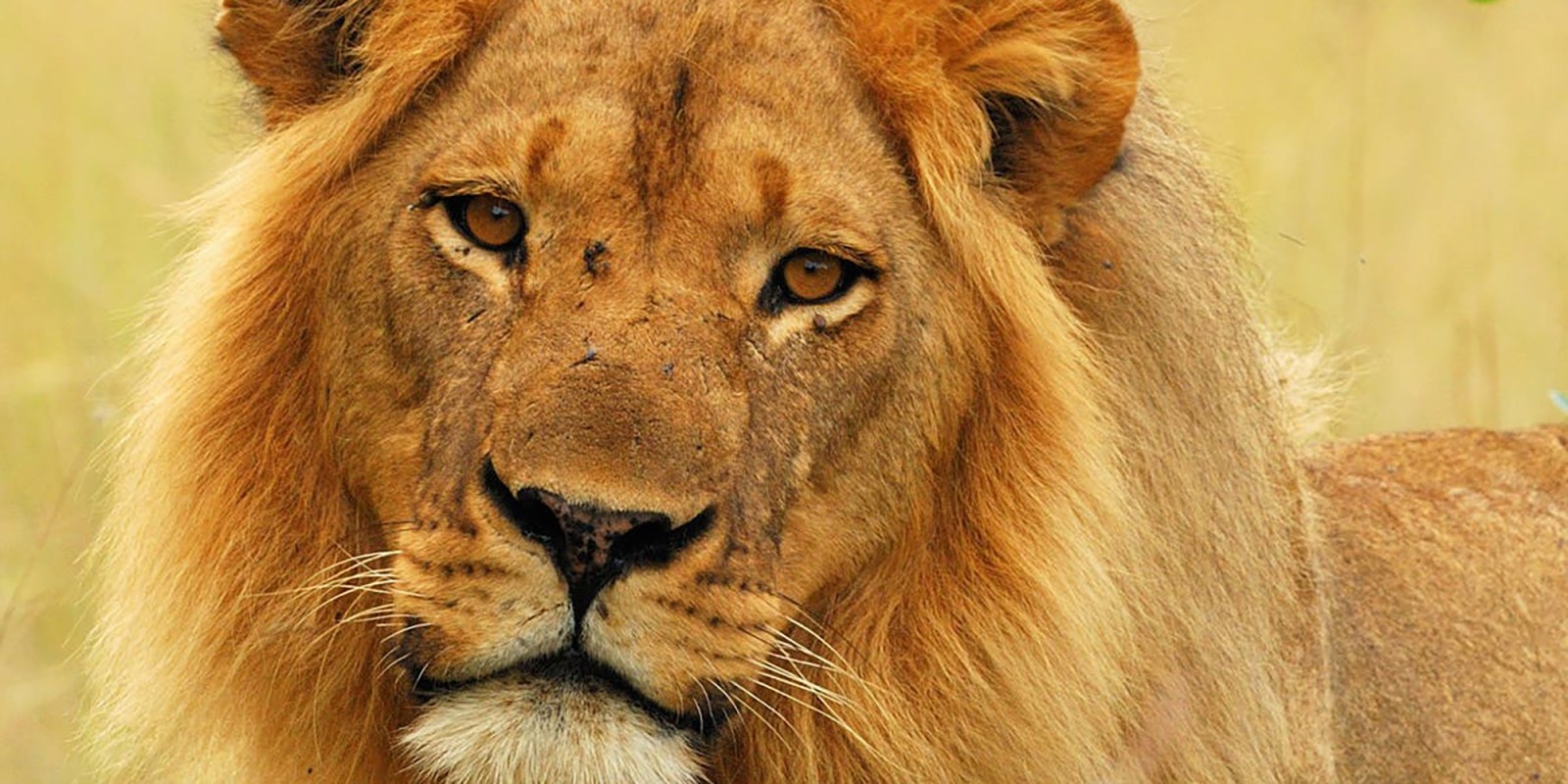 The male lion known as Mopane, killed on the outskirts of Hwange National Park. (Photo: Supplied)

The hunt was licensed, but is baiting lions and putting arrows through their bodies conservation — or money-driven cruelty?

A magnificent male lion known as Mopane has been killed in a hunting area on the outskirts of Zimbabwe’s Hwange National Park. Reliable sources say he was targeted by a bow hunter in the same area in which renowned lion Cecil was killed in 2015. Guides at the park said Mopane was as big and impressive as Cecil.

On 5 August Mopane was baited out of the park and into the Gwaai Conservancy where, six years ago, Cecil was killed by US dentist Walter Palmer, causing a worldwide outcry. Mopane was shot by a client thought to be South African, though this has not been confirmed. The operator of the hunt is said to be Chattaronga Bow Hunting Safaris, based in Limpopo. Our Burning Planet sought comment from the operator, but had not received one at the time of publication.

The 12-year-old male leaves behind the Somadada pride which now consists of two adult females and six sub-adults of about 16 to 18 months old.

Without his protection, the survival chance of his cubs has been significantly reduced as the pride is open for a takeover by other male lions. Once this happens, the cubs of the predecessor are likely to be killed by the new males to force the females back into oestrus.

Mopane was in a coalition with another male lion, Sidhule, with both lions frequently seen by photographic safari lodges in and around Hwange National Park. The coalition had been successful, the two having sired offspring with the Nyamandhlovu pride, the Nora pride and the Guvulala pride. One of the best-looking lions of the park, Netsayi, who is in charge of Cecil’s pride, was sired by Sidhule.

Then in August 2019 Sidhule was lured from Hwange and is alleged to have been killed with a bow by Colton Payne from Houston, Texas, in a hunt organised by Chattaronga.

According to Drew Abrahamson of Captured in Africa Foundation, in December 2020 an outfit called Big Game Safaris International was advertising and targeting Mopane, who was described as one of the “oldest and most aggressive lions in their hunting block. Do you want the chance to take a big free roaming lion?” said the advert. “Book a hunt with us!” The advert has since been removed.

According to Mark and Pamela Robinson of the Cecil the Lion group, the National Parks Service has confirmed the hunt for Mopane was authorised and that the mandatory permits were in place.

“We are devastated by the loss of another apex alpha male with a pride,” they posted on Facebook. “Mopane marks the 4th black-maned lion with a pride that has been killed in that area outside the park in the past several years. The biggest breeding males are being snuffed for rug material.”

Locals had been concerned that hunters were targeting Mopane. In 2019 Lions of Hwange National Park asked that people keep a watch on him and Sidhule, as they were worried about the oncoming hunting season. Mopane, they said, had become more docile since teaming up with Sidhule.

A petition was also launched to try to keep the two lions from hunters, who were allegedly setting up bait sites to try to lure them out of the park, where photographic concessions kept them protected. Tragically, a few months later, Sidhule was killed on World Lion Day, 10 August 2019. Now Mopane is also dead, no doubt to be skinned and mounted on a wall.

Supporters of hunting claim the sport’s focus is on sustainability and that the areas in which hunting takes place are not suitable for photographic safaris. They believe that using them for hunting generates revenue to maintain these wild habitats.

“But how are you protecting the wildlife if you’re taking out males from prides who frequent the national park?” Abrahamson asked. “These lions traverse the park, contradicting the hunters’ philosophies.”

The death of Mopane won’t be the last. Of the 62 lions (18 adult males, 10 sub-adult males, 34 adult females) tagged during a Hwange study over seven years by the Wildlife Conservation Research Unit at the University of Oxford beginning in 1999, 24 died through trophy hunting. Of these, 13 were adult males and six were sub-adult males.

Two years after the death of Cecil, his son, Xanda, a collared pride leader, was shot by a professional hunter named Richard Cooke just outside the borders of Hwange near where Cecil died. Cooke, it turned out, had also killed Xanda’s four-year-old brother in 2015.

Xanda was six years old and a father with several young cubs, most of whom would probably have been killed without him to defend them. There was understandable media outrage following the hunt.  An international lobby coalition, Tourists Against Trophy Hunting, called for an immediate end to trophy killing in Zimbabwe. It didn’t happen. DM/OBP