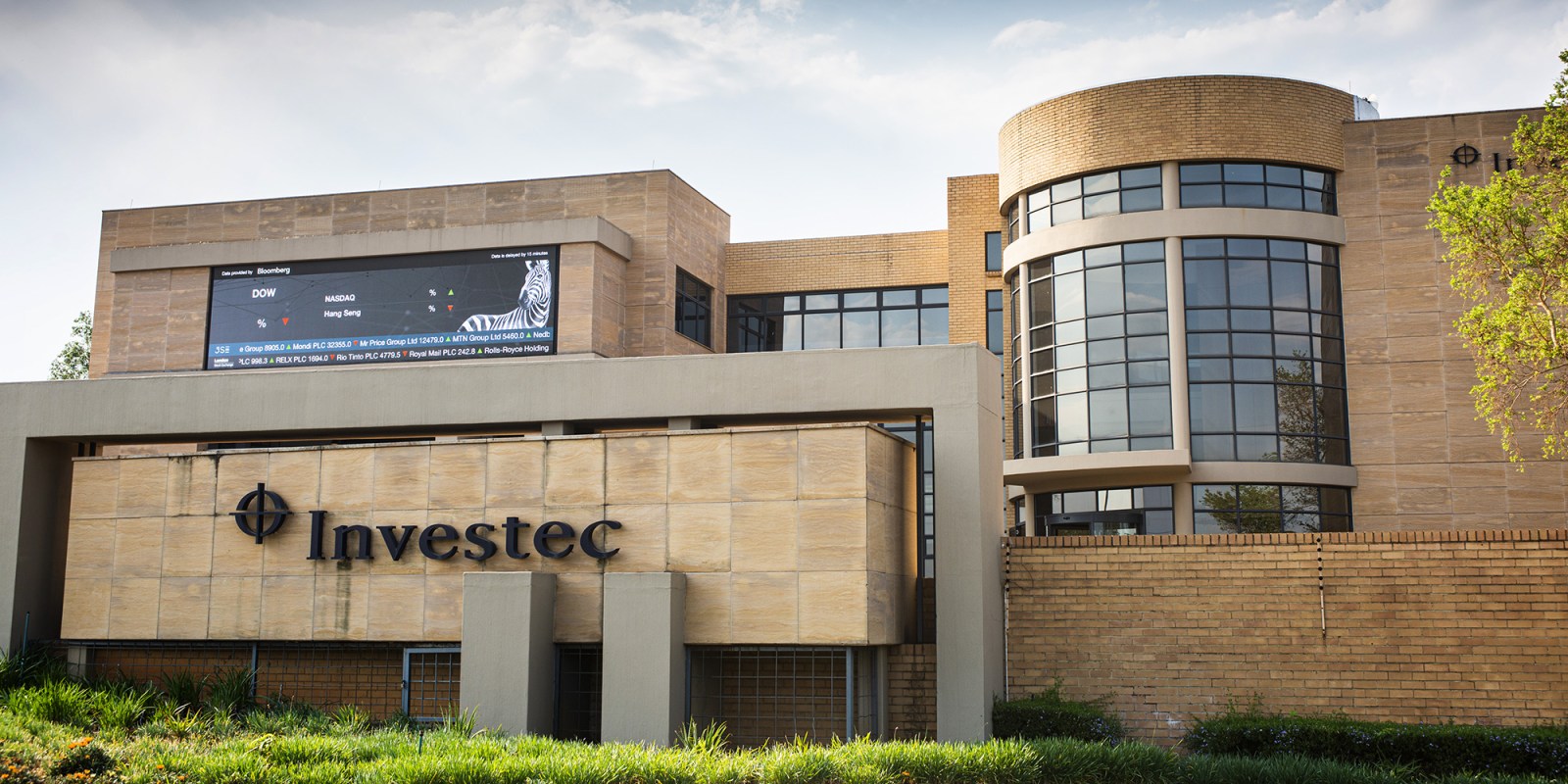 Not all unbundlings deliver value for shareholders, but in the case of Investec and Ninety One, it appears that both investors and the businesses themselves are better off after unbundling.

In the heady years before Investec unbundled its asset management business, now called Ninety One, it was earning an estimated £100-million in dividends from its cash-flush subsidiary each year.

For a capital-hungry business like a bank, this was manna from heaven, but the flows were not always invested wisely, funding a number of global (mis)adventures. These included forays into US and Australian banking, investments into Australian property, and private equity in Hong Kong, as well as the disastrous acquisition of the mortgage origination business Kensington just weeks before the global financial crisis unleashed itself on the world.

The Kensington acquisition, which left Investec with liabilities of almost £4-billion in 2008, would have sunk a lesser bank, and took a decade to unwind. As a result, Investec’s return on equity, which is a measure of profitability, fell from the high teens of the 1980s and 1990s to below 10%, with management willing it up to 12.9% by 2019.

Shareholders had a right to be disappointed.

The solution was to split the business into two, with former CEO Stephen Koseff staying on as chairman to oversee the split. Investec kept the lucrative wealth business and less lucrative specialist banking, run by Fani Titi, while Investec Asset Management, founded and run by the “unmanageable” – according to Investec co-founder Bernard Kantor – and fiercely independent Hendrik du Toit, would be unbundled, renamed Ninety One, and separately listed. This transpired in March 2020, in the midst of a market rout as the world panicked about Covid-19.

With different growth trajectories, different regulatory burdens, and different capital requirements, it was obvious that the two businesses required different outlooks. Investec needed to cut costs, simplify its business and grow profits, while Ninety One wanted the freedom to fly.

“We never saw the sense in keeping these businesses together. There was limited overlap in terms of customers and costs as they had always been run separately,” says Tim Acker, a portfolio manager with Allan Gray.

“Investec needed to stand on its own feet, focus and simplify,” adds Neelash Hansjee, a portfolio manager with Old Mutual.

With the unbundling completed almost 18 months ago, it is clear that for Investec’s Titi there are no sacred cows on the journey.

“Fani is shutting down businesses that were subscale, noncore, or fell outside the bank’s refined risk appetite,” says Acker. These included the robo adviser Click and Invest, the structured products business in the UK, and the difficult but necessary decision to wind down the Australian operations.

“What we are seeing now is more disciplined capital allocation, a focus on cost management and on improving return on equity,” says Titi.

At the presentation of Investec’s results to March, shareholders welcomed the recommitment to achieving an ROE of 16% within the next three years.

“How to improve returns is something that has dogged Investec for years. Despite all of its efforts, growth has never translated into returns in a meaningful or sustainable way,” says Hansjee. 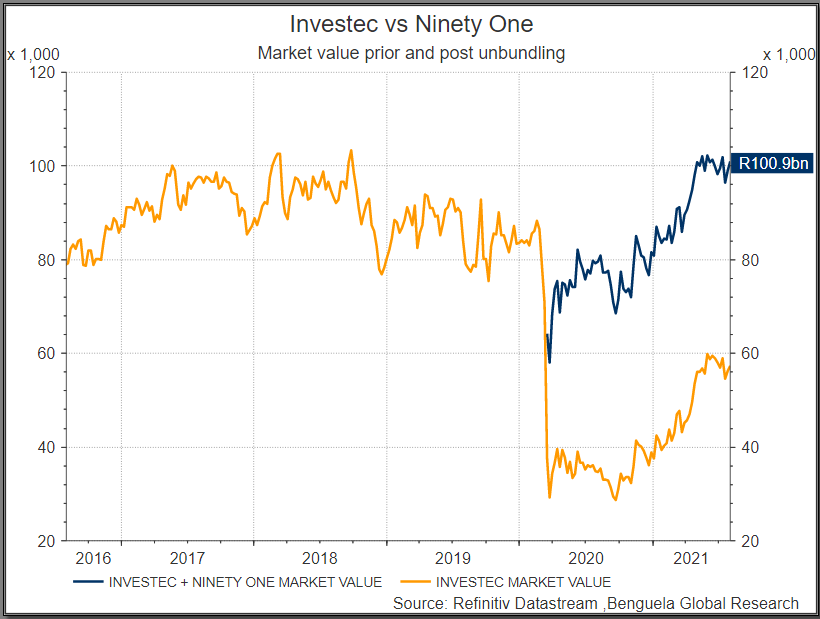 But recent results look promising. While adjusted basic earnings per share from continuing operations declined by 14.7% to 28.9% for the year to March, the second half showed a strong earnings recovery, with earnings up 58.1%. Titi indicated that this positive momentum continued into the FY22 financial year. In addition, operating costs declined by 1.8% year on year, with fixed costs down by 6.6% year on year, suggesting that costs are being reined in.

One problem that Investec faces is improving the performance of its UK bank, which has a slightly different profile to the SA bank and includes specialist divisions such as aircraft finance and mezzanine finance for private equity.

“The UK private bank is a subscale business and has been a drag from a return point of view,” says Jan Meintjes, a portfolio manager with Denker Capital. With the increased focus of the last two years, the bank is now likely to break even as its client base grows. “The business is fixable and is worth having,” he adds.

The focus on restoring the ROE appears to be paying off and if management can avoid mishaps and execute on strategy, analysts expect to see good earnings growth coming through.

“While Investec can no longer rely on a dividend stream from its former subsidiary, it has shown that in these difficult times it can still generate cash. And for the first time management has provided clear guidance on anticipated results,” says Meintjes. “It shows there is more confidence in the way they look at their business.”

While there is talk about Investec bulking up its Wealth or specialist banking businesses, possibly through acquisition, it is worth remembering that it retained a valuable 25% stake in Ninety One. It had planned to offer 10% of Ninety One’s shares to new investors on listing, but held back due to the market conditions at the time. This is now a valuable kitty that can be monetised, or from which dividends could flow.

Meanwhile, Ninety One has revelled in its freedom and vibrant global markets, despite its shaky listing. It was listed on depressed markets at R32 in March 2020 when Covid-19 was just accelerating its journey around the world, but a year later reported a record performance from its assets under management. AUM rose by 27% to £130.9-billion (R2.6-trillion) supported by positive market movements. The share price has risen in tandem, reaching R50.51 in April, before easing off to current levels of about R46.46.

Du Toit is now focused on expanding the business into the adviser market and plans to grow further in Asia and North America, where he sees long-term growth.

Building a reputation for responsible investing is another focus. The firm was the first South African asset manager to sign the Net Zero Asset Managers Initiative, which supports investing aligned with the global goal of net-zero emissions by 2050 or sooner.

Not having to pay its dividends over to the group has left management with options, says Acker. “In the longer term they may pay these to investors in the form of dividends, but for now they may prefer to build a capital buffer from which it can fund organic growth.”

While the unbundling is proving to be good for both businesses, what about shareholders? On this point, analysts agree that the unbundling has created value.

Rella Suskin, head of research at Benguela Global Fund Managers, estimates that the Investec demerger has created about R15-billion of value to date.

The pre-demerger Investec price to book of 0.96x (February 2020) was worth about R86-billion, while the current actual combined market value of the two is R100.9-billion with an implied price to book of 1.12x, she says.

However, while Ninety One is considered a high-quality, long-term investment, Investec may offer more value in the short to medium term.

“Investec continues to trade at discount to its book value whereas Ninety One trades far above its book value [> 8x] due to being a better quality business with high returns,” Suskin says.

“Overall, this is a good example of what the market is willing to pay for a higher quality business versus a lower quality business. Investec may have some recovery along with the sector but until they execute on their turnaround strategy this may not be significant.” DM/BM